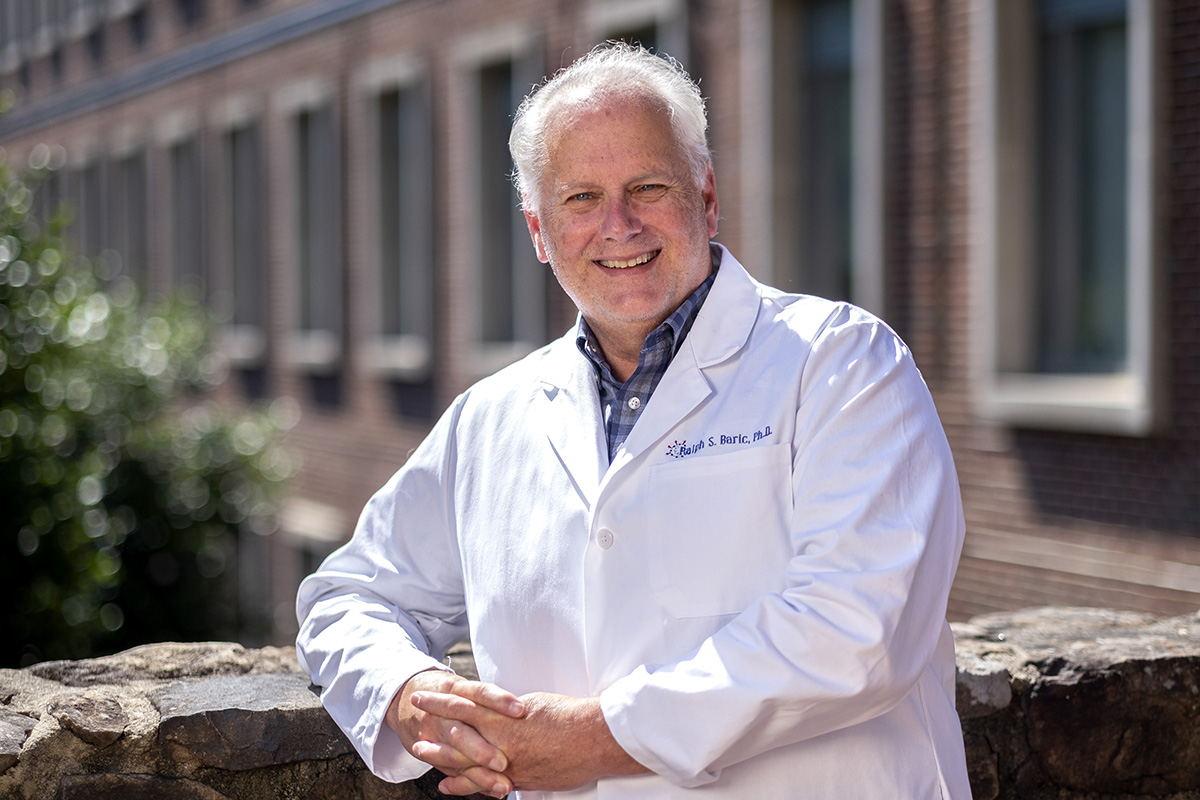 Ralph Baric, William R. Kenan Jr., Distinguished Professor at the UNC Gillings School of Global Public Health, joined the UNC-Chapel Hill faculty in 1986 as an assistant professor after completing his undergraduate and graduate studies at North Carolina State University, where he was also a member of the swim team on a full scholarship and a 7-time ACC Champion, 5-time ACC record holder and team captain. His passion for swimming, especially teaching young people to learn to swim and not be fearful of the water, continues to this day. Olympic swimming medalist Simone Manuel once observed, “For people who believe that they can’t do it, I hope I’m an inspiration to others to get out there and try swimming. You might be pretty good at it.”

This drive to take on seemingly insurmountable challenges, inspire others to do the same and make the world a better and safer place has guided Dr. Baric’s career. He has spent the past three decades as a global leader in the study of coronaviruses and is responsible for UNC-Chapel Hill’s world leadership in coronavirus research. The O. Max Gardner Award recognizes the faculty member who has made “the greatest contribution to the welfare of the human race.” In his work, Dr. Baric has studied the factors that regulate virus cross species transmission, replication, and pathogenesis, using coronaviruses, noroviruses and flaviviruses as models. His group pioneered new strategies for genetically manipulating emerging coronavirus and flavivirus genomes and studying the role of multiple viral genes that function in cross species transmission, virulence, pathogenesis, replication, and RNA fidelity. They have used novel genetic reference populations to map host susceptibility loci, genes and alleles that regulate coronavirus and norovirus pathogenesis and immunity. These basic studies and models seeded the development and testing of many countermeasures used to treat or control emerging coronavirus and norovirus infections, and especially SARS-CoV2.

The primary areas of study include three important RNA viruses of humans: the emerging coronaviruses like SARS-CoV, SARS-CoV2 and MERS-CoV that cause severe respiratory infections, the noroviruses that cause fatal diarrhea disease in infants and children, and flaviviruses like Zika and Dengue, which are the most important mosquito-borne viral pathogen of humans. His group has studied the evolutionary processes and mechanisms that contribute to virus emergence from zoonotic (animal) reservoirs, providing key targets for the development of broadly cross protective antiviral drugs and vaccines. Another common research theme is to identify host susceptibility genes that regulate viral pathogenesis. Using human studies and recombinant inbred mouse models, his group has mapped multiple host polygenic traits and genes that regulate emerging coronavirus and norovirus susceptibility and pathogenesis. A third major theme is to elucidate the functions of viral genes in evolution, immune evasion, and pathogenesis, informing the development of countermeasures designed to control disease severity after infection. Finally, his group has developed novel strategies to map major neutralizing epitopes in RNA viruses, informing structure-guided vaccine designs and identifying broad-based immunotherapeutics to prevent or control disease severity in human populations.

The pandemic of the past year was often characterized as “impossible to predict.” But Dr. Baric predicted this pandemic’s potential many years before, and his lab at the Gillings School of Global Public Health was ready for this public health crisis. They had already shown that the drug Remdesivir, along with partners at biotech company Gilead Sciences, was a broadly acting drug against all known coronaviruses and which became a treatment strategy that helped save thousands of lives curing the COVID-19 pandemic. A second drug, Molnupiravir, was also shown to be effective against all known coronaviruses in the first few months of the COVID-19 pandemic and it is currently in Phase III human testing in collaboration with Ridgeback Biosciences and Merck. His seminal research and understanding of coronaviruses aided the development, testing and roll-out of the Moderna vaccine, used by millions in the United States. In April 2021, his lifetime of work was recognized through his induction into the National Academy of Sciences, a nonprofit institution established under a congressional charter and signed by President Abraham Lincoln in 1863.

This kind of planning for the future also led to another important collaboration between the UNC School of Medicine, UNC Eshelman School of Pharmacy and the UNC Gillings School of Global Public Health to combat not only SARS-Cov-2, but also future viral outbreaks. Called READDI, Rapidly Emerging Antiviral Drug Development Initiative, the focus is on the development of broad-spectrum antivirals which attack most, if not all, viruses in a particular family, similar to the way antibiotics attack a host of bacteria.

“This is a strategy we can apply that will make drugs immediately available for future pandemics, for our children and our children’s children,” Baric says. “And I think we can have things set up so this amount of human suffering will never have to happen again. That would be my hope.”