Josh Himmelstein and Tony Rodriguez hitch a boat trailer to a truck behind the Institute of Marine Sciences. Checkered boards sit at the bottom of the boat, but otherwise, it is fairly empty.

Despite the chaos of organizing a field day, Himmelstein’s last order of business before heading out is to address footwear. The oyster shells that litter his field site will tear up thin neoprene dive booties, and the salty mud will consume any pair of tennis shoes. The lab Himmelstein works within has many pairs of thick water boots on reserve.

This is Himmelstein’s second year at IMS. He studies coastal geology, which he believes can help address issues relevant to humans, like coastal erosion.

Located in the Inner Banks, Himmelstein’s field site is a 40-minute drive northeast of Morehead City. On the way, he points to a gray expanse of bare trees.

“Those are ghost forests,” he says.

They are an indicator of sea level rise. As brackish waters rise, trees on the edges of these woodlands die from unsustainable levels of salinity. While many effects of sea level rise are visible, Himmelstein is interested in the subtler changes within the environment just bordering the forests: the salt marshes.

“It’s often hard to imagine why you would care about a stinky, muddy marsh that you get a lot of bug bites in,” Himmelstein acknowledges, “but they make up a huge portion of our coastline.”

Salt marshes provide protection to the communities they border by reducing the wave impact caused by storms and filtering out excess nutrients and pollutants from the water. Shellfish and finfish depend on them to survive, and commercial fishers depend on them to keep fish in abundance. Additionally, they are more effective at reducing atmospheric carbon than rainforests. 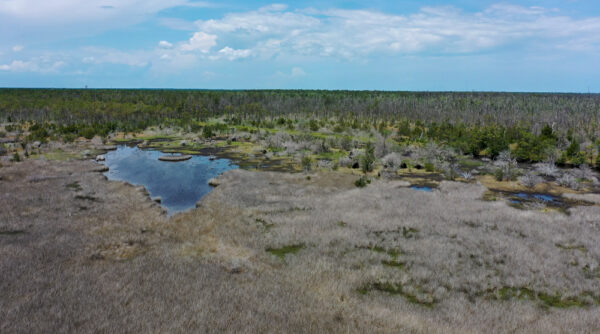 Ghost forests behind a salt marsh near Cedar Point, North Carolina, are a result of sea level rise. (Photo by Josh Himmelstein)

Sedimentation rates — how fast sediment accumulates — are the single best predictor of a marsh’s ability to survive rises in sea levels, but Himmelstein worries about where this is happening. Local fishers have complained about the increasing difficulty of navigating the channels between the marshes, and the Rodriguez Lab has confirmed that timber production and land-use change are releasing sediment into these waterbodies.

Himmelstein can track sediment deposits on salt marshes in ways that provide information on various time scales. To do this, he collects sediment cores, which involves extracting a large aluminum tube filled with soil from a depth corresponding to the time period of interest.

“In our case, we usually study the top one meter because that’s the region that humans have influenced, at least in coastal erosion,” he says. “If you’re looking for something much older, maybe 4 or 5,000 years, you could go down to 10 meters.”

Himmelstein targets the beginning of intense development in the region — the mid-20th century — so he only places tubes at 1-meter depths. For precise measurements of ongoing sediment deposition, he uses open-source optical backscatter sensors.

To understand how and where sediment is reaching the marsh, Himmelstein employs these sensors in a line that cuts through the marsh, called a transect. The sensors shine a light into the water at frequent intervals and measure how much of the light is bounced back to a detector to determine turbidity — a strong indicator of how well-positioned the salt marsh is to respond to sea level rise. In perfectly clear water, turbidity is zero. If sediment is swirling around in the water, the turbidity is much higher, which means more sediment might deposit onto the marsh and build its elevation.

Alongside the data from the sensors, Himmelstein uses drone imagery to create a realistic and accurately scaled map of the marsh. The checkered boards from the bottom of the boat are placed throughout the marsh, acting as “ground-control points” that accurately position the map on earth.

While the ecological implications of his research are exciting, the sensors Himmelstein employs serve another purpose. Commercial OBS sensors typically cost anywhere from $3,000 to $5,000. The Rodriguez Lab builds its own using an open-source design developed by collaborators at Carolina.

David Go, an undergraduate geology student at UNC-Chapel Hill, is helping with this part of the project. Having previously built sensors for Emily Eidam, a coastal sedimentologist at Carolina, Go was encouraged by Rodriguez to join Himmelstein at IMS for the summer.

With Go’s help, the lab can produce an individual sensor for about $200.

“The findings of this research have the potential to validate this open-source alternative to a technology that generally is cost-prohibitive for a lot of scientists,” Himmelstein explains.

Access to cheaper sensors also means that he can deploy more of them, gathering data on finer spatial scales.

The field day ends with mud-splattered tan lines, but this is what it’s about for Himmelstein — his hands greasy, his hair escaping from beneath his hat. Rodriguez wears a pink plaid button-up that might be appropriate for a meeting if it were not damp at the sleeves. Go sits on the edge of the boat and dumps brown water from his boots.

The once empty boat is now full of sensors, zip lock bags of sediment, mounting rods, and muck. After speeding back to the dock, the last order of business is to stop at the gas station five minutes away, where Philly cheesesteak sandwiches are only $2.99.