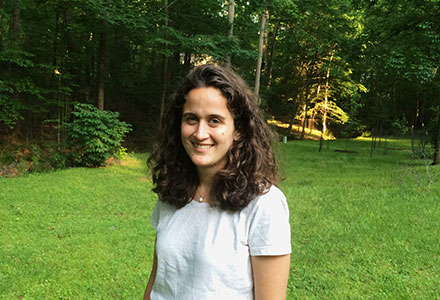 When she first arrived at Vassar College in Poughkeepsie, N.Y., Emma Woelk aspired to work in research science, but added German Studies classes “just for fun.”

That was until a study abroad trip to Germany quickly reversed her interests.

“When I was in Berlin, I worked in a lab as part of my biology major, but I realized I was way more interested in the language, history and culture of Germany and exploring that than the actual lab work,” she said.

Eight years after first roaming Germany and learning her passion for the country was more than just a hobby, Woelk will earn her Ph.D. in German Studies this weekend at the University of North Carolina at Chapel Hill’s Doctoral Hooding Ceremony.

Woelk will join 250 other graduate students who receive their doctoral degrees at the ceremony May 9 at the Dean E. Smith Center at 9:30 a.m. Susan A. Murphy, recipient of a 2013 MacArthur Foundation “genius” grant for breakthroughs that may help clinicians more effectively assess and adapt treatment of chronic and relapsing diseases, will serve as the ceremony’s keynote speaker.

But unlike the rest of the doctoral graduates, Woelk will be receiving a degree from more than Carolina, as she becomes the first graduate of the Carolina-Duke Graduate Program in German Studies, a collaborative program between the two universities. Launched in 2009, it combines faculty and library resources of the two universities.

“It’s one graduate program that’s situated at two different universities,” said Eric S. Downing, director of graduate studies with the UNC-Chapel Hill Department of Slavic Languages and Literature. “With the combined faculty we are one the largest, if not the, largest German studies program in North America.”

Arriving in North Carolina as part of the program’s second cohort in 2010, Woelk specializes in the German language, culture and Yiddish in postwar writing — an interest she developed during her several trips to the German capital.

Woelk first experienced Berlin while working in a biology lab as a junior at Vassar, but after graduating in 2008, she returned to Germany where she spent a year studying disability policy in East Germany.

It was her yearlong trip that solidified her decision to enter academia to study the country’s culture.

“It’s a really young and vibrant city, but it’s also a city whose history is very visible,” she said. “It’s had a very tumultuous history in the 20th Century. … It’s very conscious of its history and I think it’s fascinating.”

After returning to the United States, Woelk spent the next year as a teacher at an English?Spanish preschool before she turned her focus back to her own education and began her doctoral work in German Studies at Carolina and Duke.

Studying at both schools, Woelk was able to work with a variety of faculty members and experience teaching at a private and public university. During the school year, she taught classes at Carolina, and during the summer organized and led Duke’s study abroad.

Woelk, who holds a Chancellor’s Fellowship within the Graduate School’s Royster Society of Fellows, has focused on the Yiddish language and its use in Cold War-era literature during her time in the program.

“Emma is an extraordinary student both as a person and a scholar,” Downing said. “She has an incredibly lively intellect and warm personality who is just a marvel to have around. She’s contributed so much to our intellectual community.”

After graduating, Woelk will return to her hometown of Austin, Texas, where she will teach language and culture as the only German professor at Saint Edward’s University.

“It feels really good,” Woelk said. “I’ve been a student for a long time and have loved being a student. I’m excited to get to stay at a university now that I’m done.”