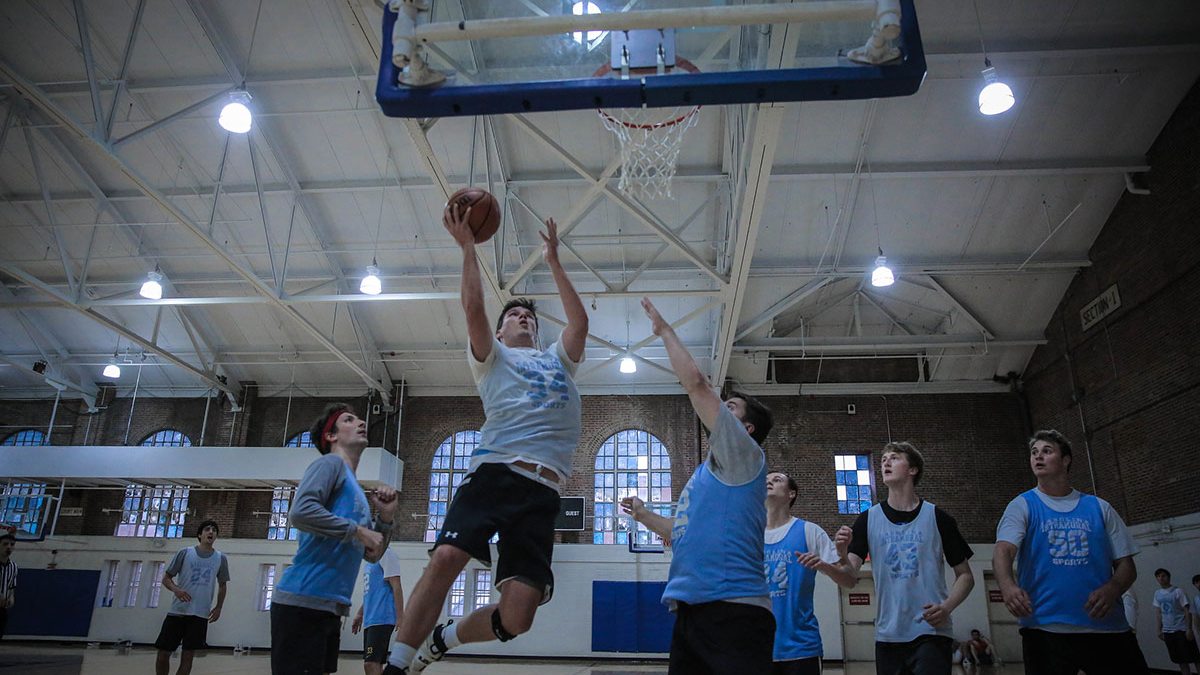 After years of playing sports and practicing every day after school, Kyle Wolfe knew he needed to find a new way to keep competing when he arrived at Carolina in 2013.

“Coming out of high school, a lot of people are used to having practices all the time and playing sports, and then you get to college and it’s like ‘Well, now what do I do?'” he said.

To get that competitive fix, Wolfe joined the more than 6,000 students, faculty and staff who are part of Campus Recreation’s intramural sports program.

“As soon as I got to campus, I wanted to find people to play flag football with. We were playing flag football and soccer in the first week,” said Wolfe, who is still competing on the intramural fields as a doctorate of physical therapy student.

With competitions ranging from flag football and volleyball to wallyball and cornhole, the intramural sports program provides structured leagues for the entire Carolina community. Each semester, the program hosts more than a dozen co-ed leagues and tournaments.

“The main goal for us is to create a place for people to build community and a safe place for them to workout with some structure,” said Tori Hooker, Campus Recreation’s senior assistant director of sports programs. “It’s just a fun atmosphere and a place for them to play and build relationships outside the classroom.”

For senior Anders Pokela, the program has allowed him to stay active in the sports he grew up loving.

“The opportunity to continue a sport like soccer in a fun, relaxed setting with friends who may not have ever played before is really fun for me,” he said. “To play sports with my new group of best friends that I’ve made at Carolina is really valuable.”

Intramural sports have also been a consistent stress reliever for both Wolfe and Pokela. While balancing classwork, jobs and their social lives, the organized games force them to take a break.

“When you get stressed out, you can convince yourself that you don’t have time to do something other than school. But when you have it on the schedule, it’s easier to plan around it,” Wolfe said. “It’s a ton of fun. It’s a good way to get my competitive energy out in a healthy way.”

Hooker said the players range from former high school varsity athletes — and occasionally former NCAA athletes — to novices. The leagues are designed to create a welcoming environment for all athletes.

Some sports, however, turn all participants into rookies. While the standard sports are the hallmark, the program also features several more unique competitions like sit-down volleyball and goalball.

Of the several high-coveted Intramural Champions T-shirts that Poleka has, two are for an adaptive sport called goalball. A modified Paralympic sport, players wear blindfolds and try to block a ball that beeps from entering their goal.

“The opportunities through Campus Rec to do all these new sports are awesome,” he said. “It’s one of the great opportunities of going to a big school like Carolina. The opportunity to jump into a sport you’re unfamiliar with but still have the freedom to be you and not feel forced by an overly competitive game is unparalleled.”

Those experiences, he said, are some of his most memorable ones from Carolina.

“I’ve always loved sports, and being able to on a Tuesday night at 10:00 leave the library and head down to Hooker Fields to play a game of soccer — it’s really cool,” Poleka said. “It’s added a lot my college experience and I’ll absolutely remember it.”