At Carolina, the future is CURRENT. 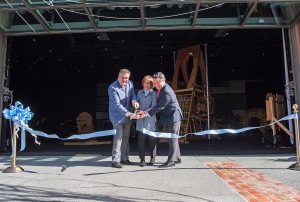 The nearly 7,000 square-foot space located in the new Carolina Square on Franklin Street aims to foster a connection between the campus and community through art.

“This space, this venue, this activity is one of a kind,” Kang said. “…This is a place where we will build community through the arts.”

Operated by Carolina Performing Arts, CURRENT is Carolina’s latest step in fulfilling a key initiative of the Blueprint for Next strategic framework of bringing the arts to the communities on and surrounding campus. In 2016, Folt launched the Arts Everywhere initiative because she believed the arts are an essential tool for learning and engaging communities. 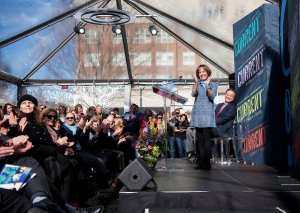 “The Arts Everywhere initiative is at the core of our plan for igniting creativity in every person and every place,” Folt said. “And this beautiful home is a front porch to the University and to the town that really lives that Arts Everywhere experience.”

A flexible and immersive setting, CURRENT ArtSpace + Studio is designed to break down barriers by pushing the performance past the stage and into the audience.

Divided into two areas, CURRENT’s art space is the main performance space designed to engage audiences with intimate and immersive artistic experiences, and the studio is the multipurpose rehearsal, event and performance space with windows on three sides.

The University, Kang said, has long needed a space for work that fell outside the traditional theater or concert hall format. And CURRENT is just that.

“It will be a home for our faculty, students, artists in residence and the entire community to gather through creative expression,” Kang said.

“It invites people of all ages and abilities,” Kang said. “It rewards the curious and releases the creativity in all of us.”

Tickets for “Sound Maze” and other performances and installations at CURRENT can be purchased at www.carolinaperformingarts.org.