Fashion communicates a great deal through patterns, colors and textures. Those material choices may seem minute on the surface, but in reality, they convey a lot about a person’s identity — both personally and socially.

Embracing the link between fashion and self-expression, two Carolina students are using fashion to tell a new story about mental health in the South Asian community and quash stigmas still surrounding mental illness.

Hrishika Muthukrishnan and Pareen Bhagat recently partnered to design a fashion show that they said traced the progression of mental health perceptions within the South Asian community and shared the mental health journey many South Asian immigrants experience as they transition to life in the U.S.

The Carolina chapter of WE ARE SAATH, a student organization dedicated to promoting mental health resources for the South Asian community, hosted the show April 19. Nine Carolina students walked an outdoor runway wearing original designs by Bhagat, with even more Tar Heels capturing the evening’s outfits in photos and videos for an online premiere.

Muthukrishnan, who founded the UNC-Chapel Hill chapter of WE ARE SAATH, said the themes showcased in the fashion show are critical discussions to have. 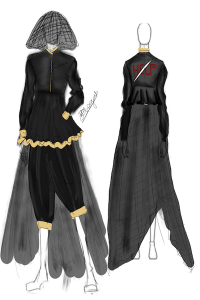 WE ARE SAATH fashion show design. Sketch by Pareen Bhagat.

According to Muthukrishnan, some South Asian college students tend to push aside their mental health because conditions like anxiety or depression aren’t taken as seriously in their culture. “I think it’s important to address that side of mental health,” said Muthukrishnan, who is majoring in neuroscience. “I want them to see how mental health doesn’t just mean serious psychiatric disorders, though that is a large part of it.”

Bhagat’s designs began with all-black, traditional South Asian clothing that she said symbolizes how mental health has traditionally been perceived within the region. “The outfits show this idea of having this cloak over you and not being able to see things properly,” the media and journalism major explained. But as the collection progresses, that heavy color gives way to purple and orange — WE ARE SAATH’s colors — as the stigmas around mental health drop away.

Bhagat said they wanted to show the idea of letting go of those traditional ideas and accepting these more modern ways.

“We thought it would be a really nice way to show the transition through clothing,” she said. 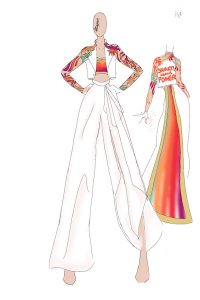 WE ARE SAATH fashion show design. Sketch by Pareen Bhagat.

Part of the persistent stigma around mental health in the South Asian community comes from the importance family and honor hold. “That comes up a lot with South Asians,” Bhagat explained, “this idea that you can’t tarnish your family name, like ‘Why would you ever get help? What will people say?’” Bhagat took those words — family and honor — and added them to the early designs, stitching them onto the jackets’ backs.

The point of the show, Bhagat emphasizes, is not about giving up one’s traditions but becoming more aware of problematic notions of mental health. Even though the designs move in a western direction, they don’t wholly abandon South Asian traditions — a purposeful design choice. “You’re not letting go of your culture or tradition, but you are letting go of the stigma that is associated with it,” Bhagat said.

“A large aspect of the fashion show is to normalize the conversation around mental health,” Muthukrishnan added. “Our idea is to address sensitive topics but in a very gentle way.”