Dedren Snead ’12 is many things. He’s an international businessman, a tech whiz, an artist and an entrepreneur. He has lived and worked in places like Japan, China and Korea. He has a knack for learning both foreign and computer languages quickly, and he is always coming up with big, bold ideas.

It may seem unlikely that such a worldly person was born and raised in the tiny town of Snow Hill, North Carolina. Perhaps even more unlikely for Snead as a young person was the idea of attending North Carolina’s flagship university.

“I grew up on a small tobacco farm in eastern North Carolina where just graduating from high school was a big deal,” he says. “You either got a job at a factory or on someone’s farm. UNC might as well have been on the moon.”

Snead describes his young self as the “consummate nerd.” Video games, Dungeons and Dragons, comic books and anime defined his childhood.

After school each day, Snead walked two miles to the public library where he read books about computers – and used them.

“The library had accessible computer games, and we didn’t have a computer in our home,” he says. “I would stay there every afternoon until it closed.”

On the weekends, Snead made the 30-minute trip from Snow Hill to Goldsboro to spend his free time and pocket change at an arcade. While he played games, he talked to the employees who maintained the machines.

“I realized early on that technology and stories provided a form of escapism,” Snead says. “It was a chance for me to imagine myself outside of my current circumstances.”

After graduating from high school, Snead moved to RTP and spent the next 10 years working as an IT consultant. Because it was the early days of the internet, he had enough self-taught skills to build tech and test platforms.

When the dot com burst came in the early 2000s, Snead suffered.

He enrolled at Wake Tech, which had just started a game design program. While he was working toward his associate degree, he learned about C-STEP, a program that enables students at community colleges to transfer to Carolina.

“I asked myself, ‘What’s a thing that I could never lose?'” he says. “The answer was a degree from Chapel Hill. If I could get that, then no one could ever take it away from me.” 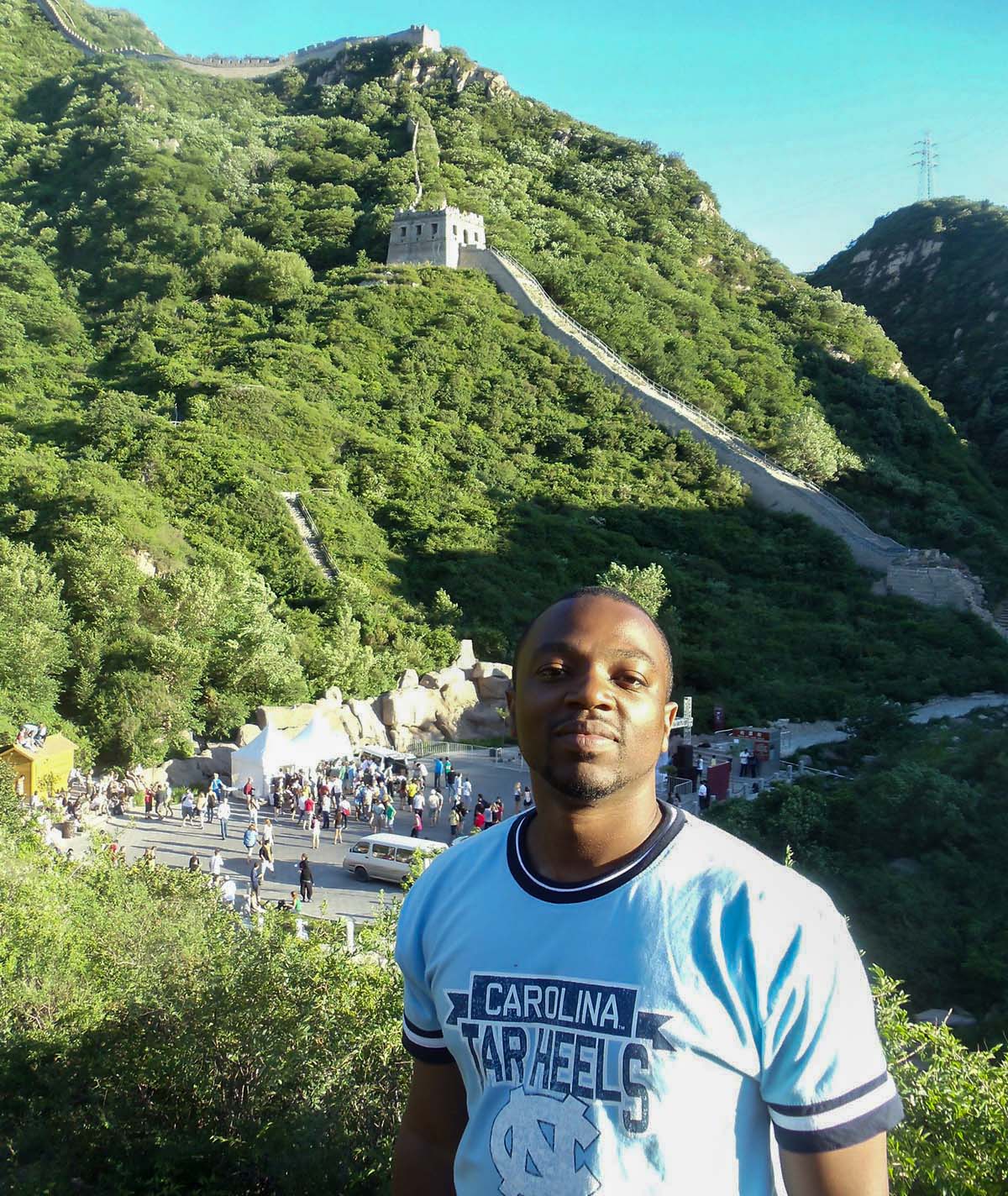 Dedren Snead at the Great Wall of China during his study abroad in 2011. (Photo courtesy Dedren Snead)

Once he transferred to Carolina in 2008, Snead decided to pursue a double major in global studies and Asian studies with a minor in entrepreneurship.

“I wanted to squeeze in as many programs as I possibly could,” he says.

Snead quickly realized he had a knack for learning foreign languages, and he found avenues to study abroad in both Japan and China.

“I didn’t know I was good at foreign languages because no one in Snow Hill spoke them,” Snead says. “It’s the same with computer languages – I can just pick that stuff up quickly.”

While Snead appreciates the many faculty members who helped guide his path at Carolina, he feels especially grateful to his first Japanese professor, Yuki Aratake.

“She changed my life for the better,” Snead says. “She encouraged me to not give up on my dreams.”

When he graduated in 2012, Snead was proud to have a degree from Carolina, but he faced a unique set of challenges.

“I wasn’t a 20-year-old kid that could just pick up and go anywhere to get an entry-level position,” he says. “I have a house and a family – I had to find something substantial.”

Fortunately, the international marketing department at Toyota offered Snead a manager-level position. After working for Toyota for five years, Snead returned to his lifelong passion for games and equity in technology. Now based in Atlanta, he runs a gamified learning platform called SUBSUME.

Snead considers SUBSUME to be more than just a platform. 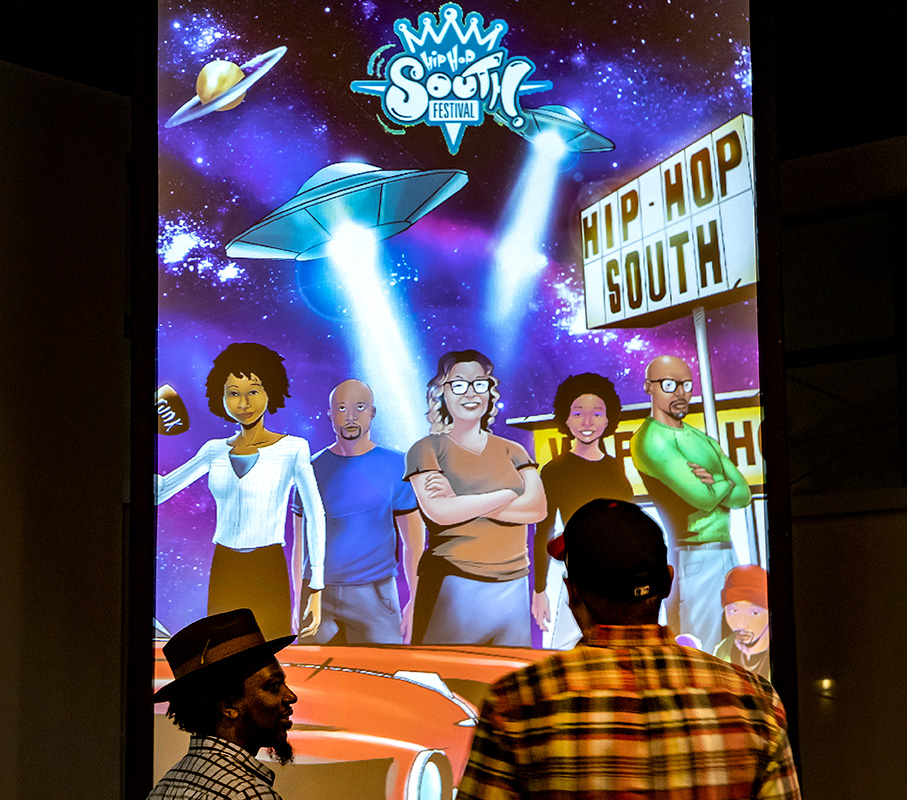 Snead (left) stands in front of his art piece while talking with Chris Massenburg, the Rothwell Mellon program director for Creative Futures at Carolina Performing Arts, during the Hip Hop South Festival in April. (Photo by Johnny Andrews/UNC-Chapel Hill)

“It’s basically all of my endeavors and ambitions put together is this one creative space,” he says.

In the fall of 2021, Snead became an inaugural Innovator-In-Residence at the College of Arts & Sciences UNC Shuford Program in Entrepreneurship. He is one of seven Carolina alumni who are supporting students through academic lectures, professional development initiatives and mentoring opportunities. Each innovator comes to campus for one week per academic year, and Snead completed his week in February. Returning to Carolina served as a pertinent reminder of the pride Snead holds in his degree.

“Being back on campus reminded me that UNC is at the forefront of innovation in every facet—and the students represent that,” he says. “They are engaged and open about who they are and the world they want to be a part of.”

When Snead talks with students today, he emphasizes the fact that not all career paths follow a linear trajectory, that it’s OK to be unconventional, and that a Carolina education can take them anywhere.

“Getting my degree from UNC was life-changing,” Snead says. “Even 10 years after graduating, being part of the Carolina family is still paying dividends and empowering me to go forward.”