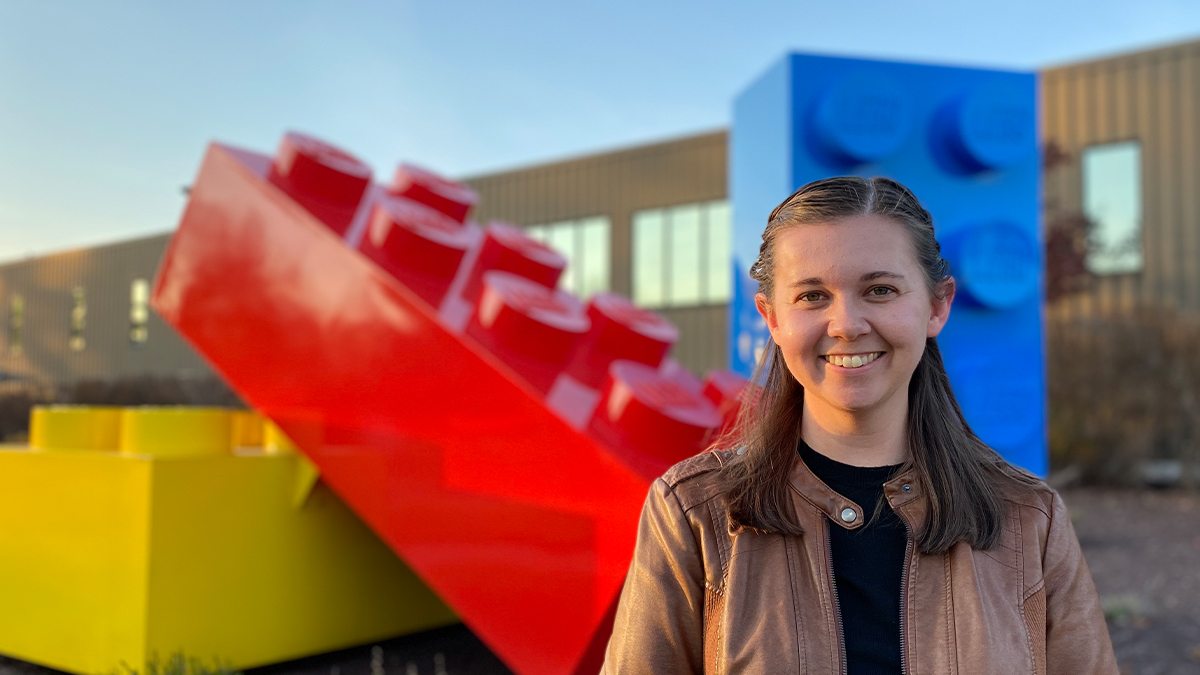 With a toy collector for a dad and a mom who is an educator, Janie Sircey’s childhood never had a shortage of creative toys like LEGO.

“LEGO was a huge part of my upbringing,” said Sircey ’15. “Looking back, there’s not a moment in my childhood that doesn’t include LEGO bricks.”

Working for the company that bolstered and fostered her creativity as a kid later became a dream for her as she grew up. Brick-by-brick, Sircey built a career that led to that dream job at the LEGO Group, where she is a digital marketing manager.

The Tar Heel now works alongside the company’s entertainment partners like Disney and Marvel to create content — particularly for the LEGO YouTube channel — that engages the channel’s 13 million subscribers and the other hundreds of millions of LEGO fans around the world.

Sircey learned many of the skills she has needed throughout her career at Carolina and what is now the UNC Hussman School of Journalism and Media.

Initially arriving in Chapel Hill with plans of becoming a New York Times reporter, Sircey threw herself into her journalism and English courses at Carolina, where she was also a Morehead-Cain Scholar. But an advertising and public relations course during her second semester shifted the vision of her future career.

“I just loved the creativity of all of it,” said Sircey, a native of Swannanoa, North Carolina. “I didn’t realize that advertising was art until that class, and then I wanted to jump on it as fast as I could.”

She joined the National Student Advertising Competition, a national competition and class at Hussman that pairs Tar Heels with real clients. As part of the competition, Sircey helped create and pitch advertising campaigns to Mary Kay as a junior and Pizza Hut as a senior.

“I’ve always loved brainstorming,” she said. “The reason I fell in love with advertising was the creativity of it. Being part of that, being in those sessions where we were going back and forth on ideas and getting excited about the ideas, even though it was for a class, I think those moments solidified that this is what I wanted to do.”

With real-world experience under her belt, Sircey’s first professional stop after graduating in 2015 was at Belk in Charlotte, where she served as a copywriter for the department store’s website. Writing 50 to 100 blocks of text a day, she tapped into the skills she honed during journalism and English courses.

When an opportunity arose to move into advertising in the entertainment industry as a social marketing coordinator for AMC, Sircey jumped at it and became the social media voice for some of the most popular television shows.

A jump to social media

“That was a great job because it was in the entertainment industry, which is something I really wanted to get into when I was in college,” she said. “It was a fun job. I got to go to South by Southwest and New York Comic Con and do all the live posting for social media channels.”

Not only was it the step in the right direction for the Tar Heel professionally, but it was also a TV fan’s dream as she operated behind the scenes to promote The Walking Dead, Breaking Bad and Mad Men and worked directly with cast members.

“It was a lot of work to take on at once — a lot of late hours and long nights — but it was exactly what I wanted it to be,” she said. “My job was to watch all the television shows at work before they aired and make sure our copy and assets matched what was going on because fans of television shows are intense, and they will call you out at every opportunity.”

A year later, Sircey took a new job leading the Clio Awards’ social media efforts, first as a manager and then associate director. Sircey served as the sole social media staff member as the advertising and design award program worked to expand its social media presence.

“Before I came on, they didn’t have a big presence,” she said. “That was a cool position to be in because I got to start from scratch. I was a team of one.”

Belk, AMC and the Clio Awards were the building blocks toward the ultimate goal, and this summer, Sircey secured her dream job at the LEGO Group.

“My two dream jobs have always been LEGO and Disney,” she said. “When I got this role, it was like, ‘This is it. I’m going to be at LEGO for the rest of my career.’… Coming into this role, the onboarding process has been smooth and amazing because I already knew the brand. I know the history. I know what a 4×4 LEGO plate is versus a 1×1.”

Sircey said she’s always worked to inject creativity into all the positions she’s been in. That task comes a bit more naturally in her role.

As digital marketing manager for the Americas region, which spans the United States, Canada and Latin America, Sircey is hands-on with social media promotion and content production, including the recent Halloween special for LEGO Star Wars. Working alongside LEGO partners and animators, she’s bringing creative ideas to life.

“The projects I’m getting to work on are dream projects with dream partners — things that I always wanted to work on,” she said. “Getting to that point right now in my career at 28, getting my dream job, it’s pretty incredible, and I’m so grateful.”