Tyler Coffee knew he faced a significant challenge when he received his acceptance letter to Carolina. Like all incoming first-year students, he knew the next step — transitioning to life at college — wouldn’t necessarily be an easy one.

Mixed in with the excitement of moving into the residence halls and beginning a new chapter are the daunting tasks of making new friends, adjusting to the academic rigor and simply learning the way around campus.

Those brewing challenges weren’t lost on Coffee, and he wanted to make some headway before the start of the fall semester.

“I wanted to immerse myself in the college atmosphere as quickly as possible,” he said.

To do that, Coffee arrived in Chapel Hill in June with more than 50 other incoming Tar Heels to kick off their Carolina experience early through Summer Bridge. The six-week transition program prepares students for UNC-Chapel Hill through community building, experiential learning and coursework.

Hosted by the College of Arts and Sciences’ Center for Student Success — directed by Associate Dean Marcus Collins —and with support from donors, Summer Bridge provides stipends for the students and covers housing and tuition for six credit hours. The program is open to all admitted incoming first-year students from North Carolina and serves as a way to ease the Tar Heels into their new surroundings ahead of the bustle of the academic year.

“We want them to find confidence in knowing that they belong here, that their admissions decisions were not a mistake or a fluke,” said Victoria Chavis, program coordinator for Summer Bridge. “Just because it’s sometimes challenging to succeed here academically doesn’t mean you don’t belong here.”

Summer Bridge doesn’t waste time in achieving its goals. Within just a few days of moving into their residence hall, the students attend their first college classes. All participants are enrolled in an English class and have the choice of one of three prerequisite classes in math, chemistry or education.

“I feel like it’s just rigorous and challenging enough to keep them engaged and busy, but not so much that it’s overwhelming and they can’t enjoy their summer, too,” Chavis said.

Summer Bridge provides tutoring and study sessions outside of the classroom to help the Tar Heels navigate college-level courses. Dalton Locklear, a Carolina junior and a tutor of the Science of Learning class, said the program helps establish good study habits.

“We explore how students can learn and find strategies they can incorporate into their Carolina experience to make it a better transition,” said Locklear, who attended Summer Bridge as a first-year student. “There’s going to be struggles and bumps in the road, but Bridge really helps students transition from high school to college. Whether they’re taking the chemistry course, education course, the math course, it’s all about the transition.”

Outside of the courses and tutoring, the program is also designed to introduce students to resources, such as academic advising, and show them new opportunities by touring various schools and departments.

“We have little sessions each and every day with a different department, and they’ll tell us about their program, what’s going on, what they do in that building and the different resources that they have,” Coffee said. “It’s given us a way to get acclimated.”

For Amy Duque, an incoming first-generation college student from Henderson, North Carolina, those sessions piqued her interest in a new major she didn’t know about — human development and family studies at the UNC School of Education.

“I’ve never really explored this,” she said. “We had a session with that one, and it opened me more to the major and made me want to do it.” 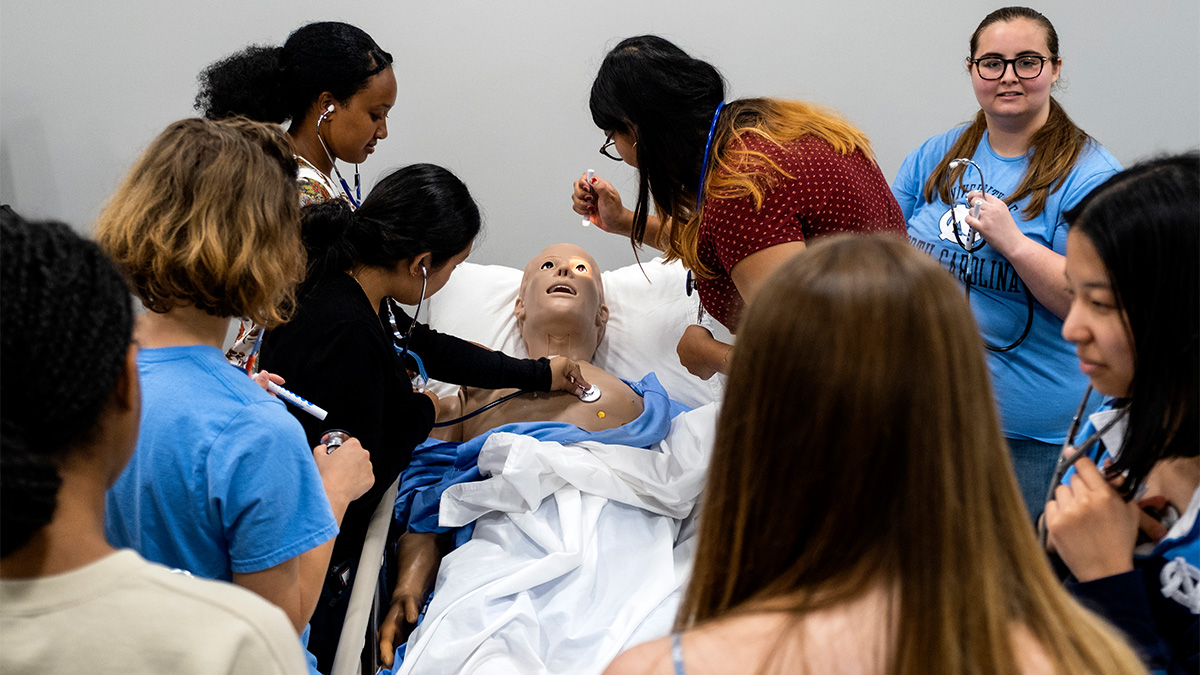 But academics are just one part of the transition to college. Summer Bridge also helps students make connections and establish a social network.

“The network they establish with faculty and staff and then their friends are supports that will sustain them through graduation here,” Chavis said. “I’m still friends with my Bridgees. I did Summer Bridge 12 years ago.”

The program helps spur those connections through social activities ranging from team building at Campus Recreation’s Outdoor Rec Center to a talent show.

Locklear said that Summer Bridge becomes a family that carries on beyond the six-week program. Through his friends from the program, the Tar Heel became connected with more groups on campus, including his fraternity and the Carolina Indian Circle.

“If I didn’t have Summer Bridge, I wouldn’t have had a family here. It would have been a community, but not family,” he reflected.

The program is led by current Tar Heels — many who attended Summer Bridge themselves — who are also eager to serve as mentors and support systems for the new students.

“A lot of the counselors when I was there, they were really big for me that first year. I wanted to be one of those people for somebody else,” said Jordan Roberts, a senior who returned to the program as a counselor. “It can be difficult to find that community on campus. If you can come in with just one person that has your back, having that is big. I really want that for them.”

And that community is already forming for the newest Tar Heels.

“We’re all getting to know each other. We’re all taking courses together, and we’re all helping each other out at the same time,” Duque said. “You have your little community. You know people once you get in for the fall, so you’re not lonely because you know people know.”

With just a few weeks until Coffee moves into his new residence hall, he’s more comfortable with what’s coming and excited to begin his Carolina experience officially. He credits Summer Bridge as a big reason why.