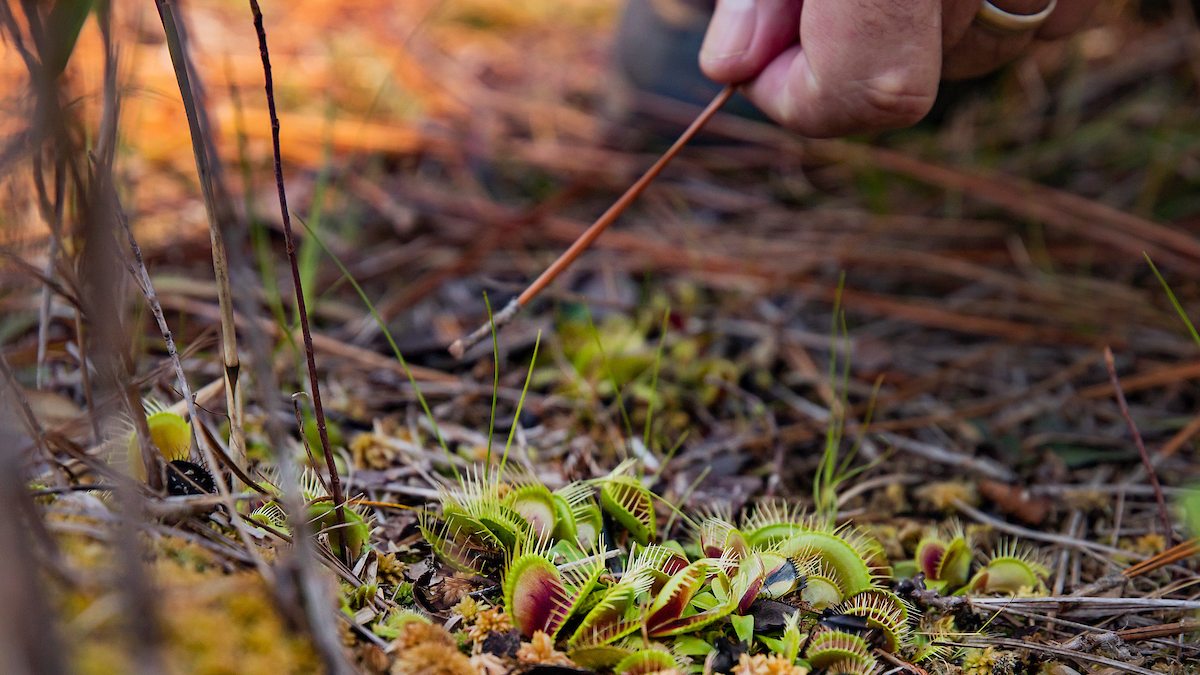 In the brush of North Carolina’s humid swamplands, a predator lies in wait. It’s perfectly still. It doesn’t breathe. It hasn’t had a meal in almost a month, but patience goes a long way out here.

Suddenly — its chance! A beetle, drawn to the hunter’s scent, comes to investigate. It casually alights on the open maw, and in its meandering, the beetle trips one hair-like sensor, and then another. The hunter pounces.

In a tenth of a second, the Venus flytrap springs to life and its leafy jaw snaps shut, ensnaring the beetle in a prison of spiky hairs. It’s a grisly end for the insect. Over the next few days, digestive enzymes will turn it into an absorbable goo. But for the plant, it’s an opportunity to live a little longer in a habitat nearly barren of nutrients.

The Venus flytrap, and carnivorous plants like them, are oddities of the plant world. Carl Linnaeus, a famous 18th-century botanist who developed the modern method of assigning species scientific names, dubbed flytraps “against the order of nature as willed by God.” But Charles Darwin found delight in these strange creatures, calling them “one of the most wonderful plants in the world.”

Whether monstrous or wonderful, flytraps have existed on North Carolina’s coastal plain for millions of years. But they’re facing an uncertain future — between poaching and habitat loss, the amount in the wild has significantly decreased since 1958.

“There’s a concept called ‘plant blindness’ that people have — blindness to the recognition of plants and their diversity,” Johnny Randall, the director of conservation programs at the North Carolina Botanical Garden, said. “All carnivorous plants are fascinating, but for Venus flytraps to be active traps that actually close to capture its prey — it’s just a marvel of evolutionary biology.”

Randall is an expert on flytraps and other rare plants in the Carolinas. He and others at the botanical garden — and across Carolina — are working to preserve these species and their genetic diversity both in the lab and in the field.

As one of the most well-known plant species in the world, wild flytraps are the victims of widespread poaching. In one afternoon, a poacher can dig up hundreds of individual plants to sell to online companies or nurseries. It’s a felony in North Carolina to take them from public land and from private property without written permission, but local law enforcement rarely has the resources to pursue poachers aggressively. Considering that there are only about 400,000 in the wild, poaching losses quickly add up.

Flytraps are picky about where they root, too, and the development of the sunny, wet pine savannas where they grow is also taking its toll. They are found nowhere else in the wild except for a 90-mile inland radius around Wilmington, where the soil is high in water content but low in nutrients — so meager, in fact, that flytraps and other carnivorous plants in the area evolved to eat insects. That habitat loss is further spurred by fire suppression. Unless their habitat is burned or mowed every few years, the flytraps are shaded out by larger plants.

“These wet pine savannas are some of the most biologically diverse sites on Earth,” Randall said. “There’s always been an issue of ruining flytraps’ habitat from draining for agriculture and overall development.”

In an ongoing project, the Botanical Garden is working with the Carolina Center for Genomic Sciences to conduct the first-ever evaluation of genetic diversity of wild flytraps. By mapping the spread and variety of genetic traits, or genotypes, across the state, Carolina can determine which populations should be targeted for conservation efforts. They can also find out whether genetic variation is declining alongside overall numbers.

“If there are unique genotypes in some regions, especially if they are on unprotected land that’s not being properly managed, more emphasis can be placed on conserving those populations,” Randall said.

As the official state carnivorous plant — a seemingly obvious choice, but North Carolina has 34 species of animal-eating plants — flytraps are a symbol of weirdness in the plant world. Considering alternative methods to traditional restoration efforts could be a saving grace in an uncertain future.

Flytraps, like most organisms in nature, are found in what are known as populations. Each population is a little bit different, and the genetic makeup of these populations sometimes varies due to differences between habitats.

Just as buying multiple lottery tickets increases someone’s chance of winning, genetic diversity increases the odds of a species surviving changes to its environment. If some flytraps have the right traits for heat resistance and others for frost resistance, then the plants are likely to survive a major climatic change in either direction. The same goes for disease resistance or proclivity to different amounts of rainfall. Natural selection favors those that adapt.

As of the spring 2019, 100 populations exist on the North Carolina coastal plain, according to Stephanie Horton of the North Carolina Natural Heritage Program. Twenty-one populations touted more than 2,000 individuals, but 51 contained fewer than 500. In addition, in 31 places where flytraps were known to have once grown, researchers found no trace of them.

“It’s really been declining over time, mostly because of environmental problems,” Randall said.

By understanding where genetically diverse populations are located in the state, conservationists can zero in on what areas need their help. That work begins in the lab, where Corbin Jones, a population geneticist in the College of Arts & Sciences biology department, has identified four genetically distinct groups in North Carolina.

“So this population up here is clearly genetically very distinct,” Jones said as he traces the base of his pen over a digital map of eastern North Carolina. A large red circle surrounds the Sandhills.

He moves his pen until it hovers over two other circles, almost touching at the point where Wilmington is marked on the map. “What we thought was surprising is that there’s kind of a hard break between these two groups.” He taps at the thin space between the circles. “That’s the Cape Fear River. That’s probably what’s defining the difference between them.”

For the past two years, Jones has been working with Randall and another Carolina genetic biologist, Gregory Copenhaver, to parse out the secrets hidden in the flytraps’ DNA. The Jones Lab, in particular, has spent time finding genetic differences between the rare carnivorous plants.

A new part of that project involves mapping the plant’s entire genome — something that has never been done before.

“There’s been a technological revolution that is allowing us to do a decent genome cheaply,” Jones said. By mapping the entire genome, they can more accurately assess the differences and similarities in DNA with less guesswork.

Using state-of-the-art technology, conservationists have a better picture of what they’re working with and what the species looks like at a genetic level. Jones thinks that within the four genetically unique groups, they may find lots of variation — which makes archiving these plants just as vital as discovering them.

Luckily, the botanical garden is already on it.