Emmaus Holder has always considered himself an adventurous person. He has been on numerous hiking and backpacking trips, and he’s traveled around the world, including to Tanzania and Djibouti just this spring.

This summer, the Carolina sophomore took his adventurous nature to another level.

“I like to explore a lot,” he says. “I’ve done a lot of backpacking, hiking and camping. I really wanted to go on a long bike tour. I was thinking about a tour across Europe, but with the COVID restrictions, it was cut down. So, I thought, ‘Why not ride across the country?’”

Over the span of 56 days this summer, he did just that, cycling 4,300 miles from Topsail Beach, North Carolina, to Los Angeles in a solo, self-supported ride.

The experience was more than just about racking up miles on his bike, though. Holder tied his academic and personal passions into the adventure, turning it into a research opportunity and a chance to bring awareness to Fetal Alcohol Spectrum Disorder, which can cause physical and learning problems.

Unlike most cross-country trips, which are routed through tourist destinations, the points of Holders’ meandering route of the United States linked researchers working on Fetal Alcohol Spectrum Disorder, support groups and the services designed to help families. Riding from town to town, Holder stopped to meet with his various contacts to learn more about their challenges and successes, compiling dozens of interviews that the sociology student will turn into a research paper.

“I want to put together a list of criticisms for the systems and institutions tasked with helping take care of these kids,” says Holder, a Morehead-Cain Scholar. “It really takes a village, and there are services that are necessary and deserved. They need to be done differently than how they’re being done now.”

Holder knows well the challenges faced by people living with Fetal Alcohol Spectrum Disorder and those who care for them. Four years ago, his family adopted two siblings with Fetal Alcohol Syndrome — a condition that falls under the spectrum disorder. 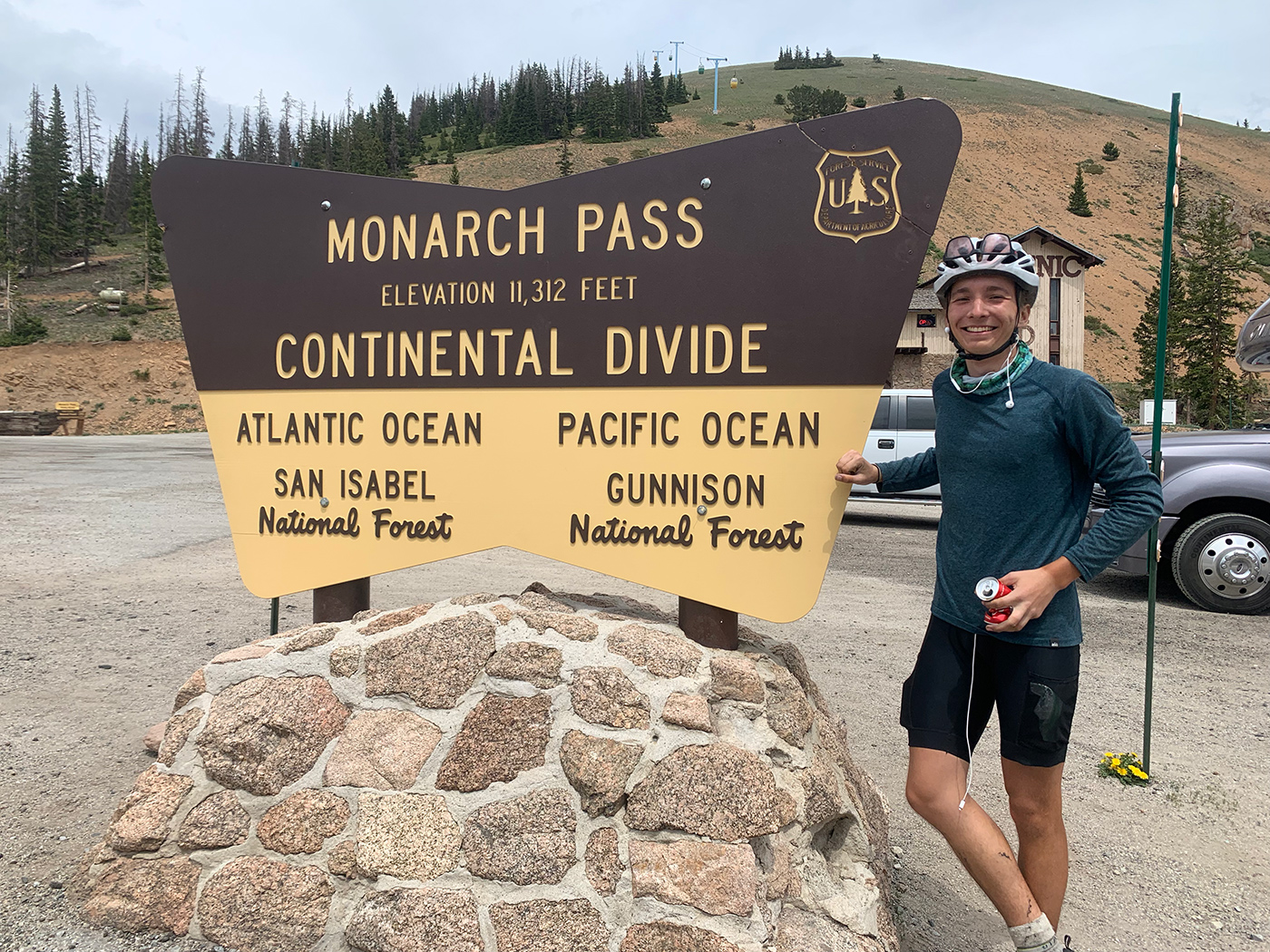 Holder stands at the Continental Divide in Colorado.

“I thought interviewing people who are going through similar experiences, and that need a voice would be a very meaningful purpose for this trip,” he says. “It’s a very journalistic story, just having these people’s voices heard so that people understand the challenges that come with Fetal Alcohol Spectrum Disorder and how many difficulties there are.”

With a map drawn to connect all the groups that he planned to interview, Holder hit the road on May 20 with everything — clothes, food and tent — on his bike. Day 1 of his ride was 135 miles — almost twice as far as he had ever ridden before.

After winding through North Carolina, with a stop at home in Pittsboro and then Asheville, Holder began zigzagging toward and through the Midwest before meeting up with his grandfather in Colorado. They rode together for two days before the younger Holder continued West through Utah, Nevada and into California during the hottest summer on record. 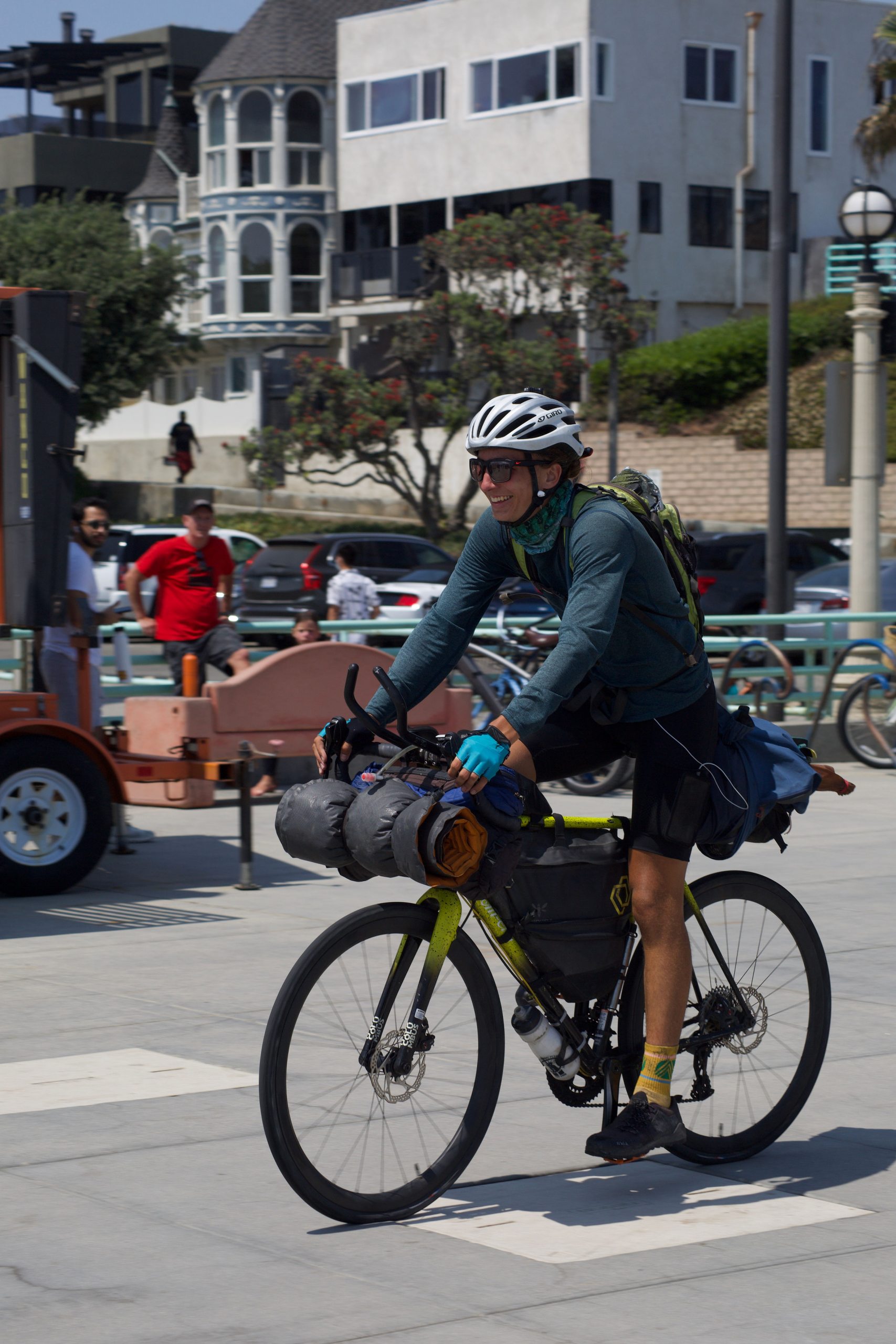 He averaged 92 miles a day, listening to audiobooks and making phone calls to pass the time. He’d sleep in a tent at night or a hotel when it was too hot.

Though Holder enjoyed the solitude and chance to think, being alone for so long was draining. But support from friends and family and the larger mission of raising awareness of Fetal Alcohol Spectrum Disorder kept him on the bike.

“It made it easy for me to stay positive and just enjoy every moment of the trip because it was pretty amazing,” he says. “Having a really clear purpose for what the trip was for made it easy to keep going every day. I knew I was making a difference in something that matters a lot to me. It was very motivating.”

On July 15, after 47 days of riding and nine rest days, Holder rolled into Manhattan Beach in southern California, where his father and brother were waiting to drive home with him.

Now back in North Carolina, transcribing his interviews and working on his research, Holder is already back on his bike. He knows no matter how much he rides, though, he’ll never have an experience like this summer again.

“This is something that is going to be one of the best things I will ever do in my life. I plan on doing similar things, but I really don’t think anything will ever top it. It was such a unique experience,” he says. “It was absolutely the best way I could have spent my summer. It could very well be the best roughly two months that I’ll ever experience. This is something that is going to be very special for me for the rest of my life.”