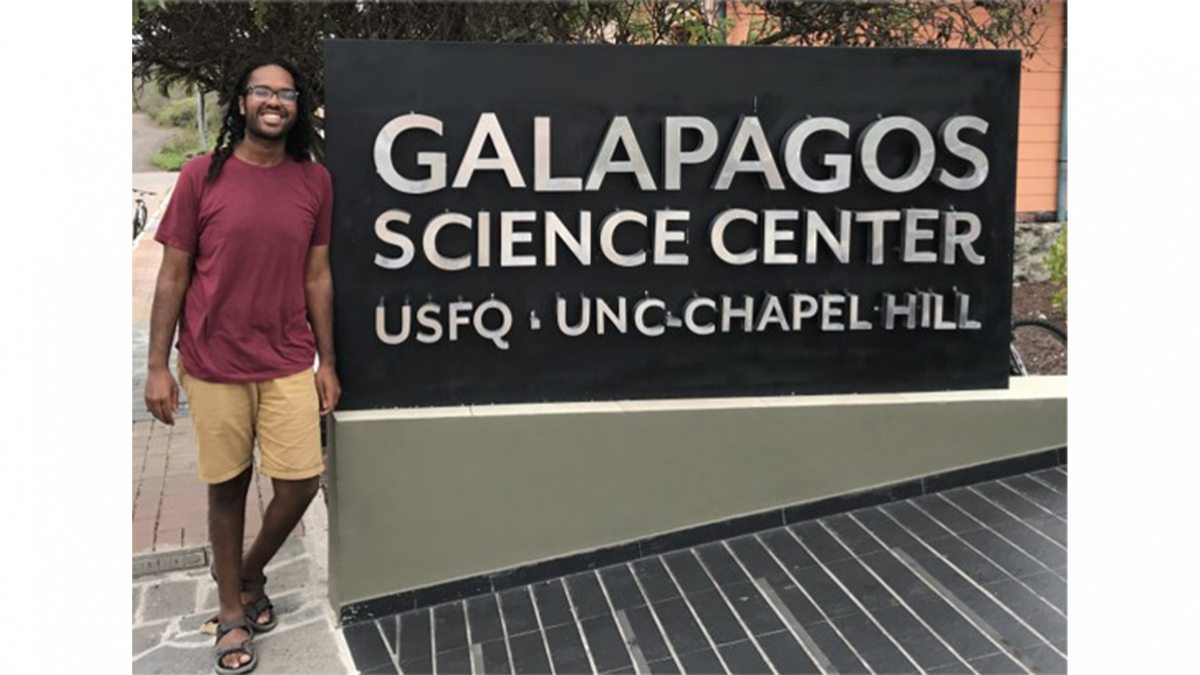 How do dollar stores replacing grocery stores in rural North Carolina impact the health of community members? Does the distribution of food outlets within a city disproportionately benefit certain neighborhoods while excluding others?

These are the kinds of questions that capture the attention of Khristopher Nicholas, a fourth-year graduate student in the UNC Gillings School of Global Public Health’s nutrition department.

Nicholas studies food environments — the physical, cultural, economic and social factors that impact a community’s opportunity to access food — and how they shape people’s diets and health.

“Nutrition isn’t just simply looking in a petri dish and understanding how we metabolize choline,” says Nicholas. “We really have to interrogate and come to terms with so many different societal and practical aspects of how we live and how we engage in the world. Nutrition and food really get to the heart of it.”

Nicholas’ research has taken him all the way to the Galapagos Islands, one of the world’s most unique food environments. He hopes his findings there can help lead to public health advances both in the Galapagos and in other areas.

Nicholas has long been interested in tackling food system issues, but he hadn’t planned to pursue a career in food and nutrition research. He didn’t even take a global public health course until his final semester as an undergraduate student at Columbia University. After receiving a degree in sustainable development in 2015, he began working in renewable energy and gained experience in spatial mapping of agricultural change.

Through that experience, he developed the research skills that allow him to take on complex nutrition research.

“Food is just one of those beautiful things, where obviously there’s science behind it, but it’s so emotional, it’s so cultural that we really get to sit at the nexus of so many fields,” he says. “My interdisciplinary background is a strength here.”

To better understand the impact of food environments on health, Nicholas traveled to the Galapagos Islands during the summers of 2018 and 2019 after connecting with UNC Center for Galapagos Studies and learning about their work not only in conservation but in public health and nutrition. Because the islands are so far from mainland Ecuador and most of the arable land is designated conservation areas, most of the food is imported.

“That creates some really unique challenges from the food supply and nutrition standpoint,” he says. “The Galapagos is unique. It has so many unique challenges that make research there insightful. In Chapel Hill, there are food outlets and fast food restaurants, but also I can just order my food on Amazon. How do you capture that as a researcher? That’s not the case in the Galapagos. That’s a unique characteristic that makes food environment research in the Galapagos very insightful.”

Working alongside interdisciplinary researchers at the Galapagos Science Center — a facility jointly operated by Carolina and Universidad San Francisco de Quito in Ecuador — Nicholas has been exploring the factors that shape the islands’ food environments and the decisions people make about purchasing food.

He collected data at markets and health information from community members on San Cristobal Island. He then created an algorithm that sets community food environment scores associated with community members’ purchasing behaviors. Back in Chapel Hill, Nicholas is now comparing those scores to the health data among residents.

The findings, Nicholas hopes, could help the islands create a better food environment for its residents and potentially improve diets for better overall health.

“My hope is that my dissertation findings would be part of the conversation around designing public health interventions in the Galapagos, figuring out creative ways to get local farmers’ produce to market at a competitive price, compared to the cheaper imported goods, and also have people increase their dietary diversity, increase their consumption of fresh fruits and vegetables,” he says.

And while the Galapagos is a unique location, Nicholas says it isn’t so unique that his findings can’t be applied elsewhere. In fact, the research project and his dissertation could fill in significant gaps in the field.

The project and its possible impacts on communities around the world, Nicholas says, show the value of interdisciplinary work. It’s an asset he plans on bringing to the nutrition field as researchers continue examining social issues through the lens of food.

“I think there is a real need to consider interdisciplinarity in the field of nutrition and I feel pretty well situated for that,” he says. “I want to consider climate change and policy, but also systemic inequality and all the pieces that we often think are independent silos, but really all relate to nutrition in fundamental ways.”

Learn more about the UNC Center for Galapagos Studies