Rows of nondescript beige and green cabinets fill three floors of Coker Hall where hundreds of students pass by without knowing the purpose or contents of the cabinets.

If they were to look inside, they would find folders full of archival paper with dried flora adhered to the pages and small stickers in the corner. The largest collection of its kind in the Southeast, those pages are some of the 800,000 specimens of plants, fungi and algae curated by the UNC Herbarium.

Established by William Coker in 1904 and managed by the North Carolina Botanical Garden, the collection of dried and preserved plants contains samples dating back to the 1820s and includes extinct species, herbal remedies, monster-like algae and even flowers named after the staff’s family members.

“The mission of the North Carolina Botanical Garden is conservation of biodiversity,” said Alan Weakley, an adjunct associate professor in the biology department and the curator of the UNC Herbarium. “The more than 800,000 species in the Herbarium records how biodiversity is changing in North Carolina and what species are rare and in need of conservation.”

The future of flora

The method of preserving specimens has changed little since the 1500s when the first herbariums were created. The plants are pressed onto non-acidic archival paper and secured with thread, tags or glue. A small card is attached to the page that records the plant name, date of collection, location and a description.

The traditional method of identifying plants involved measuring the width of leaves or length of petals, noting hairs on the back of leaves or the size of root systems. Today, the UNC Herbarium staff look at the cellular level to discover a plant’s origins.

“As it turns out, the traditional techniques used for hundreds of years is the best way to preserve samples for DNA extraction,” Weakley said. “When plants reach a certain level of dryness, the cellular processes are stopped. Over the last 25 or 30 years, we’ve come to use DNA as a major tool for doing plant taxonomy, and we can look back at specimens that were collected hundreds of years ago and sequence the DNA.”

Carolina’s herbarium has also begun digitizing the collection with the addition of a barcode on each page that lists all the identifying information for the plant, ensuring that there are two identifying tags on each sample and a method of remotely searching the collection. 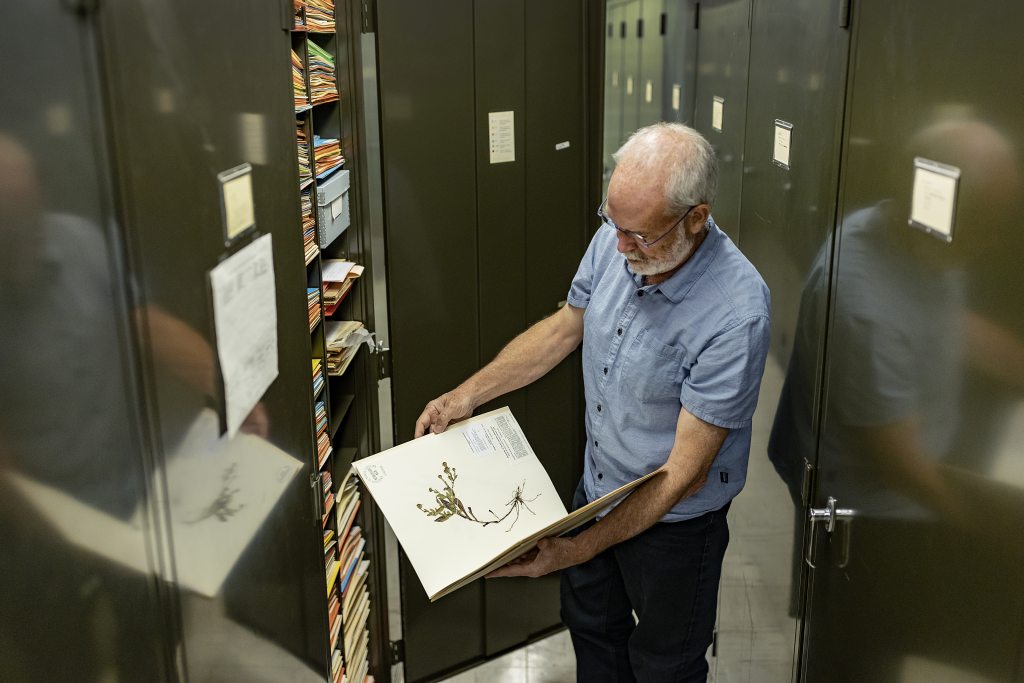 Weakley looks at one of the 800,000 species preserved in the file cabinets of the UNC Herbarium. (Johnny Andrews/UNC-Chapel Hill)

“We digitally scan all the specimens we collect so that they’re available to researchers or the general public,” said Weakley. “That’s part of bringing the herbarium into the 21st century and encouraging public interest in conservation.”

Weakley recalls using a several-hundred-page book to identify flora when out in the field for most of his career, but he and his fellow researchers are working to bring that process into the future, too.

The Flora of Virginia app developed by Weakley and collaborators in Virginia uses a graphic key to identify any plant found in the region by asking the user a series of questions. What region of the state are you in? Is the plant a tree? Does it have leaves or needles? Are the leaves alternate or opposite on the stem? Is the leaf shape lobed or toothed? After going through the key, users should arrive at a description and photo of a plant they can compare to the plant they are trying to identify.

“My concern for the biodiversity crisis is driving this modernization of the herbarium,” said Weakley. “We need to be conserving biodiversity for the environment’s sake and our own. We have an increasingly urban population who are less connected to nature, so digitizing the herbarium, DNA sequencing and developing apps makes conservation more accessible.”

The herbarium is also working toward the future of preservation and conservation by connecting with young botanists and encouraging their research. 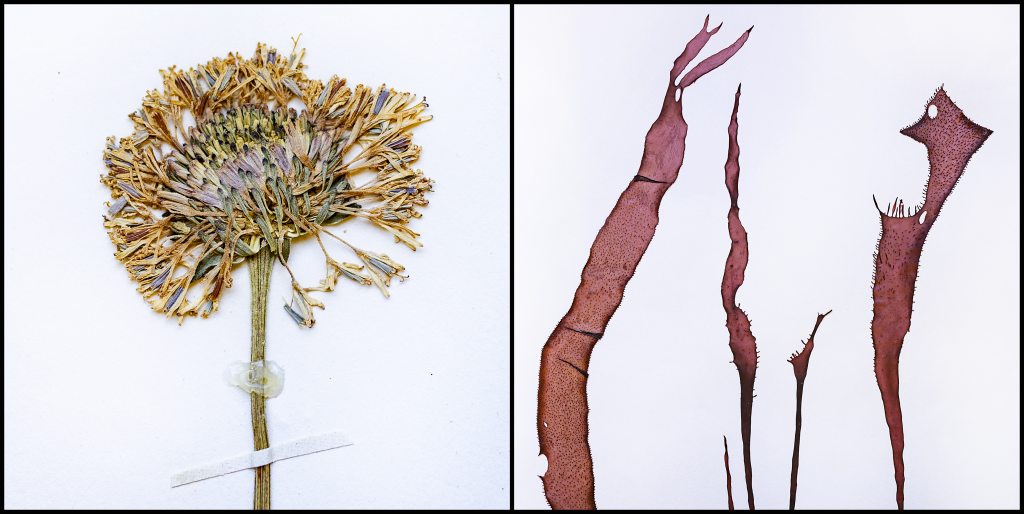 On the left: a preserved Marshallia legrandii attached to archival paper with non-acidic glue and a paper tag. On the right: Chondracanthus harveyanus, a type of red algae found off the coast of southern California. When the sample was collected Carol McCormick, the herbariums’ assistant curator, noticed the algae resembled a monster and dubbed it “Harvey,” the unofficial mascot of the herbarium. (Johnny Andrews/ UNC-Chapel Hill)

John Kees, a rising junior biology major, has been interacting with the herbarium staff since high school, often emailing them questions as he conducted a survey of his grandparents’ property in southern Mississippi.

“UNC is kind of the center for Southeastern botany,” Kees said. “Weakley’s ‘Flora of the Southern and Mid-Atlantic States’ is the key that everyone uses all across the Southeast because it’s the most up-to-date taxonomically, relatively easy to use and complete.”

Kees’ experience with the North Carolina Botanical Garden staff and their research, combined with the opportunity to work alongside them at the herbarium, was a key reason why he enrolled at Carolina.

“There’s just so many people here – graduate students and faculty — who are pretty influential in the field and who are doing all different kinds of things that I’m interested in and have all these skills that I’m trying to build,” Kees said.

The importance of conservation is illustrated in a more than 150-year-old pea flower in the UNC Herbarium’s collection.

Orbexilum stipulatum, or Falls-of-the-Ohio scurfpea, grew solely on a rocky outcrop on an island in the Ohio River and was last seen around 1850 when an industrial plant was constructed nearby. The construction and pollution obliterated the Falls-of-the-Ohio scurfpea’s only habitat and it disappeared from the wild. Now Orbexilum stipulatum exists only in Coker Hall and a handful of other herbariums across the country.

“The Southeast is kind of a refuge for plants because this region was never glaciated or below sea level,” Weakley said. “In the past 100 million years, many plants have evolved to thrive in particular habitats throughout the Southeast. We have species that only exist in five locations with maybe a thousand plants total, so they’re vulnerable to extinction.”

Other plants in the herbarium’s collection represent the historical importance and use of botanicals: Packera aurea, or ragwort, is a yellow-flowering plant that was used as a medicinal remedy in the 1800s to treat rheumatism. According to the collection tag written in 1930, soaking the roots in whiskey and drinking the mixture would provide pain relief. Weakley said many specimens preserved in the herbarium were the primary sources of medications in the 19th century and even today. 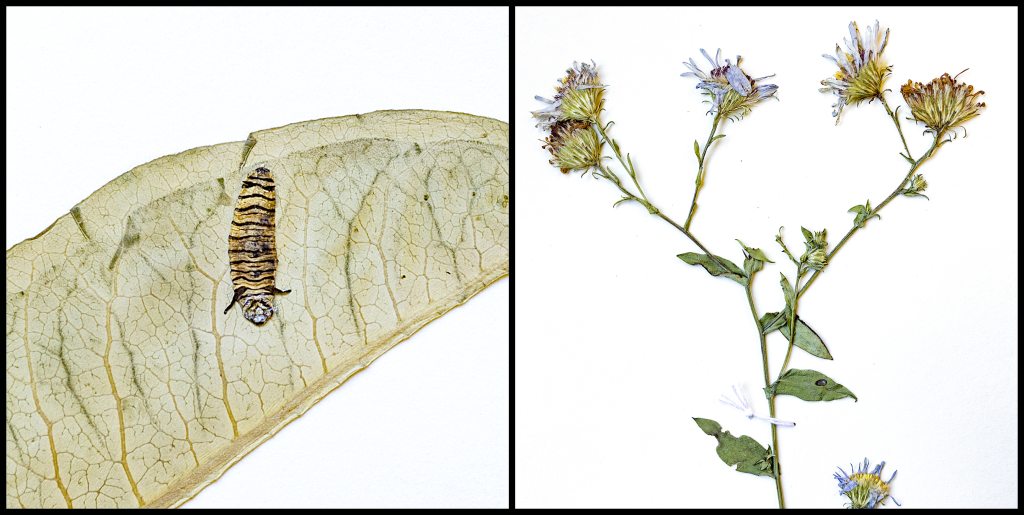 On the left: a Monarch butterfly caterpillar was accidentally preserved on the leaf of a specimen of Asclepias variegata. On the right: A preserved flower of Symphyotrichum rhiannon, the species Weakley identified and named after his daughter. (Johnny Andrews/UNC-Chapel Hill)

Weakley’s favorite species in the herbarium isn’t as rare or useful as the Orbexilum stipulatum or Packera aurea, but he did discover and name the species himself.Symphyotrichum rhiannon, a waist-high purple flower found in a limited area of western North Carolina, is named after Weakley’s daughter.

“We discovered the species around 18 years ago when she was a toddler, and she used to be embarrassed about having a flower named after her,” said Weakley. “Now, she’s an adult who thinks it’s cool and had the flower tattooed on her arm.”

Whether a plant is preserved through conservation, on paper, or even with a tattoo, Weakley has high hopes for the future of biodiversity, and the UNC Herbarium is playing a crucial role

“A rare species that grew on the same island in the Ohio River as the Orbexilum stipulatum was also thought to be extinct but was recently identified about 50 miles away growing in a similar habitat,” Weakley said. “A species is never a lost cause.”