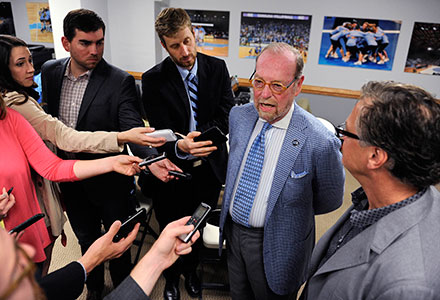 Alexander Julian was in a hotel room on a business trip in Europe in the late 1980s when the phone rang. On the other end of the line was a familiar voice from home asking for a favor.

It was time for the Tar Heels to try something new.

“To have Dean Smith call me in London and ask me to redesign the uniforms for the Tar Heels was like getting a direct line to God asking for new halos for the archangels,” Julian said during a recent interview.

Over the past two decades, Julian’s jersey design and iconic argyle have become synonymous with the University of North Carolina at Chapel Hill and the Tar Heels’ men’s basketball team. The linking diamonds that have been featured down the sides of Carolina’s jerseys and shorts since 1991-92 will soon be added to more Carolina athletic uniforms, thanks to a color and logo “refresh” that was announced by Nike and UNC’s athletics department this week.

“It’s an honor [that] this has become a symbol of Carolina’s greatness,” Julian said. “I’m absolutely thrilled. … This has been an organic process of the argyle evolving from Carolina basketball into a symbol for UNC sports.”

By the time Smith approached Julian with the idea of redesigning the basketball uniforms, the famous designer had already made his mark creating uniforms for professional sports with the debut of the Charlotte Hornets teal and purple jerseys in 1988 and racing suits for IndyCar driver Michael Andretti.

Born and raised in Chapel Hill, the new assignment was equally an honor and burden, Julian said.

“I think I’m the only person in college basketball that had to make it in the pros first,” Julian said, smiling. “The success of the Charlotte Hornets uniforms got Coach Smith’s attention. … It was a quick realization for me that this was the single toughest assignment I’ve ever been given in my life.

“Not only were the colors chosen. Not only were there only four inches to make any real statement on the sides of the uniform because of NCAA regulations — but if I messed up, I would never go home.”

The first step for Julian was to create a new fabric. The jersey material at that time, he said, was abrasive and forced players to wear t-shirts under the uniform. His newly created fabric, however, would alleviate that problem.

Julian then turned his attention to rejuvenating the blue that the Tar Heels had been sporting for the previous few seasons. Over time the jerseys had become “TV blue,” because the original Carolina blue appeared gray on television. To create a brighter illusion, the jerseys featured a stronger, deeper blue than the classic color. A return to the correct hue was crucial for Julian.

Julian then experimented with dozens of designs— including a quickly-rejected polo-style jersey with a collar and sleeves inspired by tennis players.

“But none of them were as good as the argyle,” he said.

Although some players knew the redesign was underway, for most — including then-sophomore Eric Montross —the buzz around the new jerseys was limited inside the locker room until they debuted in 1992.

“I think that it was probably a bigger deal outside of the athletes that would be wearing it because it was a change and it was an exciting change,” Montross said. “I think that for many of us, it was not that big of a deal. We were just excited to don a new uniform.”

To help make the final choice, Julian looked to Michael Jordan, a former UNC star who had already become a perennial NBA All-Star. Admiring the player’s sense of style, Julian sent a prototype of the uniform to Jordan in Chicago; he tested it out during at least one Bulls practice.

Jordan liked it. Smith liked it. After several conference calls, argyle was selected. Perhaps fittingly, the argyle pattern was what earned the designer his first fashion award years before.

Julian had already tested his “lucky argyle” before putting it on the Tar Heels jersey. The year after Julian built the design into Andretti’s race suit, the driver won his only national title. The linking diamonds then brought good fortune to Carolina; the team won the national championship in 1993 — just a year after first wearing the argyle.

“It was [Smith] and the players that won the championship, but I did make them look pretty good,” he said.

Julian is now hoping his lucky argyle will bring the same good fortune to the rest of the Tar Heels as they begin sporting the argyle next season.

“Carolina sports is in my blood,” he said. “… If you’re born and raised in Chapel Hill, and you don’t like sports, they leave you on the edge of a place called ‘Durham.’”