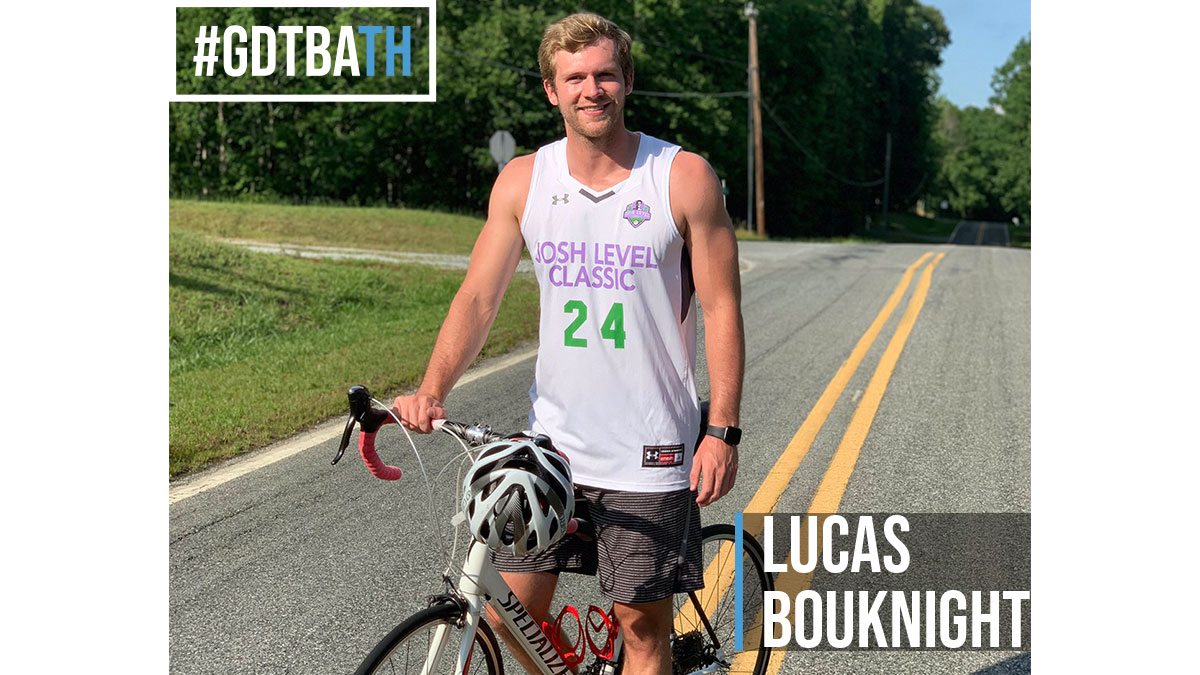 Growing up in Greensboro, North Carolina, Carolina medical student Lucas Bouknight would grab his bike and ride 30 miles around his hometown to kill time. Or at least until he was 16. Once he got his driver’s license, that hobby took a back seat.

Add in life as a Carolina undergraduate from 2014-2018, followed by the busy schedule of a first-year medical student at UNC School of Medicine, the bike sat stationary for years.

When the COVID-19 pandemic created a shift in Bouknight’s schedule, some extra time opened up, and with some time to kill again, he returned to his childhood hobby. This time, though, he added the challenging twist of finishing a century ride — a 100-mile trip from Chapel Hill to Greensboro and back — with less than three months to train.

“I was bored and thought I would go bike ride,” said Bouknight, a former player and assistant coach of the Carolina JV basketball team. “I just went out on a ride one day and thought, ‘I forgot how awesome this is.’ So, I started biking more and more. I’m somebody who likes to have a goal in mind when I do something, so I just decided to train to do 100 miles.”

Bouknight’s journey back to the saddle started on a friend’s mountain bike that was too small and not designed for the 20-mile rides through Hillsborough’s country roads. But early-on, the rides gave him a chance to disconnect from his schoolwork and the stresses of the pandemic.

“It is just me and my stony lonesome. The only thing that I can do is pedal,” Bouknight said. “It really gives me a good time to process everything going on in my life because I can’t do anything else. It’s very freeing.”

He eventually picked up a proper road bike and began riding three times a week, working his way up to an 80-mile ride in early June.

While the self-imposed challenge started as a way to spend his newfound time, Bouknight wanted the effort to have a tangible result greater than just simply saying that he rode 100 miles once. He decided to give back to his community and turn his efforts into a charity ride for the SmileforJosh Foundation.

“I wanted to take my restlessness and boredom and make it more meaningful,” Bouknight said. “The 100 miles, if I only do it for myself, it only benefits me, but I wanted to benefit however many people can be benefited through Smile for Josh.”

The SmileforJosh Foundation’s primary fundraiser each spring is the Josh Level Classic, which draws top-tier basketball players from around the state for a charity game. But with the pandemic, the nonprofit was forced to cancel this year’s game, losing its main source of income and straining its programs.

Long connected with the charity and the North Carolina basketball community that has supported its efforts for the past three years, Bouknight wanted to help make up some of the lost money by asking friends and family to support his century ride journey.

On June 13, the Tar Heel achieved his goal of the century ride — riding to and from Greensboro in six-and-a-half-hours — and netted more than $1,300 for foundation, which will use the donations to support its college scholarship program.

With the ride behind him, the bike may stay parked for a little while, but Bouknight is eager to make the charity ride an annual spring trek.

“I want to do this every year for SmileforJosh. I could definitely see myself training to do another century in another year,” he said. “I can’t imagine a better way to spend Saturday mornings than on my bike, getting myself ready for something and highlighting SmileforJosh and the outreach that they do.”