Mollie Yacano can’t remember a time when she wasn’t fascinated by the North Carolina coast. She’s always wanted to be a marine scientist, even when she didn’t know the word for studying the ocean.

“My entire life, every time someone asked me what I wanted to do when I grew up, I always said, ‘study the ocean,’” says Yacano, a Ph.D. candidate studying marine science in the College of Arts & Sciences. “Though 5-year-old me thought studying the ocean meant turtles, not marshes and nutrients.”

Yacano grew up in Richmond, Virginia, but spent every summer visiting Corolla, North Carolina, on the Outer Banks, where she grew her interest in marine sciences, got her first job, learned to drive and decided to pursue an academic career in marine biogeochemistry.

“I have a field site in Corolla as part of my dissertation project, so it’s a great feeling to get to study an area I’ve spent so much time in and means so much to me,” Yacano says.

After studying marine science and archaeology as an undergraduate, Yacano wanted to return to North Carolina to study environmental changes on the coast, conducting her research at the UNC Institute of Marine Sciences in Morehead City in the Piehler lab. When she came to IMS and began working in the field, she became intrigued by Phragmites australis, a common reed plant that is an invasive species in North Carolina that grows more than 10 feet high in thick clusters and pushes out native species.

Yacano saw another side of the plant.

“Phragmites is often found in disturbed ecosystems, which are areas where human or natural processes have resulted in degradation of the native system. Disturbances can include erosion, development and excess nutrient conditions from fertilizers or sewer systems,” Yacano says. “I am particularly interested in understanding the role Phragmites can have in preventing further decline of these habitats and how this can help us better protect our coasts.” 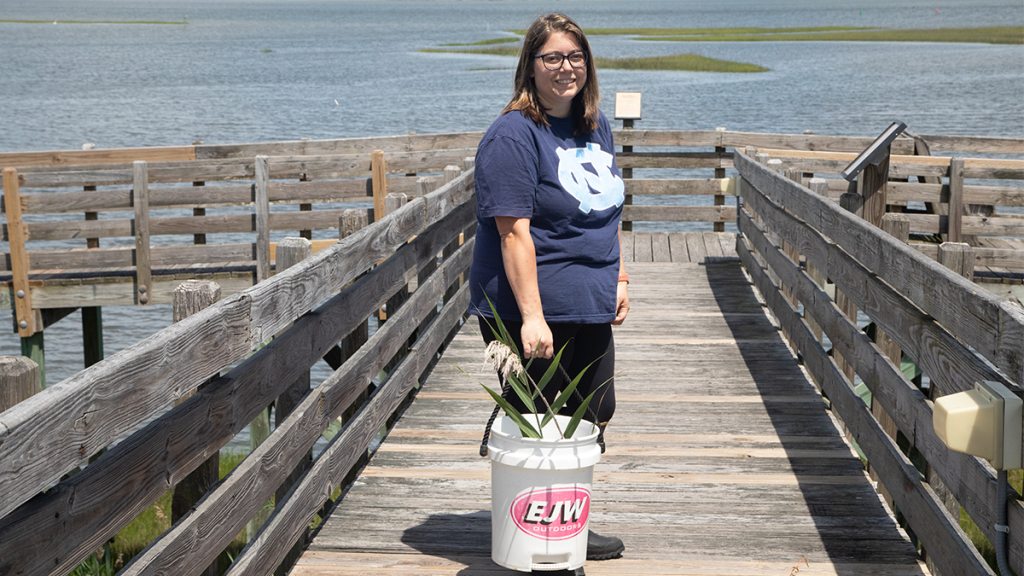 Yacano holds stalk and soil samples of phragmites, an invasive reed that spreads quickly on the coast.

Current invasive species management focuses on eradicating Phragmites when found, but those measures aren’t always in the best interest of the ecosystem and those living near it. According to Yacano, the herbicides used to destroy Phragmites are costly, can be harmful to the native species and include exposure risks for those living nearby.

“Phragmites is an extremely resilient plant, so attempts to eradicate it are often unsuccessful. We can spray, burn and cut it, but it often grows back. A good comparison is kudzu,” Yacano says. “In the U.S., we spend millions of dollars trying to rid ourselves of Phragmites, and I am interested in changing the way we approach management.”

Yacano notes that while Phragmites can lower biodiversity, crowd out shorter plants and potentially make it difficult for small species like turtles to navigate the thick reeds, its potential for combatting climate change and nutrient pollution should also be weighed when considering removal.

“Several studies have found that Phragmites can reduce erosion and stabilize shorelines, which is particularly important in the face of rising sea levels,” Yacano says. 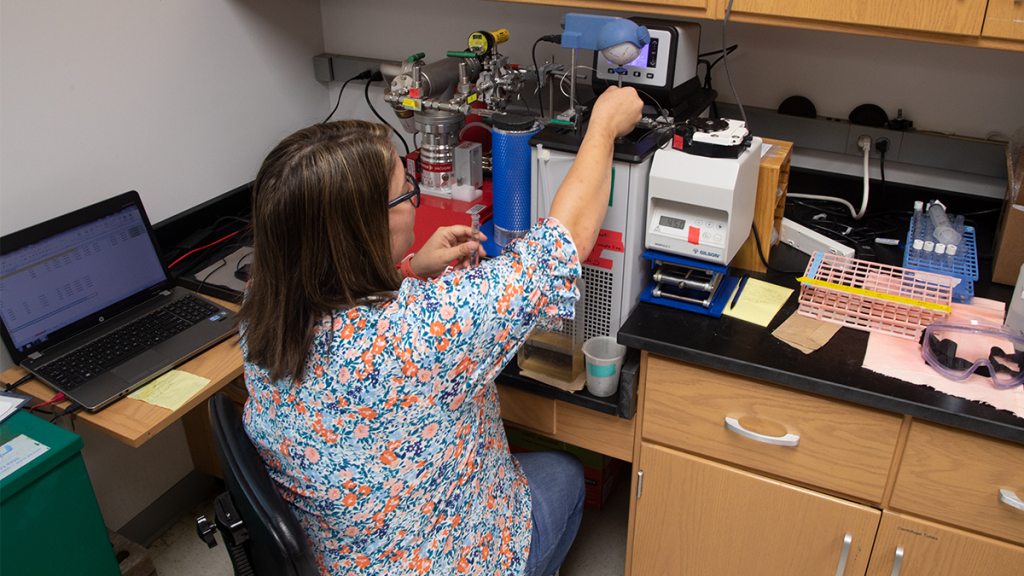 Yacano runs a water sample through a mass spectrometer to determine the nutrient composition of samples taken from Phragmites sediments.

Nitrogen-heavy fertilizers often wash off fields and into coastal ecosystems, which can allow toxic algae to grow rampant and cause low oxygen events resulting in the death of fish in the system. While many marsh plants on the North Carolina coast remove excess nitrogen from the water, Yacano’s research has found Phragmites can do so more effectively in tidal areas than common native species.

Yacano hopes that her research, along with others in the field, will broaden the management conversation surrounding Phragmites and improve the plant’s reputation, though she knows that determining the best strategies for managing invasive species are rarely clear-cut.

“I’ve realized during my time at the Institute of Marine Sciences that I have a particular interest in how my research can be applied directly to real-life coastal management scenarios and help preserve the coastline that shaped my childhood,” Yacano says. “When I complete my studies, I hope to pursue research opportunities that allow me to continue studying coastal nutrient cycling and contribute towards building a better understanding of systems most vulnerable to climate change and human impacts.”