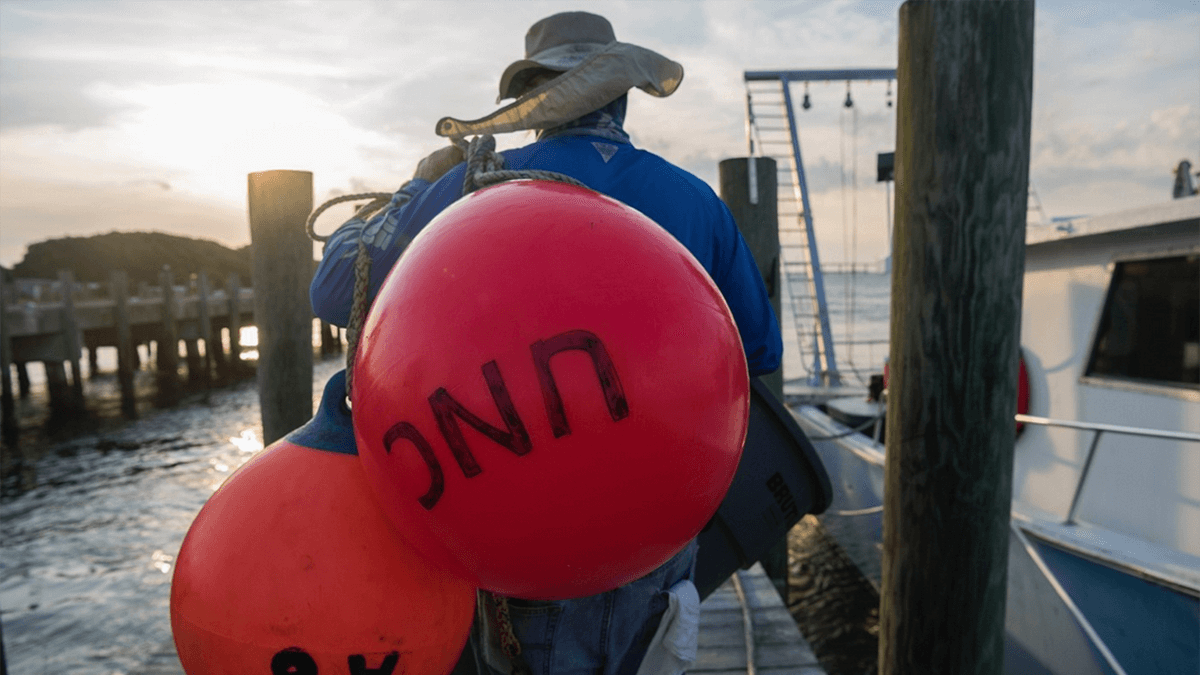 When most North Carolinians learn that a hurricane is heading to their state, they stock up on bottled water and fill their cars with gas.

Researchers at the UNC Institute of Marine Sciences in Morehead City take a different approach. They spring into action to begin studying the impacts of the hurricane on the community and the environment.

The 2017 hurricane season, which concludes on Nov. 30, gave them plenty of chances to conduct novel research.

One of those opportunities arose last September, when Hurricane Irma threatened to make landfall in North Carolina. One sunny afternoon before Irma’s potential arrival, graduate student Jana Haddad sloshed through a saltmarsh in Bogue Sound to deploy sensors for a project exploring wave movement through marshes during storms, which is relevant for nearby homeowners.

The data collected would build on a study led by IMS research associate Chris Voss and Johanna Rosman, a joint research associate professor in marine sciences, that seeks to understand the relationship between wave energy and vegetation properties.

“We’re interested in the capacity of marshes to protect the shoreline and most data has been collected under normal wave conditions,” Rosman said. “The storm lets us measure greater wave heights, longer waves and higher water levels.”

Additional research focusing on wave energy is underway at nearby Shackleford and Core Banks. “We’re interested in seeing how coastal flooding models, like the ADCIRC model, can really predict dune erosion,” says Jessie Straub, a graduate student in the lab of Antonio Rodriguez, a joint professor in marine sciences. The group will analyze data from water level loggers and cameras that were set up along the shoreline last summer, and will work with other labs at UNC-Chapel Hill and Duke University to connect flooding patterns to dune resiliency.

For other research groups at IMS, the impacts of the storm will determine their next move. Carter Smith, a graduate student in the lab of Charles Peterson, a joint distinguished professor in marine sciences, has prepared for hurricane season for months. Smith’s work aims to identify the impact of storms on shoreline profiles.

“The overall goal of our study is to see how different types of shorelines change after a storm,” Smith said. “We also record storm damage costs to private property.” For the past two summers, she has recorded shoreline conditions before the hurricane seasons, and would revisit the sites in the event of a storm.

Students and staff in the lab of Hans Paerl, a Kenan Professor of Marine and Environmental Sciences, also modify their research schedule to augment water quality records that have been collected since 1994. “As a general rule of thumb, we increase our monitoring of the Neuse [River Estuary] from twice a month, to a trip before and three following the storm” said Jeremy Braddy, a research technician. “This type of sampling gives us a good idea of a before and after effect.”

Safety is another concern with potential storms, since the institute itself needs to be physically prepared. Equipment is secured or moved inside. “We all love hurricane data, but if we get hit hard we risk losing tens or hundreds of thousands of dollars’ worth of equipment,” said Michael Piehler, a joint associate professor of marine sciences. Scientific equipment may need to be retrieved from the field, and depending on forecasts, the institute’s research vessel, the R/V Capricorn,might be relocated.

That all adds up to a flurry of activity, but it’s well worth it. “It’s better to be over-prepared and underwhelmed by a hurricane,” said IMS director Rick Luettich.

With its extensive preparations, IMS is ready to not only weather hurricanes, but use them as opportunities to advance marine science and better protect coastlines in North Carolina and across the country.