The Rameses that graces Kenan Memorial Stadium today is the latest in a long line of celebrated ovine royalty. But every royal family has its secrets.

We know the original Rameses took the throne in 1924, but who was next in line for the crown? And where did today’s lineage truly begin? We set out to uncover the truth.

“It feels like a Shakespearian tragedy, doesn’t it?” said University Archivist Nicholas Graham, who helped us trace the story of Rameses to its origin. “Who’s going to be the successor?”

According to Graham, Rameses’ early history is difficult to track down, marked by its fair share of mystery.

“The early history is very confusing and difficult to trace. The numbers are off,” he said. “You basically have this student newspaper that comes out weekly with passing references to Rameses, so you fill in the blanks.”

A star is born

We do know that the tradition began in 1924, when head cheerleader Vic Huggins was inspired by footballer Jack “The Battering Ram” Merritt to acquire a live ram. 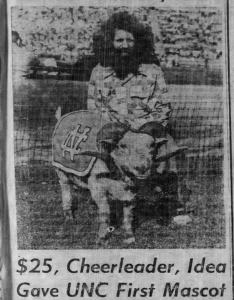 With $25 and the blessing of the athletics department, Huggins got a pedigreed ram from either Texas or Tennessee (records differ here, but the important thing is that he got a real live ram).

The story goes that while State had its wolf and Georgia its bulldog, Huggins chose a ram “as indicative of the fighting brand of football the team was playing under the Fetzer brothers.”

That ram — the original Rameses — made his debut at a game against the Virginia Military Institute on Nov. 8, 1924.

“We hadn’t done too well in the first two games of the season, but we beat VMI three to nothing,” Huggins told the Daily Tar Heel years later, reflecting on the game. “Rameses was quite the thing from then on.”

Graham believes students paraded Rameses across the quad and that he quickly became something of a campus pet.

While some reports say that Rameses lived with the Hogan family — the current caretakers — others say he was living in Caldwell Hall under the care of students. But the original Rameses died before making a return to Kenan Stadium for 1925.

The next football season, a new Rameses appeared on the scene. Rumor has it that students sold lottery tickets to raise the money to acquire Rameses II, but this ram, too, died a year after becoming Carolina’s mascot.

Based on an employee’s account in the Daily Tar Heel at the time, Rameses II “became sick for some unknown reason and died shortly thereafter.” Whatever the case, Graham said there appeared to be no ram for several years after these two tragic deaths.

In his place, Carolina students apparently organized a cheering section known nationwide as “The Cheerios.” They were decidedly less cool than Rameses, but they kept the spirit alive under the leadership of Kay Kyser ’27, who went on to become a successful radio personality and bandleader.

In 1933, Rameses made a comeback. Carolina acquired Rameses III from the state agricultural farm in Willard, North Carolina. He debuted at a reception, pep rally and coronation the night before the Duke-Carolina football game and served for three years until his death in 1936. The Daily Tar Heel announced his passing with grandeur: “The King is Dead, long live the King!”

Still no son and heir

Beginning with Rameses IV in 1936, we can confirm that Rameses lived with the Hogan family on its farm in Orange County. Is this where the first true lineage began? It’s hard to say. In 1941, the paper reported that this Rameses welcomed twin daughters but “still no son and heir.”

If Rameses IV is the great, great, great (etc.) grandparent of more recent mascots, he starts the lineage with a bang. According to the student reporters, he was “a full-bred Texas ram said to be full of football spirit.” 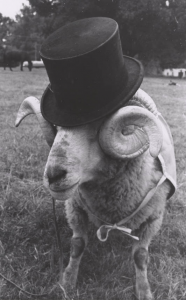 During his coronation ceremony, the audience was warned to keep a safe distance. Why? “For by mounting the rostrum around the throne may invoke the ready anger of the new monarch and lead to a speedy downfall of all parties concerned,” the Daily Tar Heel reported.

This particular ram also survived several kidnapping attempts by students from rival schools, but that’s a story of its own. Don Basnight, Henry Hogan’s grandson, remembers protecting the rams from opposing teams, a dream come true for a little kid who loved the Tar Heels.

“I used to sit out there at night with my cousins and keep watch,” Basnight said. “That was awesome for us as kids.”

Skipping ahead to 1955, the seventh Rameses was christened. The paper called this Rameses “a direct descendent in a line of Carolina mascots for the past 33 years.” Perhaps the timeline is in question, but these dates don’t add up.

Basnight, who serves as a handler today, said that before his time, “the mascot was whichever ram you could catch.”

We know that the Hogans described Rameses VII as “a pretty mean, ornery ram,” and that he was a direct descendent of at least the previous two rams. Henry Hogan reportedly appointed his daughter Jane Hogan to “scout around and find another top-notch ram” to replace him. So maybe a new lineage began here, when Rameses VII retired in 1964 after nearly a decade of service. 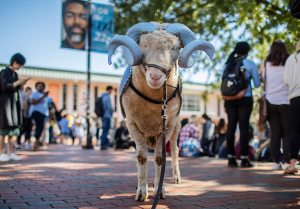 But this is also the time period when students and the University began to lose track of how many rams have assumed the throne. For example, sources refer to Rameses IX in 1976 but refer to Rameses X a year earlier in 1975.

Basnight said the current Rameses is our 21st ram, a good-natured ovine friend who loves people and the sheep and goats with whom he lives. Next season will bring a new mascot, but which ram will assume the role is yet to be decided.

A gift to the Tar Heel Nation

Whether the successor is Rameses XXI’s son, a somewhat wild but “really beautiful” two-year-old ram, or a new ram altogether, one thing is for sure: the next Rameses will continue a longstanding tradition, bringing joy and school spirit to Tar Heels all over the world.

“I’ve got so many good memories taking Rameses to every game,” Basnight said. “There’s always this cluster of kids around the Rameses like it’s a 4-year-old’s soccer game. I love taking him somewhere and handing the ram over to an excited member of the Tar Heel Nation.”