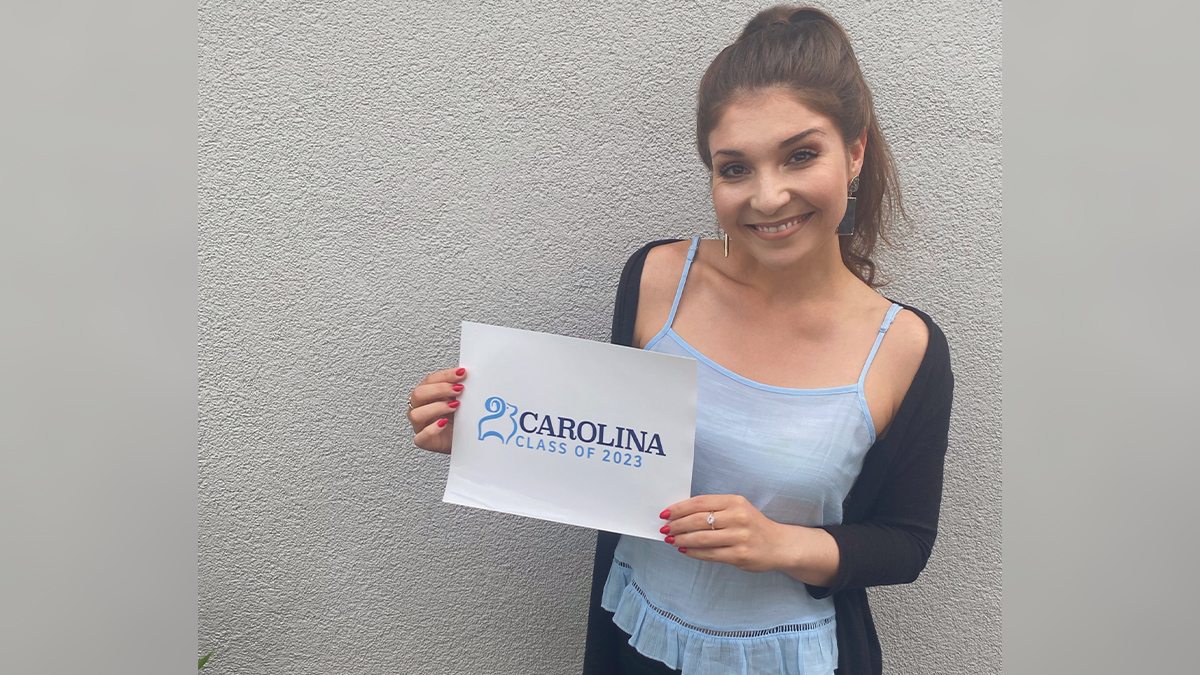 Katharina Malena Krause, an incoming graduate student from Hanover, Germany, has wanted to be a Tar Heel since she was 15 years old and first learned about Carolina from her high school English teacher.

He’d attended UNC-Chapel Hill and spoke so highly about it that she thought about applying as an undergrad. But, since university is free in Germany, Krause stayed in her home country to study while thinking about other ways to get to North Carolina.

After earning her bachelor’s in journalism and corporate communications, she took a role at the engineering firm Bosch. “I knew their American headquarters were in Raleigh, so I emailed the general manager and asked if I could intern there,” she says. “They happened to have an open spot. That’s how I moved to North Carolina.”

Krause lived in Raleigh between 2018 and 2019, working in Bosch’s marketing department, before returning to Germany in early 2020. Her experience in North Carolina only solidified her desire to return — as a Tar Heel.

“In that time, I heard about the Transatlantic Masters Program, and I applied,” she explains. “I thought it was a perfect program because it was what I did working for Bosch.”

Now, the new Tar Heel will spend one year in Chapel Hill studying political science before finishing the program at Humboldt University in Berlin as part of the second-year requirement. It’s an experience a long time in the making and one she’s ready to soak up.

What does it mean to you to be a Tar Heel?

It sounds a little cheesy but it’s a dream come true. I’ve been wanting to go to Carolina since high school. I never really thought it would happen because since school is free in Germany, people don’t set up college funds for their kids. It would’ve been more money to do undergrad here, so I was always like, “Well, maybe it’s never going to happen.”

What are you most looking forward to in your first semester?

Catching up with my old life, but also being an actual part of the student body for real and knowing that I really belong to this community. I do think it’s a very unique community. At Carolina, they make you feel like you really belong here. Other people in other schools might say the same thing, but coming from Germany, the college experience is different. People aren’t as proud of their college — it’s not a thing.

What will you be studying at Carolina?

Political science as part of the Transatlantic Masters Program. It’s basically transatlantic studies and European government. It’s a really unique program with one year in the U.S. and one year in Europe. My second year will be at Humboldt University in Berlin.

The trigger for me was the transatlantic studies part. That’s what I wrote my thesis in for my bachelor’s. And then with everything going on politically in the U.S. last year, I got even more excited.

What do you hope to bring to the Carolina community?

Humor and German chocolate. We have really good chocolate. I brought a lot. That’s how I’m planning to make friends. And I know it’s kind of a prejudice that Germans aren’t funny, so I’m hoping I can turn that around.