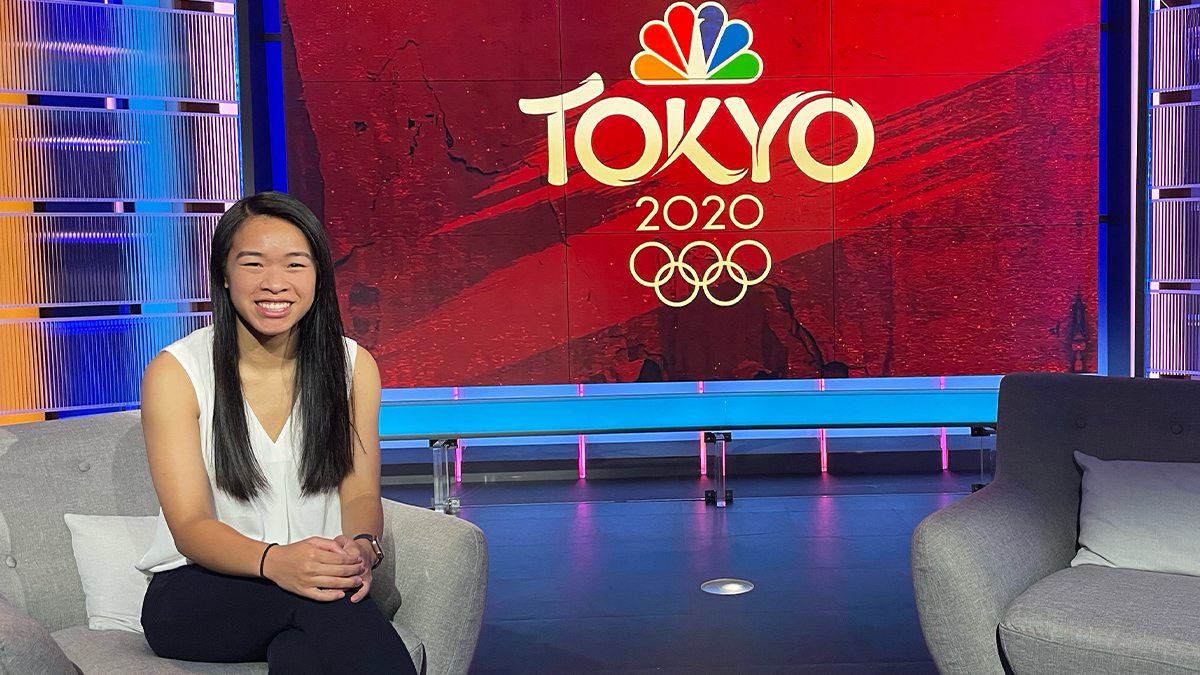 If she wasn’t helping to get more students to games as a member of Carolina Fever, she was likely covering the teams for the University’s weekly, student-produced sports broadcast, Sports Xtra. If she wasn’t doing either of those, Rauwald ’20 was likely in the stands herself cheering for the Tar Heels.

Those experiences were more than just ways to pass the time between classes. They were propelling Rauwald toward her goal of working in sports media — a dream that Rauwald has been carrying out since she graduated from UNC-Chapel Hill in 2020 with a degree in journalism and communication. As a member of the NBC Sports staff, Rauwald has found herself at the center of Tokyo Olympics coverage as a researcher, preparing promotions for Sunday Night Football as a content coordinator and now producing features on Winter Olympians heading to the 2022 Games.

Rauwald has always been a massive sports fan and has always known she wanted to be near the action. That’s what brought the Durham native to Carolina and the UNC Hussman School of Journalism and Media in the first place.

Though she initially planned on becoming a sports broadcaster, working with Sports Xtra opened the door to another aspect of sports reporting

“My involvement with that sportscast really made me fall in love with storytelling, specifically with athletes,” she said.

She further developed her knack for video storytelling by working with Carolina Fever, a student group that runs a rewards-based program to encourage students to attend all Tar Heel sporting events. Rauwald was a member of the group’s marketing team, including leading the digital media and public relations committees. As she created promotional videos for the group, she began to hone her style and see the impact of video storytelling.

During her junior and senior years, Rauwald participated in internships at NBC Sports Philadelphia, NBC Entertainment in Los Angeles and the Tonight Show Starring Jimmy Fallon in New York City. After she graduated in 2020, she accepted her first job at NBC Sports in Stamford, Connecticut.

Rauwald’s first job at NBC Sports was to oversee the production of on-air promotions for properties like Sunday Night Football and the Premier League. She worked behind the scenes with directors, editors, producers and voice-over artists to bring the promotions to life.

This past summer, she served as a researcher for NBC Sports’ coverage of the Tokyo Summer Olympics. Working from Stamford, but on Tokyo time, Rauwald became a short-term expert on soccer, shooting and volleyball to provide the on-air talent with the information they needed for their studio shows and broadcasts.

“We would provide the talent, producers and directors with game recaps and summaries to enhance their on-air broadcasts’ coverage,” Rauwald said. “A lot of the stuff that talent was saying on the air, we had provided them word for word, so we had to look up all these interesting niche facts. It was really cool working the Olympics, especially with so many other people who were just as passionate about sports as I am. It was a really magical moment.”

Both of those opportunities have given her the chance to explore the extensive possibilities in sports media, but they also largely confirmed that she loved telling stories. This week, Rauwald transitioned into a new role that will allow her to tap back into that skill set.

“I’ll be doing athlete profiles and features for the Winter Olympics,” she said. “I’m really excited for that. That’s the direction I want to go, and Sports Xtra helped shape that vision for me.”

Though her new career is getting her close to the biggest events in the sporting world, Rauwald’s keeping the Tar Heels and the experiences the led her to her career close to her heart.

“I miss going to games with friends,” she said. “My time with Carolina Fever brought me to my closest friends, and I think that having that core mission of supporting all Tar Heel athletics is something that really unified us. Being able to go to games and experience those historic moments and championship wins was something that I definitely miss.”