What do you do when a gastrointestinal illness takes out half of your research team that traveled nearly 8,000 miles to Nepal to study the effects of climate change on Buddhist holy lakes?

An interdisciplinary group of Carolina researchers first journeyed to Mount Everest’s Khumbu region in summer 2018, returned in fall 2019 and — after COVID delayed the original return plans — made the trek again to the Gokyo Lakes in summer 2022.

Leve was not able to make the trek to the lakes this year due to other research she was conducting in Nepal, but she laid important groundwork for the team’s journey by securing needed paperwork and permits. She has provided ongoing counsel and support on this high-altitude region that is sacred to the Buddhist tradition. 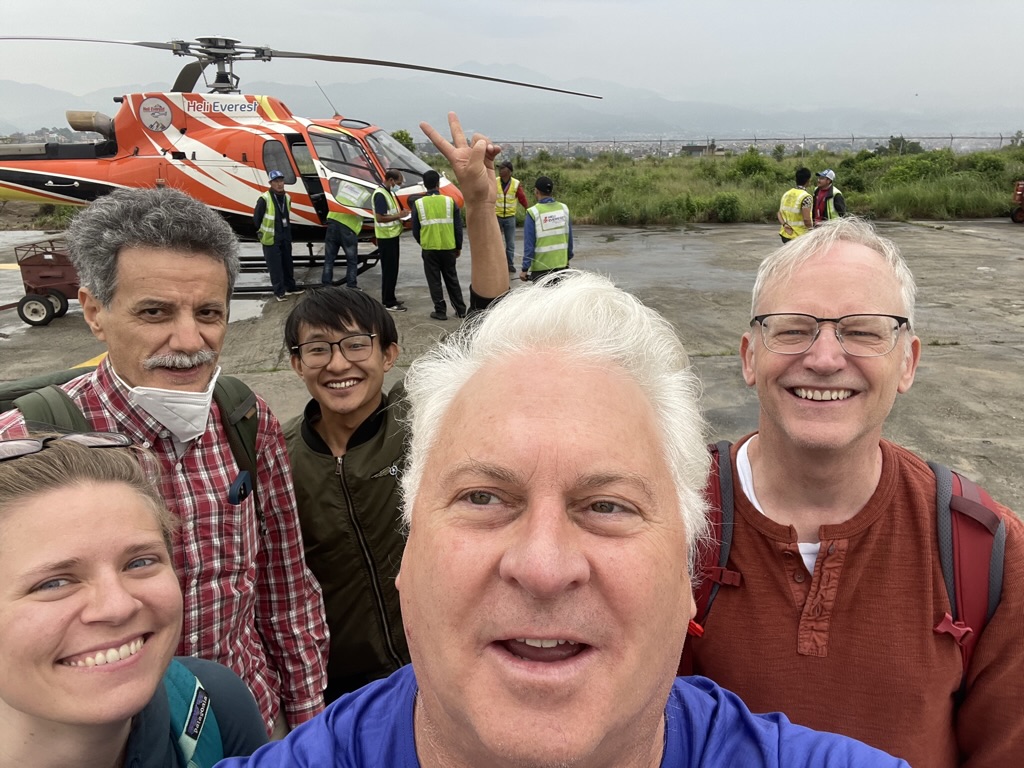 The Nepal summer 2022 team from left to right (with their guide making the peace sign in the background): Emily Eidam, Roberto Camassa, Rich McLaughlin and Harvey Seim.

“I can tell you my sad story,” began Seim, as he relayed his version of the trip. Altitude sickness, a common occurrence, had plagued the team on previous treks. But this time a new challenge cropped up.

“Emily and I were only in the mountains and on the trail for two days. It became pretty obvious that we had a GI bug — and as I was slowly getting better, she was getting worse,” said Seim, who has done research from North Carolina to the Galapagos. “Our contribution was largely to lead the field program, and we never prepared for this contingency. So Rich and Roberto continued on.”

The good news? Camassa and McLaughlin were able to successfully retrieve all 14 thermistors and pressure sensors that had been placed in fall 2019 in lake 4, one of six lakes, to measure lake temperature and pressure at different depths.

But it wasn’t easy.

McLaughlin was also battling the same GI bug and has ongoing knee problems, although braces, viscous gel injections and physical therapy before the trip helped some.

But this journey through the peaks and valleys of Sagarmatha National Park is not for the faint-hearted.

Once you get deep into the mountains, there are no vehicles, no roads. As Seim noted, “It’s people or animal power that moves everything — you are on the trails with hundreds of donkeys and yaks.” You can count on rain and snow and cloudy conditions.

The trails are steep and sometimes slippery and that alone “can be mentally taxing,” he said.

McLaughlin tallied up the total hiking distance at about 85 miles in two weeks, but that’s not the whole story.

“It’s the elevation rise and fall that’s challenging,” added McLaughlin, who is chair of the mathematics department. “You might climb up to 13,000 feet then down to 11,000 as the trail descends and you hop around rocks and cliffs. Then it’s back up again. The total ‘up’ is probably more like 20,000 feet.”

Adventures on the lake

Oh, the wind. And the cold. The water temperature in the lake is 5 to 6 degrees Celsius (about 41 to 42 degrees Fahrenheit), so you don’t want to fall in.

The watercraft used for research is an inflatable river raft that has to be packed up and hiked in. The nasty GI infection also hit one of the guides, who had to be helicoptered out of the region, so Camassa and McLaughlin were left with a less experienced paddler.

The first two days out on the lake did not go well. They were having trouble locating the previously deployed scientific instruments. They tried texting Seim and Eidam (who were recovering in Kathmandu, Nepal’s capital city), using Garmin inReach satellite communication devices, but the marine scientists were not getting the messages. The internet was down, so phone calls were also not going through.

On day three, Camassa and McLaughlin were able to connect with Seim via a brief phone call, although the signal was weak. The next day they vowed to try one last time on the water.

“Harvey suggested if all else fails sort of spiraling in against the wind, doing loops around the mooring while dragging the grappling hook to try to pull the thermistors out,” said Camassa, who is the Kenan Distinguished Professor of Mathematics and is on a Rothschild Visiting Professorship at the University of Cambridge this semester.

“It was like a Hail Mary, a last-second shot with our feet on the out-of-bounds line. We were exhausted and running out of time,” McLaughlin added. “The fact that we managed to pull the instruments out was kind of like …”

“Like hitting a three-pointer at the buzzer!” Camassa said, laughing, finishing his colleague’s sentence. “It was the best thing that we could have possibly hoped for.”

After retrieving the instruments, McLaughlin said the team now has about four years of continuous data from lake 4. The holy lakes lie next to the Ngozumba glacier, the largest glacier in Nepal. The researchers are trying to understand how glacial melting due to climate change is impacting the physical and biological properties of the lakes.

“We’re trying to assess what’s happening to the lake level if certain changes in climate continue,” McLaughlin said. “The data is pretty exciting, but it’s a little bit alarming, too. It’s showing this continued trend of more precipitation, and the lake level is rising as things are melting.

“You can really see the glacier retreating in this four-year window that we’ve been going there. Although we have not done a detailed analysis on this new data, what we can say is that we are gaining a comprehensive understanding of how that valley and the system of lakes work and how they are responding to a new influx of water.”

The team is in the process of submitting a journal paper based on data from the first two trips.

This year the mathematicians added a new tool — drone photogrammetry — to help build out a more complete picture of what’s happening. By flying the drone in a grid pattern over different areas, the scientists are able to stitch the images together to construct a three-dimensional model of the topography of the region. They captured drone footage on lakes 4 and 5.

Jaye Cable, a marine scientist and senior associate dean for natural sciences in the College of Arts and Sciences, has provided ongoing help to the team in analyzing water samples they have collected.

The team will continue to develop the story of the changes in this region.

“It’s rare to be able to capture this much detail with instruments collecting data basically every half hour,” Camassa said. “It’s an arduous journey for sure, but this is the only way to access this area of the world. And we think this will help our understanding of what’s going on with the broader picture of climate change.”

The onset of monsoon season and a fatal plane crash that happened in the region during the same time the team was in Nepal made the journey home challenging. There were multiple flight cancellations and delays. Some of the scientific equipment made its way back home on a separate flight.

Seim, a seasoned researcher, said packing your patience and flexibility is just par for the course in doing science anywhere in the field.

“Welcome the adventure, and don’t be dismayed if things don’t go exactly as planned. Often you can pull small victories out of what might initially feel like defeat,” he said. “Be adaptable.”

The researchers agreed this was their most challenging trip to Nepal yet. Seim, a former chair of marine sciences, praised the value that an interdisciplinary team has brought to this work.

“One of the joys that stuck with me from my time as chair was getting to know faculty members in different disciplines,” he said. “On this team, the math guys and I share an interest in fluid dynamics, so we’re not that far apart scientifically — but learning from Lauren has been like having a personal lecturer on all of the social, political and religious intersections happening in Nepal.”

And sometimes you just have to pause and take it all in to appreciate this stunning area of the world, Seim added.

“It was magnificent when the clouds parted, and you saw these spectacular views. At times, I was in absolute awe.”