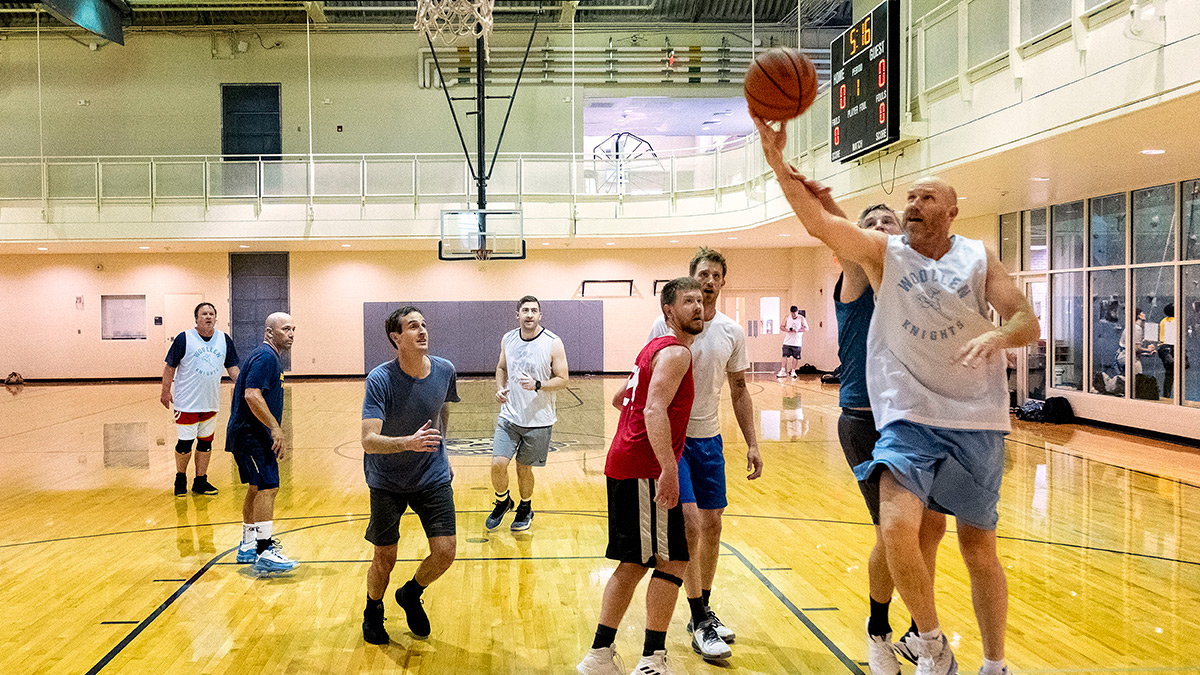 It was a temple for Carolina’s basketball faithful from 1938 to 1965. Today, Woollen Gymnasium is still a temple of sorts, attracting hundreds of recreational players over the past four decades whose games created lifelong friendships.

They call themselves the Woollen Knights.

The Order of Woollen’s home, with its eight courts and original section numbers on the walls, has mostly kept its endearing quirks as it aged: stuffy, humid, with 12 large, arched windows diffusing daylight through panes covered by faded blue paint. Shoe squeaks and dribbling thuds continue to greet players before they enter through clicking turnstiles. Its once dark-stained floors are a lighter shade now, with pickup games racing up and down most afternoons.

Here, the Knights developed a code of honor with two main tenets. First, an admonition: “No rough or dangerous play. We all have to go to work tomorrow.” The second, mostly unspoken but often demonstrated: “Friends over wins.”

The code and high-quality hoops attracted some 300 faculty, staff, students and alumni over the years. The lineage began with Mike Knowles ’67, ’71 (MD). A professor of pulmonary and critical care medicine, Knowles first played in The Temple as a local teenager in 1959. He’s launched a quarter of a million shots from Woollen’s floors, according to fellow Knight, Gary “Stat Man” Marbry ‘82.

Knowles, who played on Carolina’s 1963 freshman team, said that he liked getting exercise by playing pickup games. “It made me feel good, plus we’ve had a wonderful group of guys who played competitively and safely,” he said.

“Being in this ‘community’ meant that everybody had to play by community rules, mostly unspoken,” Knowles added. “When someone disagreed over calling a foul or the like, the community’s rule settled it.” Another aspect Knowles liked was being able to talk smack without the danger of fights. “That’s good for your soul, especially if you were having a bad week in life.”

Another mainstay, Peter Gilligan, a professor of microbiology-immunology and pathology-laboratory medicine, started playing with Knowles in 1985. He’s a commanding presence, his 6-foot-7-inch frame topped by a bearded, goggled face familiar to most players on campus.

Gilligan came to Carolina to work as a postdoctoral fellow in cystic fibrosis research and to teach. A former high school player, he gravitated to Woollen’s games with junior varsity and varsity players at times and with others such as Rick Boucher (director of Carolina’s Marsico Lung Institute and Cystic Fibrosis Center) and Jack Stutts ’79 (Ph.D., now clinical professor of pulmonology).

“Some JV players knew me because I was one of their professors in the medical school,” Gilligan remembers. One student, Peter Caprice ’90, ’95 (MD), played with the professors and brought friends such as Joe Quigg IV ‘88, who invited another, who invited another. Thus, began the cycle of Knights recruiting friends with the high skills and friendly demeanor appropriate for a knight.

Marbry, a business analyst for UNC Faculty Physicians, played in Woollen almost daily as a student and then at lunchtime early in his career, before earning knighthood 25 years ago.

“Peter and Jack Stutts and some other great players were out there,” Marbry said. “We had lots of laughs and everyone understood we had to work the next day, so we didn’t want anyone to get hurt. As you get older, that’s a big deal.”

In the ‘80s and ‘90s, the group called themselves “Hoopsters.” Stutts, whose work email address still has “hoopster” in it, managed the original email list. They played every Tuesday and Thursday, with some making mercenary appearances on various championship intramural teams. Even though some wore the same “uniform” — T-shirts sporting a drawing of Woollen and the words “The Temple” — when they played pickup, the Woollen Knights didn’t become an intramural team until the 2000s.

In 2007, the group played its first intramural game as “Hoopsters” competing in the graduate-faculty division. “It was too easy,” Marbry said. “We beat everybody by 30, 40, 50 points and won it all.”

By the next year, they had taken on the name Woollen Knights and entered two teams in the division with younger, faster undergraduate players.

“Some of these students were hotshots, really good. They watched our ‘Hoosiers’-style layups while warming up and they were laughing. Then, the games started and suddenly we were winning 23 to 4. They weren’t laughing anymore,” he said. “By the time the game was over, they usually showed some respect.”

Gilligan’s team won that year. They won again in 2013 and lost a 2017 overtime title game.

Community off the court

Kenan Penaskovic, associate professor of psychiatry, joined the Knights 15 years ago through an invitation from Tony Lindsey, a psychiatry professor, executive associate dean in the School of Medicine and chief of staff for UNC Hospitals. A medical resident at the time, Penaskovic recalls, “Mike, Peter and Tony got me involved in the game and also mentored my academic career by getting me to think about my next steps. The Knights are really about friendships we’ve formed and the mentorship provided.”

When they’re not on the court, the friends meet monthly over a meal, text each other and sometimes walk together.

Penaskovic and Gilligan think it is important to have a community where they can talk. “Kenan’s a psychiatrist and has seen what burnout is. We work in different places. Few are physicians or work at the medical center, so it’s a universal need,” Gilligan said.

“On Tuesday and Thursday mornings, when I’m going to work, I know I’ve got basketball with these guys, and I spend all day looking forward to having this time. I’m not the only one,” Marbry said.

Gilligan’s stories that illustrate the group’s wisdom and mentoring include one from the 1995 day when Wendell Williamson killed two people and wounded two others in downtown Chapel Hill.

“We’re chatting after playing that afternoon, like we often did, and Mike’s son Josh said, ‘Dad, if you were in the emergency room when this guy came in and he had just shot people, what would you do?’ Mike said, ‘I took an oath as a physician, and it’s not for me to say who I take care of. If that’s the guy I had to take care of, that’s what I’d do.

“Residents, fellows and faculty members are listening to this real conundrum. People were angry and scared, and Mike says, ‘This is what a physician does.’ That speaks to Mike’s character and the kind of conversations we have.”

Such memories keep over 100 former and current players on an email listserv through which “commissioner” Brent Cooper ’96, ’04 (M.S.), ’08 (Ed.D.) updates them on game times, gym closings and social outings. The resulting sense of community, Gilligan and Penaskovic say, is singularly important and includes sharing birthdays, births, funerals, illnesses, retirements, job changes, the joy and frustrations of parenting, getting older — all of life’s transitions.

Despite retreating hairlines and some slowing in step, the Knights play on — now in a newer temple, nearby Rams Head Recreation Center with its un-Woollen-like air-conditioning and uncrowded courts. Gilligan, the oldest Knight at 67, says that he hopes to play as long as his friend Marbry, 59, does.

There may be a time when the Knights no longer organize an intramural team, but they will always have Tuesdays and Thursdays for basketball and every day for friendships.

Read more faculty and staff stories on the Well