Carolina’s more than 336,300 alumni live around the country and around the world, but some have stuck close to home, and their presence here has enriched the Carolina community.

Get to know some of the Tar Heels whose businesses help make Chapel Hill one of the best college towns in the country. 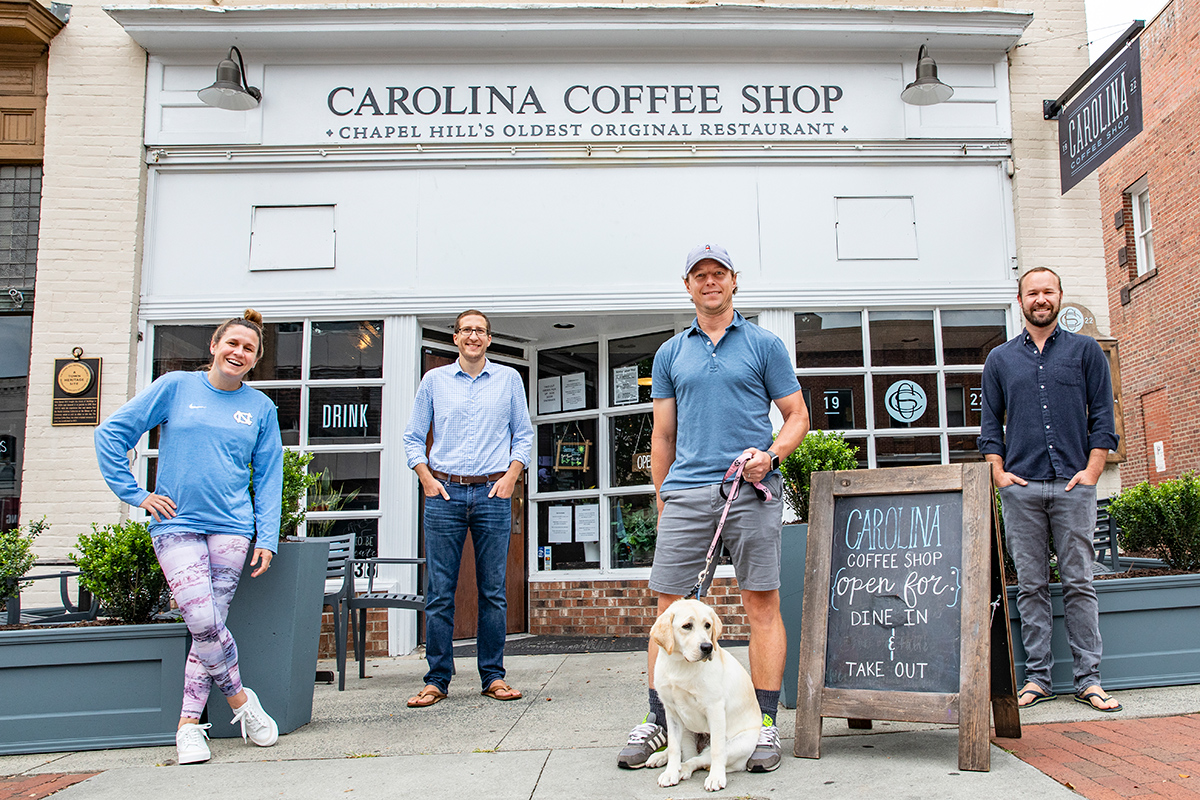 The oldest restaurant in Chapel Hill, the Carolina Coffee Shop has been a fundamental part of the community for nearly a century. In 2017, the shop was purchased by a group of Carolina alumni, including former professional soccer player Heather O’Reilly ’07, Clay Schossow ’08, David Werry ’06 and Jeff Hortman ’06, who wanted to carry on the restaurant’s legacy on Franklin Street.

“For generations, Carolina Coffee Shop has been a meeting place for all things Carolina — casual and warm, morning, day and night. None of us are veteran restauranteurs, but when we became aware that it was for sale and might not be able to continue on its nearly 100-year legacy, we felt compelled to do our part to continue the tradition. It’s a magical place because it is a part of the Carolina family. What is good for legacy businesses on Franklin Street is good for Carolina.” Jeff Hortman 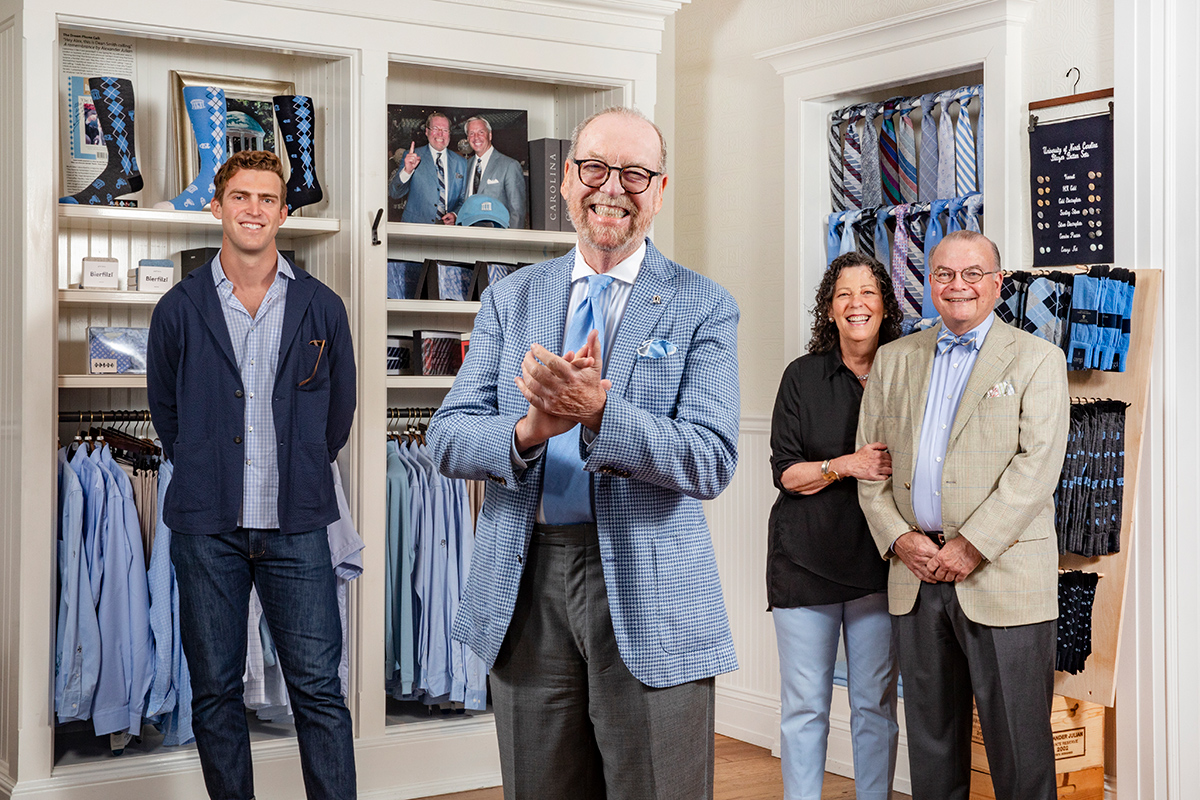 Alexander Julian poses for a portrait alongside (in the background from left to right) Huston Julian, Missy Julian-Fox and Michael Fox.

The Julian name has been a part of Chapel Hill since Maurice and Mary Julian opened the family’s store in 1942. Alexander Julian ’69 and Missy Julian-Fox ’73 grew up in the clothing store on Franklin Street, and they now maintain the iconic business alongside family members Michael Fox ’72, Huston Julian ’15 and Bart Fox. In addition to bringing colorful fashion to Chapel Hill, you can thank Julian’s for the classic Carolina argyle.

“I never would have made it the way I did had it not been for what I learned on Franklin Street. I always say that I went to two universities in Chapel Hill. One is on campus, and the other one is called Julian’s on Franklin Street when my father was running it and my mother was there. It’s very much a family business. Missy’s son, Bart, is the men’s manager and the custom specialist. My wife buys the women’s wear along with my daughters. I design, along with the team, most of the menswear. This is a labor of love, and it was my training ground. Everybody loves their hometown, but not everybody has a hometown like Chapel Hill. We eat, sleep and breathe Carolina.” Alexander Julian 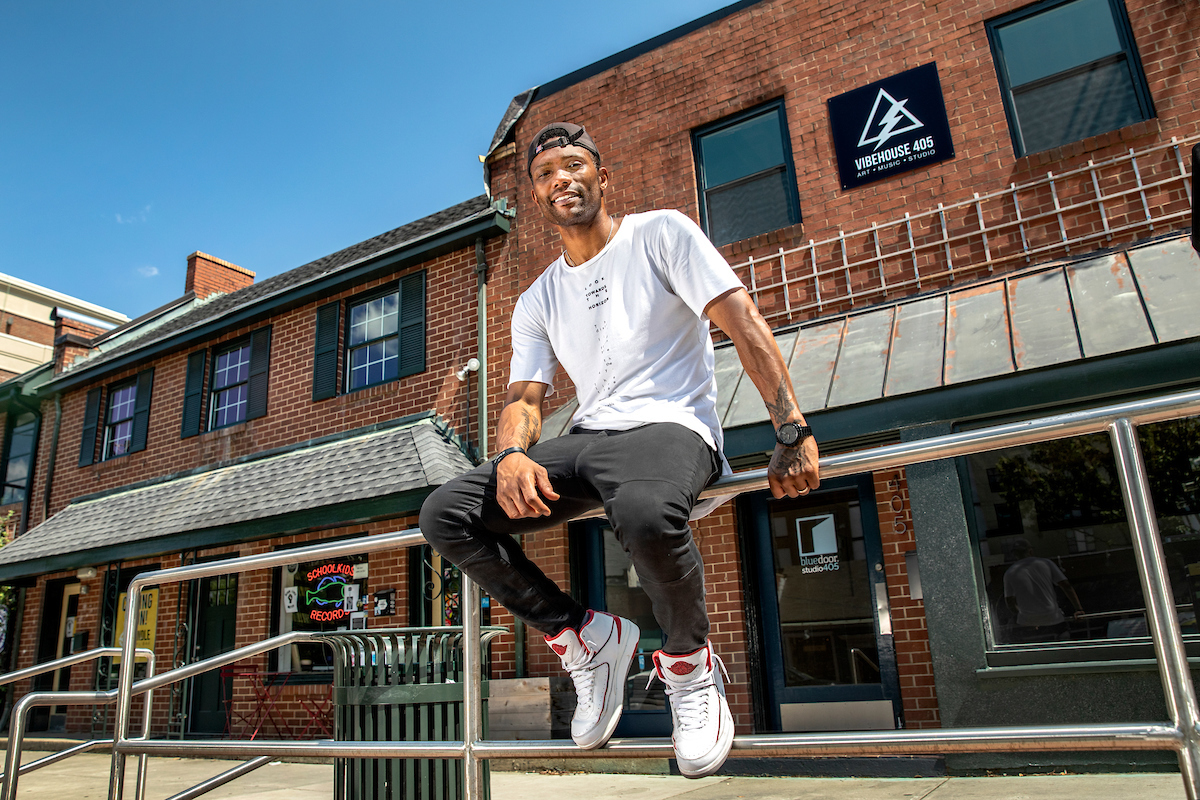 Better known as Kaze, Kevin Thomas ’12 is an accomplished recording artist who still calls Chapel Hill home. In 2018, the Tar Heel opened VibeHouse 405 on Franklin Street as a recording studio and gathering space for creatives.

“I wanted to put VibeHouse 405 in an environment that was conscious of community and art, and that supports the notion that dreams can come true. I’m proof of it. The tree bore fruit. I come from that community of art, music and culture being allowed to thrive, and this is where you can pursue that and support it. It only made sense for me to come back to those roots and plant that here for the next set of kids. This is also why you come to Chapel Hill: because of the connection between the town, the community and the University. That’s what I came to school for. I wanted VibeHouse 405 to resonate in that way so the next set of Heels coming in, or that are thinking about what school to go to, can see what paths have been blazed here.” Kevin Thomas 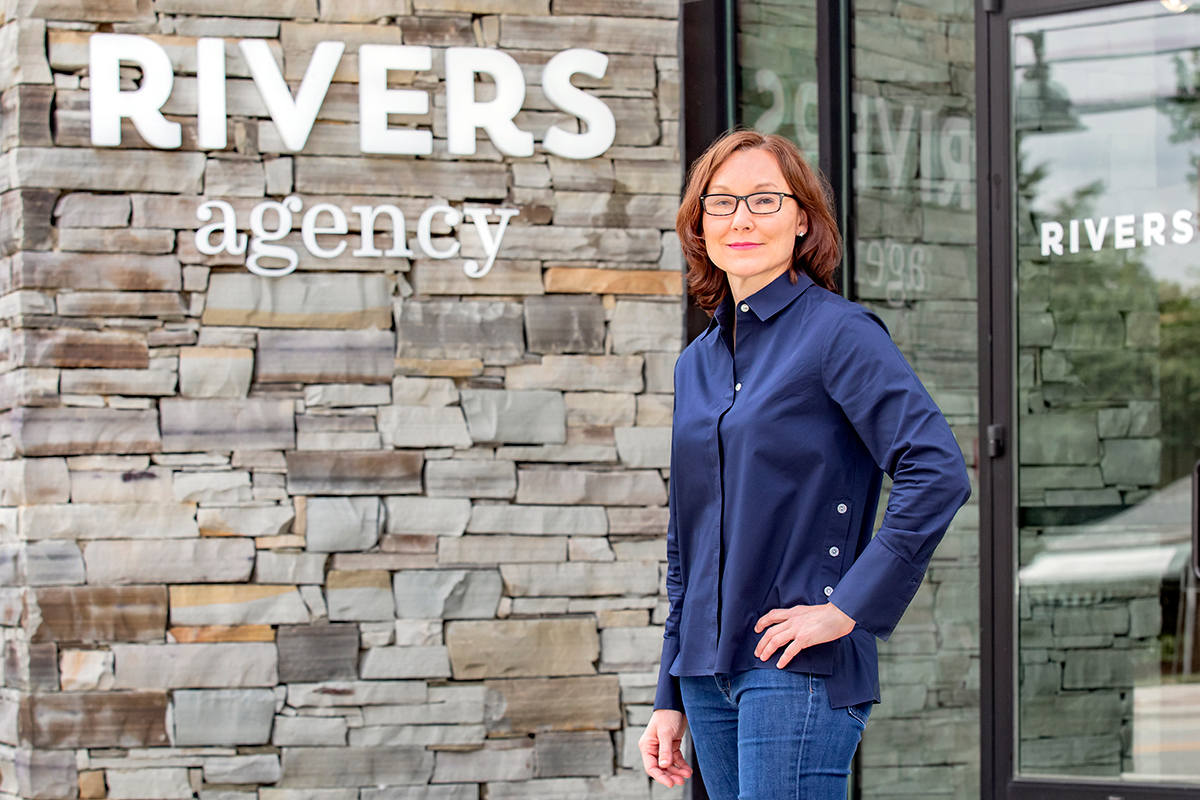 After graduating from Carolina in 1993, Lauren Rivers immediately opened the Rivers Agency in Chapel Hill. The small design firm has since grown to become the fifth-largest advertising agency in the Triangle.

“Our office sits on the border of Chapel Hill and Carrboro, right between the eclectic charm of downtown Chapel Hill and the free-thinking vibe of Carrboro. Our employees are attracted to the energy of working in the heart of the two vibrant towns and the walkability to locally-owned restaurants and shops, which helps us recruit and retain diverse talent. These days our idyllic small town is also a safe haven from the urban and densely populated cities that folks sometimes flock to after graduation. I love Chapel Hill, and I’m very lucky that I stayed after college. It’s a wonderful place to live, raise kids and build a business.” Lauren Rivers 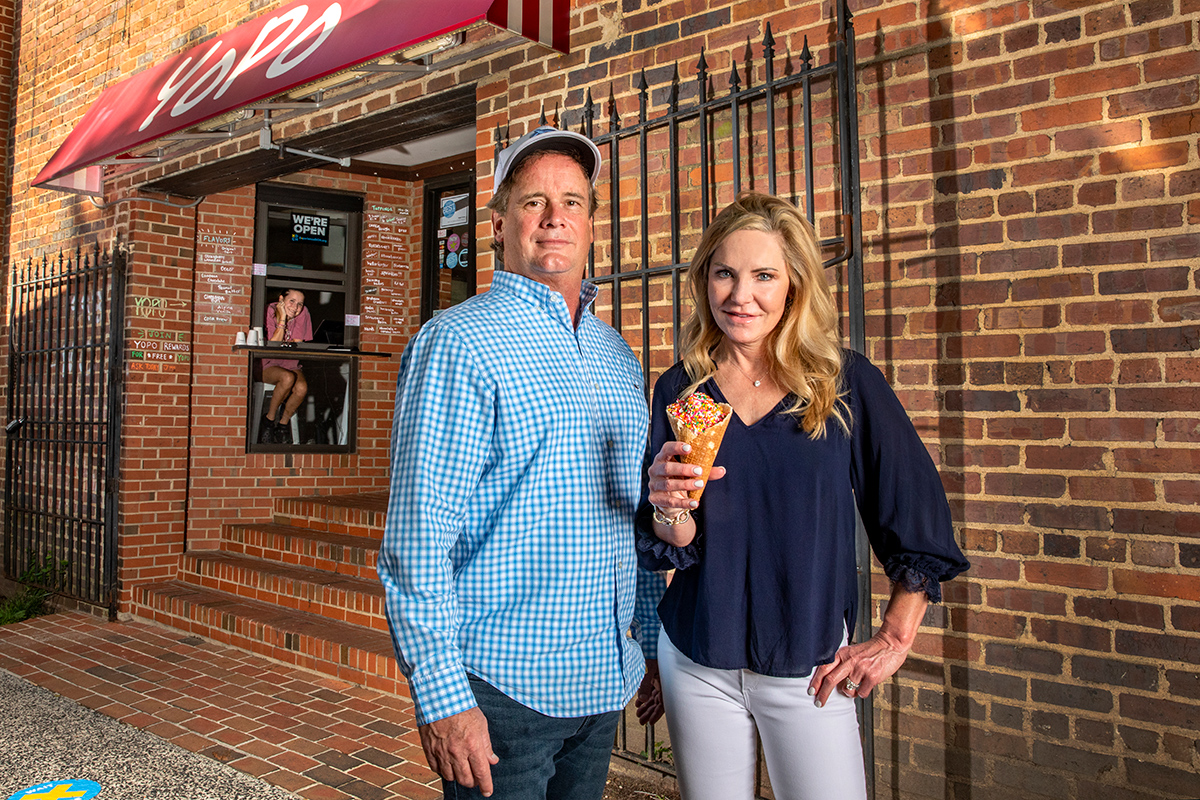 The Yogurt Pump, or YoPo as it is affectionally called, is a Chapel Hill treasure. Jim Kitchen ’87 and Susan Kitchen ’91 own Yogurt Pump, which is tucked away off of Franklin Street.

“Our family feels honored to own one of the few truly iconic businesses in this wonderful community, serving customers frozen yogurt since 1982. Having traveled the world over, Chapel Hill has a unique sense of community that doesn’t exist in many places. It is a special place because of its incredible beauty, quaintness and charm, proximity to activities and its diversity of population and thought, all of which attract unique people and families who choose to live here. Many of those people are our friends. We love it here. Chapel Hill just feels like home to us. It always has and always will.” Jim Kitchen 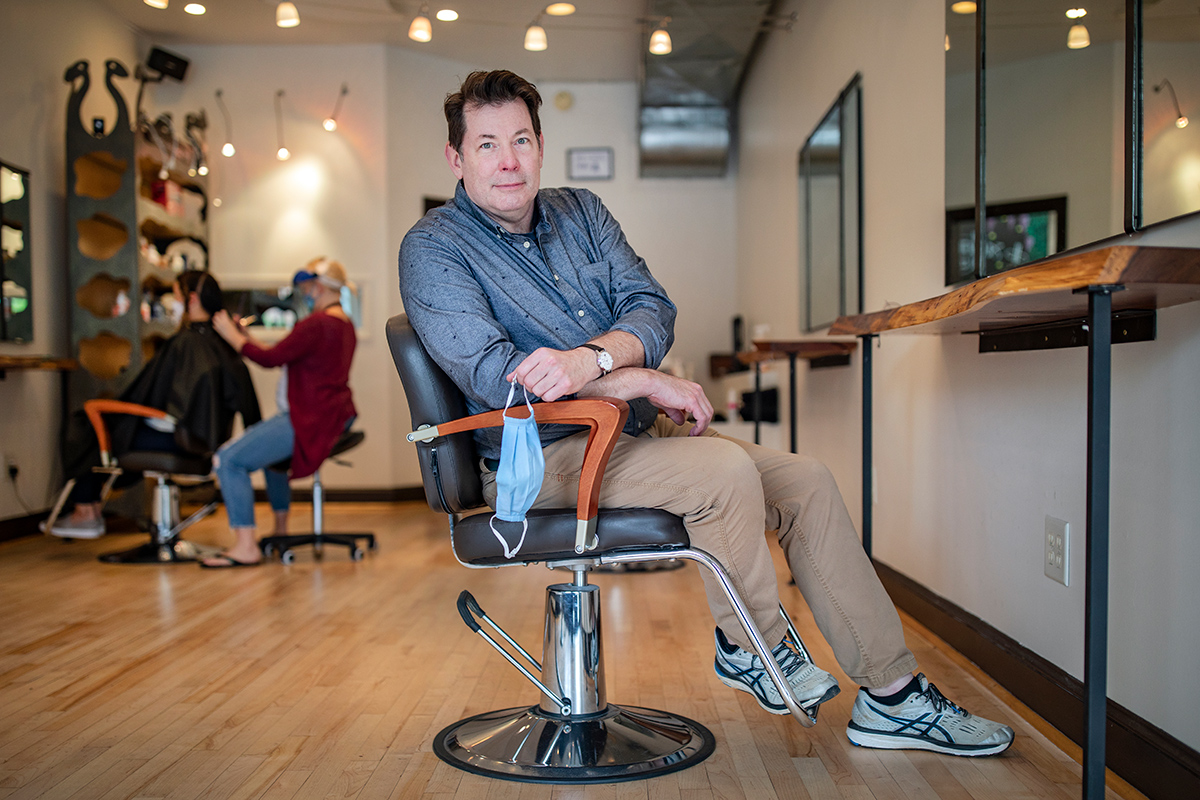 David Sutton ’92 arrived at Carolina as a part-time student and has become a Chapel Hill staple after opening the doors of his DB Sutton & Company hair salon in 1999. He has since bought the building on West Franklin Street and added a wine shop in the back of the salon.

“Chapel Hill has a great sense of community. It’s very warm and very inviting. Last year I was recognized by the town for being a leader for the LGBTQ community, which was great. It shows that you can be out and own a business and not be targeted. It’s really valuable to be in a community that is so exceptional and supports you like that.” David Sutton 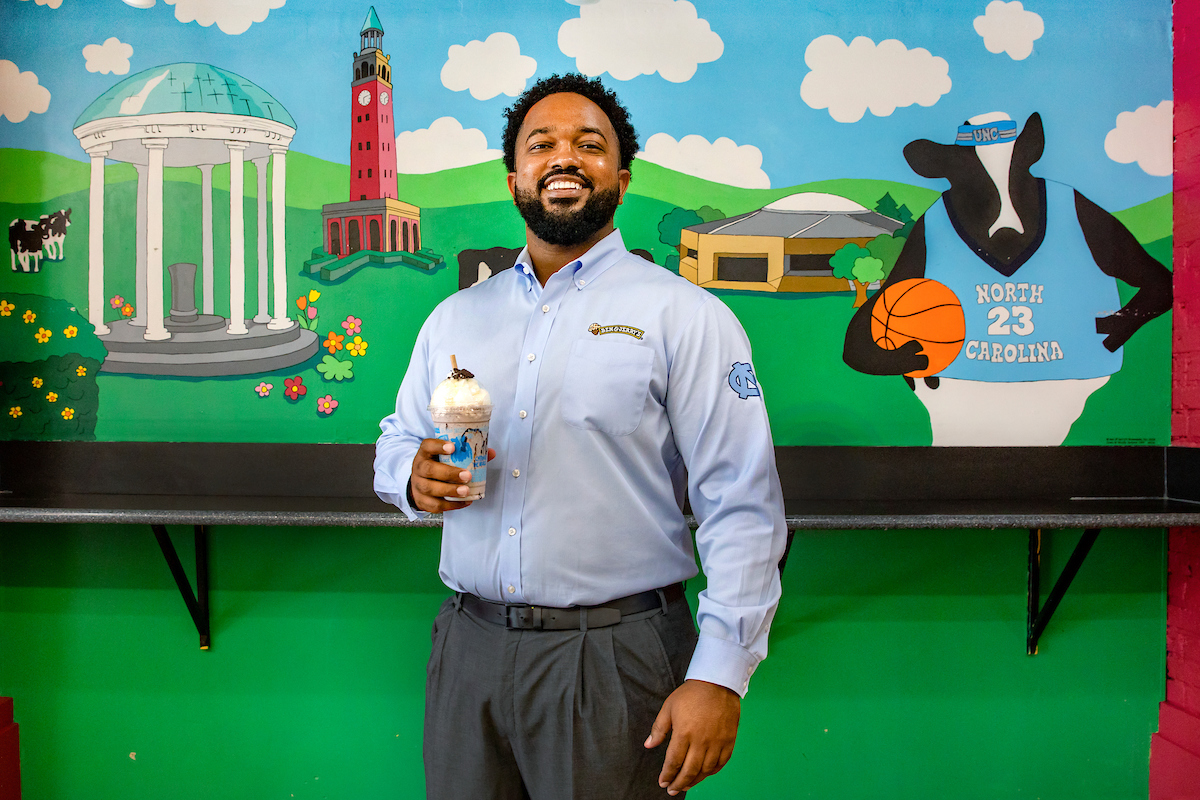 “I chose to open a business in Chapel Hill because, for me, it was the ideal place for a black entrepreneur to start and grow his career. I felt acceptance while I was in school at UNC. I was a country kid walking around with cornrows and a tie-dyed shirt, and I was able to purchase a business right before graduation. That told me that this was the type of environment where no matter my background or my skin color, folks saw work ethic as a great thing. That resonated with the town and made me want to raise my family here.” Antonio McBroom