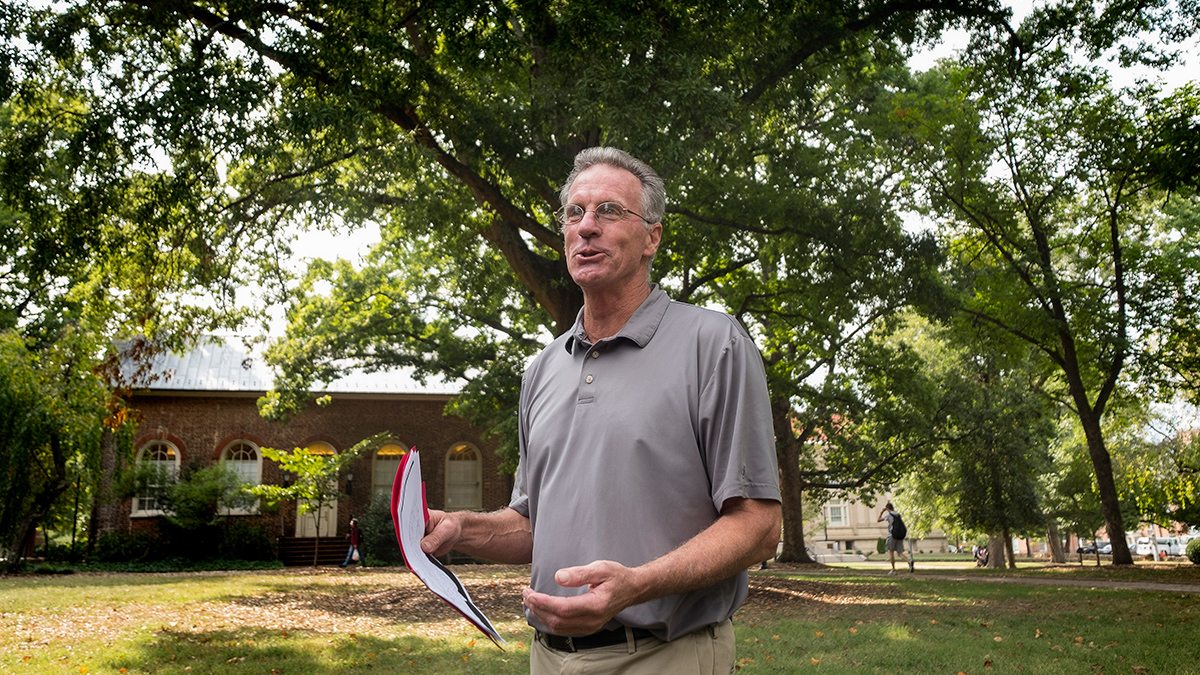 Don’t ask Tom Bythell to choose a favorite tree on the UNC-Chapel Hill campus. The University arborist and forest manager cares for Carolina’s trees as if they were his own children.

“Every tree has its own idiosyncrasies, and I know and love them all,” said Bythell. “Like children, some of the trees always wake up late but eventually flower, while others are the first to arrive.”

Bythell often walks around campus, assessing the health of trees. “I hold my breath when I turn corners, hoping that every tree is still thriving,” he said.

The trees and forests on campus and on the University’s outlying properties flourish thanks to Bythell. Responsible for more than 40,000 trees, Bythell also serves as the grounds liaison to capital projects and oversees a staff of 15 responsible for landscape pest management, grounds recycling, irrigation maintenance, water conservation, Carolina North Forest and parking lot landscape maintenance.

But Bythell’s impact far exceeds his job description. During his 22 years at Carolina, Bythell has introduced many innovations, including an air-spade technology for invigorating aging trees by loosening packed roots; a program for giving second life to downed campus trees; and a program for replanting shade trees using construction-impact fees. His walking tours are legendary. Bythell has even saved more than 15 campus beehives.

For his passion and commitment to the UNC-Chapel Hill campus, where trees are a defining feature, Bythell is one of six Carolina employees to win the 2020 C. Knox Massey Distinguished Service Awards.

“Tom is unwavering in his stewardship of the campus landscape — whether it is keeping the Davie Poplar and our historic trees alive, coming in at all hours to clear snow and ice from stairs and walkways or clearing the quad of downed limbs after hurricanes,” said Cecelia Moore, who retired as University historian last year. “When alums describe campus, they talk about the low stone walls, brick walkways and grassy quads. We have entrusted Tom with these symbols of Carolina.”

During his childhood in central New Jersey, Bythell spent many of his days in the woods, where he was especially drawn to trees. “I would climb them all the time, scaring the adults out of their minds,” he said. In high school art class, Bythell’s paintings and drawings inevitably featured trees.

As a teenager, Bythell decided he wanted to be a park ranger. “My plan was to wear a big, floppy hat and ride around on a horse telling people about trees,” he said.

With that goal in mind, he attended Penn State University, earning a forestry degree in 1980. “While I was in college, I realized that my idea of forestry was all wrong,” he said. “A forester is a tree harvester, whose main concern is ‘how much lumber and product can I get out of this acreage?’”

Bythell decided arboriculture was a better career match. “An arborist is a tree doctor who enjoys, loves and cares about the environment,” he said. “Our main goal is keeping trees healthy.”

Keeping trees healthy has been Bythell’s goal ever since. After graduation, he worked for the Young Adult Conservation Corps in parks throughout New Jersey. He then spent 16 years climbing, pruning and felling dying trees for two different New Jersey tree companies. In 1986, he became head arborist at Princeton University.

After nearly six years at Princeton, Bythell and his wife, Madelyn — fed up with New Jersey’s high cost of living, onerous property taxes and constant traffic — moved to the Triangle, where Bythell found work at a tree company and later a local retirement community.

When the job of UNC-Chapel Hill arborist and forest manager opened, Bythell jumped at the opportunity. More than two decades later, he holds the same title, though the job has expanded greatly.

When Bythell arrives at work, he never knows what the day will hold. He manages his maintenance crews, walks the campus often and updates the grounds department’s digital mapping program, which includes the location of historic trees, the campus irrigation systems and even active fire-ant mounds.

Caring for the trees is always at the forefront of his mind. He trains his crews to monitor the canopy. “I have 80 pairs of eyes out there, making sure that I know about any potential problems,” he said.

“There has always been an enormous connection between the campus and trees,” said Bythell. “When you think about the Davie Poplar — a symbol of the life of the University — every single student who has ever graduated from campus has somehow connected to that tree, walked by it or touched it. The fact that we could all experience the same living thing over a 230-year history is humbling to me.”

Bythell soon realized one of the biggest risks to Carolina’s trees came from the University’s own inevitable growth. In 2003, during a period of substantial building and renovation, then-chancellor James Moeser appointed Bythell co-chair of a task force on heritage trees and landscapes. Bythell pushed for the creation of a tree-protection program that requires every construction project on campus to include a plan for each tree it might impact. Since then, his counterparts at a dozen prominent universities have contacted him to ask, “how the hell I managed to do that,” Bythell said.

“Before we created this, we were losing trees all over the campus because of construction,” he said. Saving trees may add to construction costs, but those costs are worthwhile, “because it takes 100 years to grow a fantastic tree.”

When one of Carolina’s trees falls in a storm or dies of natural causes, that’s not the end, thanks to Bythell. In 2017, he began directing the fallen giants to the BeAM program, where students repurpose the wood into pens and other small items to give to University donors and others.

And last year, he collaborated with Michael Everhart, ’13, M.A. ’19, to create the Carolina TreeCycle program, which repurposes campus lumber — including an enormous post oak, older than the University, that fell two years ago — for use by the Carolina community. “The legacy of that tree is priceless, and the gorgeous lumber is worth tens of thousands of dollars,” Bythell said. “That can now become a special conference table or have another meaningful use.”

“Tom represents the purest ideals and aspirations we could possibly have in a public servant,” said Everhart. “He is committed to the mission of UNC in the truest sense — forgoing his personal interests for the betterment of the University — through his treatment of his employees, his colleagues, students and everyone else. We all appreciate the trees as they are alive, many of us barely noticing them as individuals, yet all of us benefiting from the grandeur and sense of place that they bring the campus.”

It’s especially touching that Bythell’s own daughter nominated her father for the Massey Award for the care he gives to Carolina’s trees. “I know that my father loves his work and that there is nowhere else he’d rather be,” said Abigail Bythell, ’17. “I personally know that our campus is one of the reasons I love UNC so much. Because of his work and enthusiasm for his job, my father is one of my greatest role models.”

“I am trying to make the campus beautiful not just for today’s staff, students and faculty but also for people who will be here 50 and 100 years from now,” Bythell said. “A tree can get pretty big in 50 years, which may seem like a lot to you and me but not to a college campus that’s well over 200 years old. I see UNC as a forever campus that is always going to be filled with trees.”