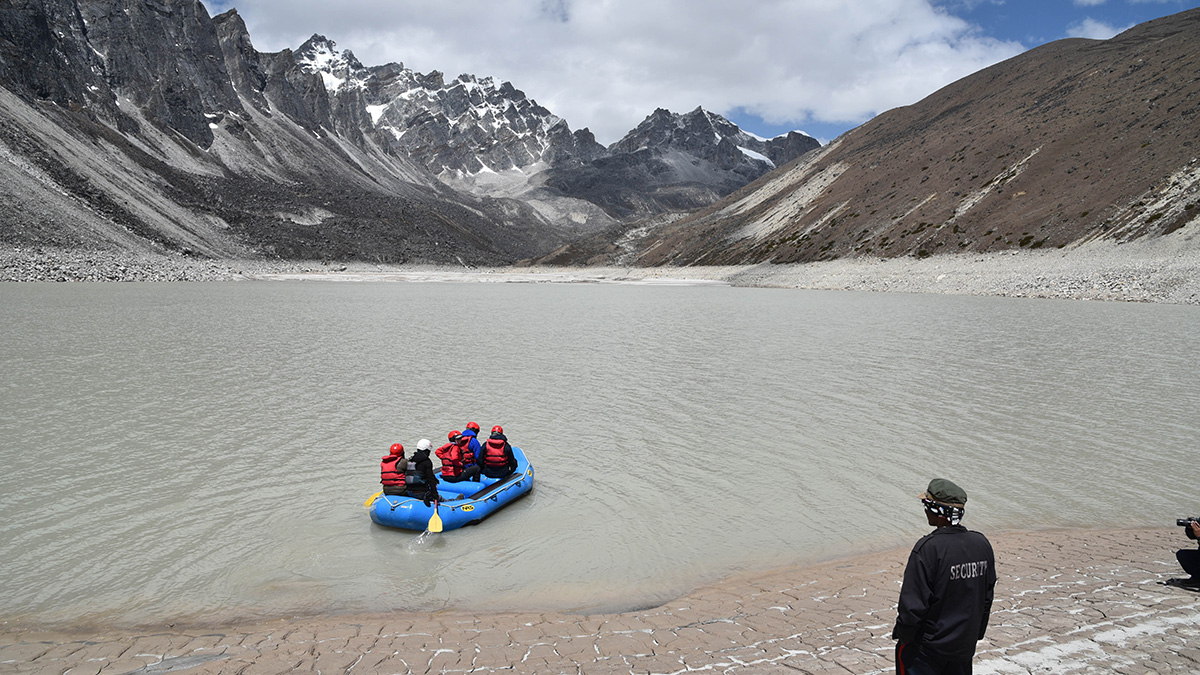 Mathematics department chair Rich McLaughlin begins the interview this way: “Let me give you the 20,000-foot view of this trip — the highlights and the headaches.”

It is an appropriate analogy, given that he has just returned from a spring 2018 trip to the Gokyo Lakes in Nepal, the highest freshwater lakes in the world at an elevation of about 15,000 feet. They are in Sagarmatha National Park, a protected area in the Himalayas that is dominated by Mount Everest.

It was an expedition two years in the making, when McLaughlin first ran into Lauren Leve, an associate professor of religious studies and an anthropologist, at a Carrboro restaurant. McLaughlin and Kenan Distinguished Professor of Mathematics Roberto Camassa, experts in fluid dynamics, were interested in studying the effects of climate change on pristine, high-altitude lakes. How are melting glaciers modifying the physical and biological properties of these lakes, which are sacred to the Buddhist tradition?

Leve, an expert in Himalayan Buddhism, has spent 28 years conducting research in Nepal. They started talking and agreed, “wouldn’t it be fun if we could work on a project together?”

They asked marine sciences professor Harvey Seim, whose fieldwork spans the North Carolina coast to the Galápagos, to join the team. They received financial support through the Fostering Interdisciplinary Research Explorations (FIRE) Grant. The awards program, funded by the Office of the Vice Chancellor for Research and the Institute for the Arts and Humanities, is now called the Arts and Humanities Research Grant.

“The airlines lost our instruments. We departed for the trek with only half of our scientific equipment. It was later found and delivered to us on the third day of the hike, but it was damaged,” McLaughlin said. “Then, to make things more interesting, even though we had acquired the scientific permits ahead of time, once we arrived there was a skirmish between the local municipality, the federal government and the national park. They could not agree about us taking a boat out on the lakes.”

McLaughlin was also battling knee problems, although cortisone shots, braces and hiking poles helped. In addition, he has a fear of heights yet had to cross six suspension bridges about 1,000 feet high to reach the group’s final destination. (Fans of Indiana Jones’ bridge battle in the Temple of Doom may appreciate the mental picture this conjures.)

After the team returned to the United States, they had to wait two weeks for two bags — containing important scientific equipment and water samples — to clear customs.

A scientific and spiritual expedition

After leaving Raleigh-Durham International Airport, four flights, 40 hours and almost 8,000 miles later, the Carolina team arrived at Tenzing-Hillary Airport in Lukla, by way of Kathmandu. The tiny airport in eastern Nepal is named for Sir Edmund Hillary and Sherpa guide Tenzing Norgay, who were the first to summit Mount Everest. It is the point where most people begin the climb to Mount Everest Base Camp, and it was the starting point for the team’s trek. Condé Nast Travelercalled it one of the most dangerous airports in the world due to its short runway and steep dropoff, high elevation at nearly 9,500 feet, and unpredictable winds and weather.

Accompanied by a national park apprentice, Sherpas and guides, it took them six days (including one day of rest/acclimation) to hike to the Gokyo Lakes, at a pace of about 10 miles per day. In addition to supplies and scientific equipment, they lugged a large inflatable raft they hoped to float on the lakes. There are six main lakes, and the UNC team planned to study three of them.

The Himalayas serve as the source of drinking water for 800 million people, and that statistic hit home for Seim. The Gokyo Lakes are also an internationally recognized Ramsar Site by UNESCO, meaning they are protected wetlands for waterfowl.

“The Gokyo Lakes lie next to the Ngozumba glacier, the largest glacier in Nepal, yet it’s unclear whether they are fed by that glacier,” said Seim, who faced bouts of altitude sickness during the trip. “So one of the biggest questions we were trying to understand is the lakes’ water source.”

As the glaciers melt, they can create glacial lake outburst floods or GLOFs, one of the most hazardous impacts of climate change, and that can cause flooding of settlements downstream.

Understanding what’s happening in this one remote corner of the world can offer lessons for global warming in other places, Camassa said.

“It’s like a fast-forward movie of what’s happening with climate change everywhere,” he said.

The lakes are also extremely important to the Buddhist faith.

Leve laid the groundwork for interviewing local people about their understanding of the impacts of climate change. She also became a critical cultural translator when the group ran into major roadblocks days into the research expedition. Negotiating with the competing parties involved in granting research permissions fell right in line with her research, which looks at religion as a window into understanding cultural change.

The Khumbu region, where the Gokyo Lakes lie, is the ancestral home of the Sherpa people, who are known for their Buddhist piety (as well as their skill as mountain guides). For Himalayan Buddhists, the physical environment is occupied by a variety of supernatural creatures who inhabit the natural landscape and protect the people. Their presence renders the earth itself sacred, and the particular sites where they live, like mountains and lakes, are carefully protected.

“Purity is very important there,” Leve said. “While putting a boat on the lake was not seen as actively immoral, it was certainly not traditional behavior. We were asking to do something that required bringing the secular and scientific into a very sacred domain.”

To add to the complexity of the issue, Nepal is also undergoing a political transformation to a more democratic form of government — and local people are being encouraged to exercise their indigenous rights.

“The fact that local people were actually demanding to be at the table and have their values respected was a good thing,” she said. “It’s a conversation that needs to be happening.”

After some intense discussions, the researchers were allowed to do research on lakes 2, 3 and 4, but they agreed not to take a boat on lake 3, the holiest of the lakes. Before they went out on two of the lakes, they performed a Buddhist ceremony (puja), where they asked the resident deities for forgiveness for infringing on the sacred space and promised that their intentions were good.

“It was a very scientific journey, but it became very spiritual, too,” McLaughlin said. “It was eye-opening and humbling.”

Continue reading on the College of Arts & Sciences website.