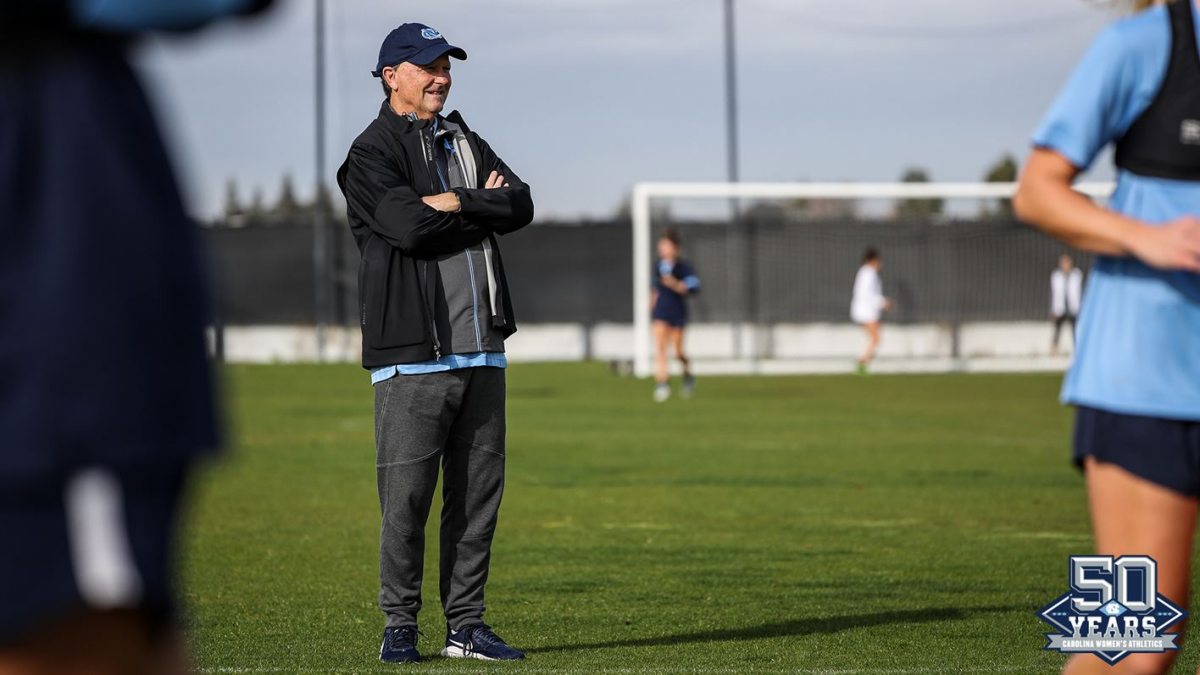 Nothing in life is preordained. That something is fated to be simply is not the case in most instances. For the Carolina Women’s Soccer program, there has, over time, been a series of right place, right time events – and people — that landed the program where it is in 2021 as one of the most prodigious dynasties in the history of college athletics as we celebrate 50 years of women’s sports at Carolina.

Since women’s soccer became the 13th sport added to the Athletics program in 1979-80, its history is filled with first names that don’t need last names as identifiers.

But before any of those, there was Albert. Or as he is better known: Anson. Anson Dorrance. The leader and legend who has led Carolina to 21 NCAA titles and one AIAW championship, 24 regular season ACC championships, 22 ACC Tournament crowns, and coached 26 national player of the year selections. The legend who has taken the Tar Heels to every single one of the 39 NCAA tournaments held since NCAA sponsorship began in 1982.

“Carolina was definitely my first choice coming out of high school in New Jersey; so much of that was the knowledge of what Dorrance had built here and with the national team when he coached it,” said Heather O’Reilly, one of the 19 different players of the year to play at Carolina for Dorrance. After a long national team and professional career, she returned to join the Carolina coaching staff in 2019.  “What we enjoy about the history of women’s soccer today in this country was centered on the foundation he built at Carolina and with the USWNT in the 1980s.  His impact is undeniable.”

The credit for Carolina Women’s Soccer’s incredible success, of course, goes to the student-athletes who competed here. But it also could never have happened without the brilliance and dedication of Dorrance.

Albert Anson Dorrance IV was born April 9, 1951, in Bombay, India, the son of an international businessman. As a youngster, he lived in India, Kenya, Ethiopia, Singapore, Belgium and Switzerland.

In 1969 when Dorrance finished his prep school studies at Villa St. Jean International School in Fribourg, Switzerland, his eventual presence in Chapel Hill was in no way guaranteed. The last remaining all-boys boarding school in the country was just a year away from closing, and Dorrance looked forward to college in the United States. But he was rejected by Bowdoin, by Dartmouth and by Wesleyan, his top three choices. If those schools had not rejected Dorrance, he may not have come to Chapel Hill. He might have ended up as a Polar Bear instead of a Tar Heel.

Dorrance ended up at his backup school, Saint Mary’s University of San Antonio, Texas. Saint Mary’s had a connection to Villa St. Jean as both schools were founded by the Marianist order of the Roman Catholic Church.

Dorrance arrived at Saint Mary’s in the fall of 1969, but his personality and the Texas culture were akin to gasoline and water.  With help, he said, from a pair of prominent UNC-Chapel Hill alumni, he gained a transfer spot at Carolina beginning in the spring semester of 1970.

It was a match made in heaven. Dorrance was assigned to Teague Dorm, and he immediately fell in with its legendary intramural sports dynasty on campus. He played virtually every sport for the dorm and also played for the Carolina club rugby team, and his on-campus profile as a dominant athletic presence was quickly cemented. As a transfer, he red-shirted in varsity soccer in 1970-71 alongside long-time coaching compatriot Bill Palladino. A year later, he was on the varsity squad and won All-Atlantic Coast Conference decoration before graduating in the spring of 1974.

Although he never ended up leaving Chapel Hill, a career in coaching was never in the cards at that juncture. The summer after he graduated, he married his childhood sweetheart, M’Liss Gary, an accomplished dancer whom he had met in the second grade when they both lived in Addis Ababa, Ethiopia. He still recalls getting one of the two academic awards he ever received in his life from the hand of Emperor Haile Selassie during his youth in the Ethiopian capital.

He and M’Liss are now just three years short of their 50th anniversary. But the early years of marriage never included a hint of coaching legendary status. M’Liss taught dance. Dorrance went to work for Tar Heel soccer colleague Kip Ward’s Rainbow Soccer program and Loom Press. He eventually went to work for Fidelity Union Life Insurance Company before enrolling at the North Carolina Central University School of Law in the fall of 1976.

That year, Bill Cobey was hired as the athletic director at Carolina. Dr. Marvin Allen had announced his retirement as the men’s soccer coach after nearly a quarter-century at the helm of the program. Allen had coached Dorrance at Carolina, and the plan was to have a coach in place in the fall of 1976, working alongside Allen and ready to take over the following season. Dorrance conjectures there might have been a vetting mistake that year, but regardless, Cobey chose Dorrance. That’s when his coaching resume, completely barren at that point, got its first bullet point.

Dorrance continued his law school studies at Carolina and coached the Tar Heel men beginning in 1977.  Over 12 seasons, he led the men to 172 victories before handing over the program following the 1988 campaign. In the meantime, the women’s soccer club on campus had petitioned Cobey to become Carolina’s 13th varsity sport for women. In the spring of 1979, Cobey asked Dorrance to attend a soccer club practice on the AstroTurf facility at Navy Field. He wanted Dorrance’s advice. Should women’s soccer go varsity? Would Dorrance coach them? Cobey had already likely made up his mind, but Dorrance was impressed enough with what he saw that he said yes. A few months later, he became a two-sport head coach and was elevated from a part-time University employee to full-time status.

“I was still attending law school at the time, and in the back of my mind, I think that was still my goal. But M’Liss quickly picked up on where my interests were headed,” Dorrance recalls. “Coaching both teams became a labor of love, and then by 1986, I took on duties as the women’s national team coach, which I loved doing for the following eight years.  When I look back, it was a tremendous era of growth for the sport, and I take great pride in the fact UNC was in the middle of all that growth both for us and for the national team.”

He continued to attend law school and coach two varsity sports, but soon M’Liss knew that his heart lay with the latter pursuit. They started a family that year, as well, with the arrival of Michelle — and life for the Dorrance clan has never slowed down. Natalie arrived two years later and then Donovan. The family is Chapel Hill through and through.

Dorrance hit the ground running as a coach and spent much of his life on the road recruiting. His first big recruit was Janet Rayfield out of Dallas, and by 1981 Carolina had won the first-ever Association for Women’s Athletics national title, finishing 23-0. A year later, Carolina won the first of its 21 NCAA titles.

What serendipity this has been. We’ve been the lucky recipients of the largesse of this serendipity. The names we’ve learned. The moments we’ve experienced. The soccer we’ve witnessed.

In 2019, Carolina opened a new facility named in his honor to make even more moments Dorrance Field — for the field sports Tar Heel fans love — in part because of this history Dorrance’s teams have made. Ironically, Carolina recently played at Illinois, where Rayfield has been the long-time head coach and helped open a new facility for the Fighting Illini program. She is just one member of an incredible coaching tree.

And one of the many names etched into the history of Tar Heel women’s soccer — and 50 years of women’s sports at Carolina.

And, of course, Anson.