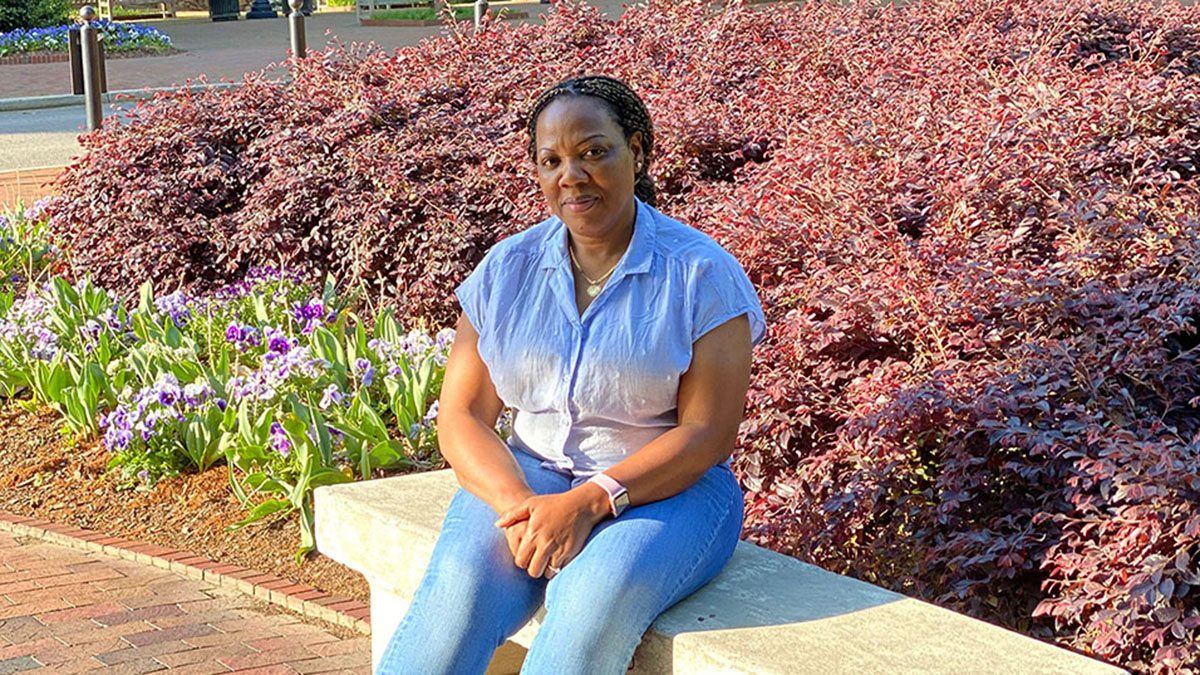 Dirt clung to the girl’s feet as she untied four goats and led them out to graze.

She looked for an orange or a sugar cane stalk to silence her grumbling stomach before starting other chores.

For 10-year-old Carol Womack, a full day’s work on her family’s farm in central Jamaica lay ahead. She also fed pigs and picked cacao and coffee beans ─ hard work ─ but Womack thinks of those days as a “pot of gold” compared to what was to come.

What came began with a revelation — the woman raising her was not her mother but rather her aunt. Her birth mother, Womack learned, lived in Kingston, Jamaica’s capital, and she soon forced her young daughter to leave the only life she’d known to join her and seven other children in the bustling city. The days there were troubled and, as her mother’s least favorite child, she longed to escape.

Before following Womack’s path, let’s see where she is today.

Routine tasks and emergencies in 26 buildings

Womack, a day porter in Carolina’s Housekeeping Services, combines her farm-instilled work ethic with a smile that shines on everyone in the 26 buildings she cleans every day.

Those buildings vary widely in uses, from Davie Hall’s classrooms and faculty offices to Alumni Hall’s Research Labs in Archaeology to Ackland Art Museum’s galleries. Womack’s days include routine tasks, but she devotes much of her time to emergencies, such as spills, flooding and tight turnarounds on multi-use rooms.

Womack came to the University in 2005 after a former Nordstrom co-worker who worked in Carolina’s housing department suggested she apply for an open position. Soon, she was cleaning residence halls at Carolina.

“We worked in Odum Village with no elevator,” Womack recalled. “I carried my bucket and all my cleaning supplies up and down those stairs; even had my lunch bag, too. They called me ‘the bag lady.’”

Womack didn’t shy from hard work, which intensified each summer when she and co-workers cleaned thousands of dorm rooms. At that time, Womack began a second job ─ one she still has ─ as a night housekeeper with the Environmental Protection Agency.

“Carol does a wonderful job,” Thompson said. “She talks really fast, so you might have to ask her to slow down, and she learns really fast. She’s a team player.”

Not ‘saving puppies from a burning house’

People notice Womack’s consistency in work and friendliness. She rarely, if ever, misses work, even when snow and ice arrive. Splashier jobs can overshadow such a humble attitude and response to the daily grind.

“I wish I had a story of Carol saving puppies from a burning house or something dramatic, but quite simply, she is a dedicated, hardworking person who enjoys her work,” wrote Housekeeping Services Director Herb Richmond in his Massey nomination.

Richmond said that he has “no better shining example than” Womack of someone who makes the work environment better through friendliness to everyone that she encounters, no matter the circumstance.

Part of a team

Even on the toughest, do-it-now jobs, Womack does not complain. Well, maybe one slightly ironic complaint: She tells managers not to pair her with somebody who complains about hard work.

Still, Womack knows she is part of a team, the Zone 23 team. “I share Ackland with Wanda, and if we need help there or anywhere, we can call the crew leader Corey [Parker] or other people,” Womack said. “Most of the time, if it is something I can take care of by myself, I just do that.”

Womack prefers to stay ahead of calls for special cleaning. “Building managers ─ I don’t wait till they call me. I like it when they see me and say, ‘You did a beautiful job today.’” Code-red calls do come, though.

“There are times, like a 3 o’clock event in Hill Hall, when someone will call at 1:40 to ask me to get it cleaned and ready after another group was in there.”

And, at day’s end she prepares supplies and laundry for night-shift housekeepers.

Womack’s pragmatism helps: Cleaning is necessary because dirt, whether it’s in an art gallery, a busy bathroom or a grimy front-door sidewalk, is always there. “I never look at it as not pleasant, you know,” Womack said. “It is something I know I have to do. It’s like job security.”

Womack is not a big emailer. In fact, the Massey Award notification message sat in her inbox for two days before she opened it.

She said she had heard of the awards, but she didn’t fully understand what winning meant until she showed the message to husband Shawn Womack, an assistant director in Housekeeping Services.

“I never win nothing in my life,” she said. “I called Shawn because I was not sure what it was, and he told me to calm down. He was in a meeting, so I had to wait until he picked me up from my second job to talk. I couldn’t believe it. It was like being in a dream and waiting to wake up.”

Now, we can look at her path from that farm to Carolina.

Womack said the farm “was poverty, but better than living in Kingston. We can grow everything we needed. We killed chickens, goats, pigs. That was my life. I didn’t know anything different.”

That changed when she joined her mother. Womack describes her time in Kingston as “a hard struggle.” And she longed to escape. Womack learned that her father, whom she’d never met, lived in America. She contacted him, and he sent money to her and a sister, Angela.

Her father’s care and support led her at age 27 to get a temporary U.S. Visa to attend his funeral. She stayed to work in New York City, where she met Shawn. The two married and, in 2001, moved to the Triangle. Womack earned U.S. citizenship in 2009. Her path from the farm stopped in Mebane, where the couple bought a house in 2017.

“I feel like I accomplished so much here,” said Womack, who has four adult children. “I learned to be humble and grateful. I don’t have a great education, and I’m not a leader, but with my husband, I feel stronger.

“I come from the farm, and this work is easier,” she said. “Don’t get me wrong. It’s hard work, but because of how I was raised, where we were so tired and struggled, this is nothing compared to where I come from. I don’t take nothing for granted.

“A lot happened to that little girl,” Womack continued. “My aunt was strict but that was a pot of gold compared to living with my mom.”

Co-workers say that doing a great job is most important to Womack, but she clearly appreciates when people acknowledge her work. “The bottom line,” Womack said, “is that people will say ‘Carol, that’s a good job. Thank you very much.’”

With no hint of bragging, Womack said, “My work speaks for itself, and I guess that’s what people are seeing. I love it here. I love most of the people and, yes, I’m smiling. I always have a good eye for when I can offer to help people.”

At the Ackland Art Museum, for instance, 14 employees echoed other nominators with phrases such as “pleasant and professional,” “dedicated,” “rigorously working,” “cheerful,” “beautiful personality” and, specifically, “her attention to detail is vital to the museum.”

From the Research Labs in Archaeology at Alumni Hall, Administrative Manager Lisa-Jean Michienzi wrote, “In a field that deals with a lot of dirt (literally), it is always reassuring to know that Carol keeps our labs spotless so we are ready for teaching and research.”

In Abernethy Hall, Carolina Latinx Center Director Josmell Perez said, “(Carol) has gone above and beyond to make us feel welcomed and keep our spaces clean. Especially with the number of students that come through our doors, it is hard to keep up, and Carol does it with a smile.”

Program Assistant Da’Vianna Nelson added. “In a day and age where people are preoccupied with their troubles and worries, Carol is never too preoccupied to see outside of herself. I don’t know a more hard-working and deserving person.”

Those people and hundreds of others along Womack’s daily path now celebrate the part she plays in their lives.