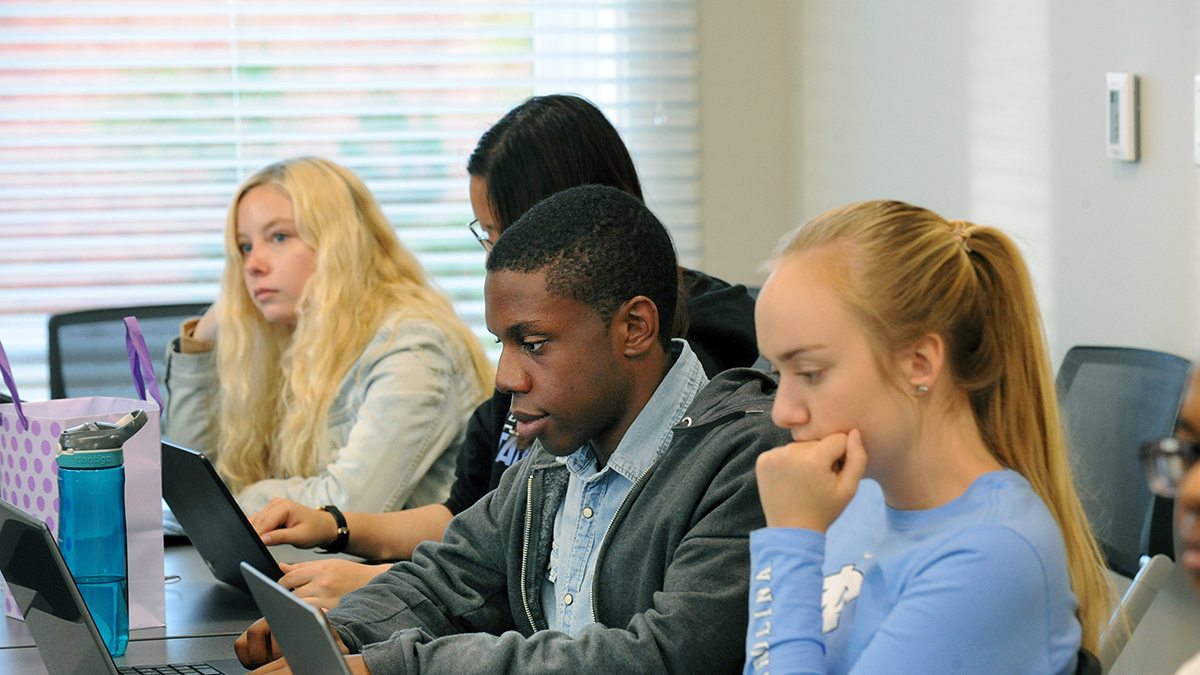 Junior Lizzie Wilson found the perfect fit for her love of undergraduate research and service in a UNC-Chapel Hill organization that disseminates online mental health resources vetted by experts to the people who most need help.

Through the student club and nonprofit Helping Give Away Psychological Science, 50 students, including Wilson, have produced 500 pages of content — most of it available via the open-access platform Wikiversity. The content has accumulated 60.4 million page views in just 2½ years.

HGAPS projects have included creating “psychological first aid” resources for students and parents after the Parkland, Florida, school shootings. The Wikiversity page on dealing with a school shooting tackles topics and offers resources, noting for example, the signs to look for one week and one month after a traumatic event.

The students created  “What We Wish They Knew: 13 Reasons Why” in response to the complex themes of suicide, cyberbullying, sexual assault, substance use, grief and more raised in the popular Netflix show “13 Reasons Why.”

“I feel like I’m making an impact that’s more than local; it’s really global. I’ve come to realize that there’s no other club that I could have joined where I could do more,” said Wilson, a psychology and biology major also pursuing a chemistry minor. “Real people are accessing the information and getting help from the content we are producing.”

HGAPS grew out of the research lab of Eric Youngstrom, a professor of psychology and neuroscience in the College of Arts & Sciences who has always had a passion for “bringing scholarly knowledge to the people.”

Youngstrom co-founded the club with one of his graduate students, Mian-Li Ong, who is now participating in a predoctoral clinical internship in San Antonio. In September, Ong received a Citizen Psychologist Presidential Citation from the American Psychological Association for his work with HGAPS. The organization has received eight grants from professional societies and foundations to support its work.

Under the guidance of Youngstrom, students meet weekly over pizza in Davie Hall to work on projects, edit content and produce infographics. They typically host two larger “edit-a-thons” during the year, sometimes Skyping with outside experts.

They partnered with one of Youngstrom’s UNC System colleagues — Kurt Michael, the Aeschleman Distinguished Professor of Psychology at Appalachian State University and an expert on suicide prevention — to  develop the Wikiversity resources for “13 Reasons Why.” Carolina students are also helping Michael and his students develop an HGAPS chapter at App State.

“Western North Carolina has higher than average rates for suicide, and this was an opportunity to join forces to disseminate more accurate information,” Michael said. “Even though we are 180 miles apart, we share a lot of commonality in terms of our desire to have an impact on society. And students realize that their research can make a difference immediately.”

Carolina senior Emma Choplin worked closely on the “13 Reasons Why” page. She received a grant from HGAPS to attend the American Psychological Association convention in San Francisco in August, where she and other Carolina students met with Helen Hsu, a Stanford University psychologist who consults with the show.

“This experience has helped me to develop a better understanding of research, and professionally, I’ve learned business and entrepreneurial skills, too,” said Choplin, who is majoring in psychology and pursuing minors in neuroscience and religious studies.

The team responded quickly to develop infographics and other resources that could be used before and after Hurricane Florence. The infographics covered tips about how to help kids who are scared of storms and how to cope with issues such as post-traumatic stress, loss, grief and depression after a hurricane.

This opportunity to focus on applied research has been very appealing to Hannah Kim, a Carolina psychology and economics major who is also a Buckley Public Service Scholar.

“Hurricane Florence was so local and hit close to home for a lot of people,” Kim said. “People on our team are passionate about helping people get the best information they can.”