With thousands of Tar Heels in every major traveling the globe through study abroad every year, Carolina is fulfilling its Global Guarantee — our promise that a global education is promised to all our students.

This summer, study abroad was back in full force and sending Tar Heels across the world to experience new cultures and languages and encounter new ideas, situations and people. Ander Naugle, Seka Shahriar and Hannah Stroot were among the students who spent the summer overseas to take courses in Dublin, Ireland; San Pedro, Costa Rica; and Seoul, South Korea.

Continue reading about their summer experiences and what they learned through study abroad.

Sophomore Ander Naugle has traveled internationally before, but his study abroad experience in Dublin, Ireland, this summer provided the opportunity for him to explore a different side of his heritage.

Naugle, a biology major and chemistry and marine science minor wanted to take his required organic chemistry course during the summer once he learned that the course would be taught in Dublin, allowing him to explore the Irish heritage on his father’s side of the family. 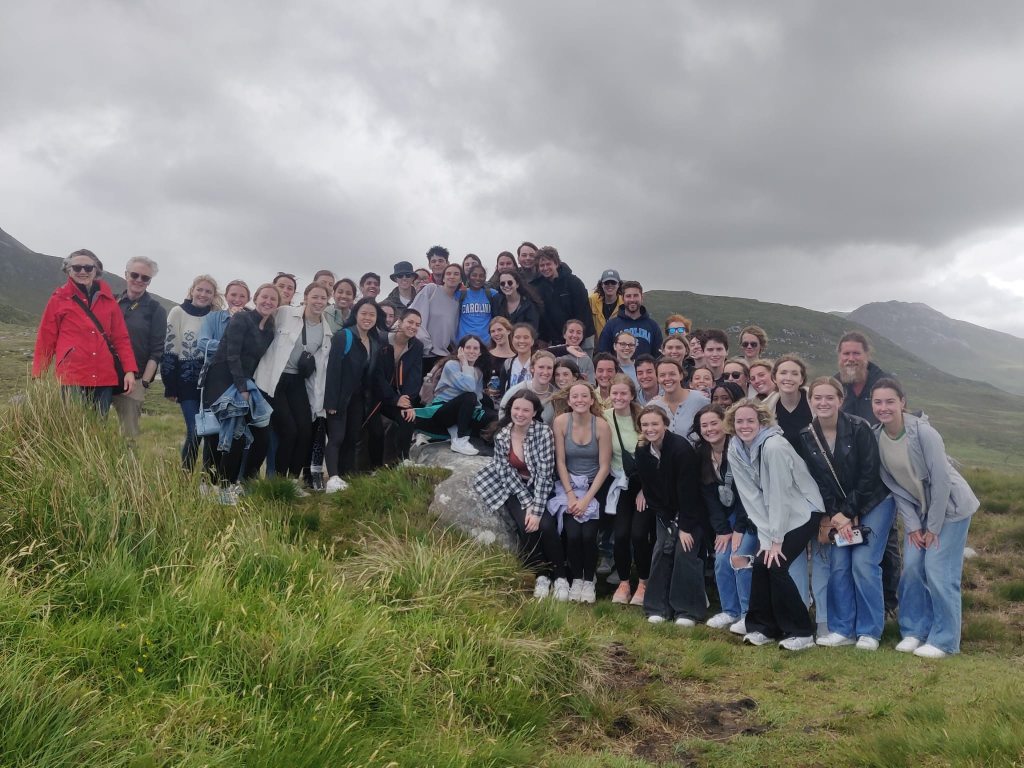 Naugle with his classmates in the Wicklow Mountains in Ireland. (Photo courtesy of Ander Naugle)

“I’m Hispanic, and I’ve grown up with my mother’s Venezuelan heritage, but I never thought I could identify with the heritage from both sides of my family,” Naugle says. “Dublin allowed me to realize that identity isn’t just your most recent heritage, but also all of your ancestors combined, no matter how far back they are in history.” 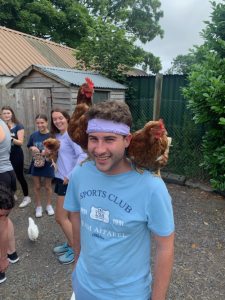 Naugle posing with some feathered friends on an Irish farm. (Photo courtesy of Ander Naugle)

During his time in Ireland, Naugle went cliff-diving, hiked through the Wicklow Mountains, saw the Giant’s Causeway and visited a rural farm — a highlight for the aspiring veterinarian.

Naugle also took a Celtic mythology course that covered the history of Ireland, the culture of the island and the legends of Celtic gods and fairies, like the well-known leprechauns.

“We had a limited time there and could only see so much between classes but taking a Celtic mythology course contextualized what we were seeing in museums and made it feel like I left Ireland with a better understanding of the culture and my family history,” Naugle says.

After finishing his courses in Dublin, Naugle solo backpacked through Spain, Portugal, France, Italy, Switzerland and Morocco, which encouraged him to explore the world by studying abroad again in the future.

“I started looking at next year’s study abroad application about four days after I got back from Europe,” Naugle says. “I’m thinking about Australia because they have some great veterinary courses over there, and I really want to explore the biodiversity of Oceania.”

Even before Seka Shahriar came to Carolina, she knew she wanted study abroad to be part of her college experience.

“I feel lucky because I got an email about a course, ‘Spanish for the Medical Profession,’ that was being taught in Costa Rica, and it was just a perfect combination of things I wanted to experience,” Shahriar says. “I’m a biology major, and I’d like to go into teaching or practicing medicine after graduation. I’m bilingual and working on Spanish as my third language as well.”

During her time in Central America, Shahriar stayed with a host family, which improved her Spanish vocabulary and exposed her to more nuanced aspects of the culture. 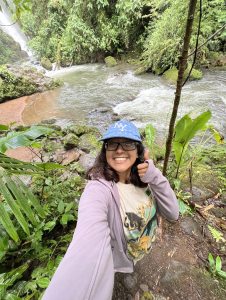 “We stayed in a beautiful little house, and our host family made us breakfast and dinner every day from scratch, and they didn’t speak a lot of English, so we practiced our Spanish constantly,” Shahriar says. “I got to try new foods, such as arepa pancakes, gallo pinto and maduros, and we met their whole family who took us under their wing.”

When Shahriar wasn’t working on her Spanish and Latin American literature courses, she and her fellow students explored the natural beauty of the country. They soaked in hot springs fueled by a volcano, toured a coffee plantation, hiked up waterfalls and saw monkeys, sloths and hermit crabs on the beach.

Shahriar says she would recommend studying abroad to every college student, especially if they’re learning a new language.

“I can’t tell you how quickly my Spanish progressed while I was in Costa Rica and how much living with a Spanish-speaking family improved my pronunciation,” Shahriar says. “Or if you’re just a person who’s naturally curious, you can experience something totally new for the first time and meet people who are different from you but so similar in many ways.”

Senior Hannah Stroot has wanted to study abroad since her first year at Carolina, and after years of the COVID-19 pandemic limiting her options, she spent this summer in Seoul, South Korea, studying law and East Asian philosophy.

Stroot, an economics and public policy major and geography minor, finished almost all of her prerequisites prior to her senior year and wanted to take courses abroad that she didn’t have time for during the academic year.

“The law class I took utilized mock trials to teach the material, which is something I never experienced in my major requirements, and the philosophy class also taught me about the context of the culture I was immersed in,” Stroot says. “I’m more of a math person, so it was academically challenging and a nice break from my usual studies.” 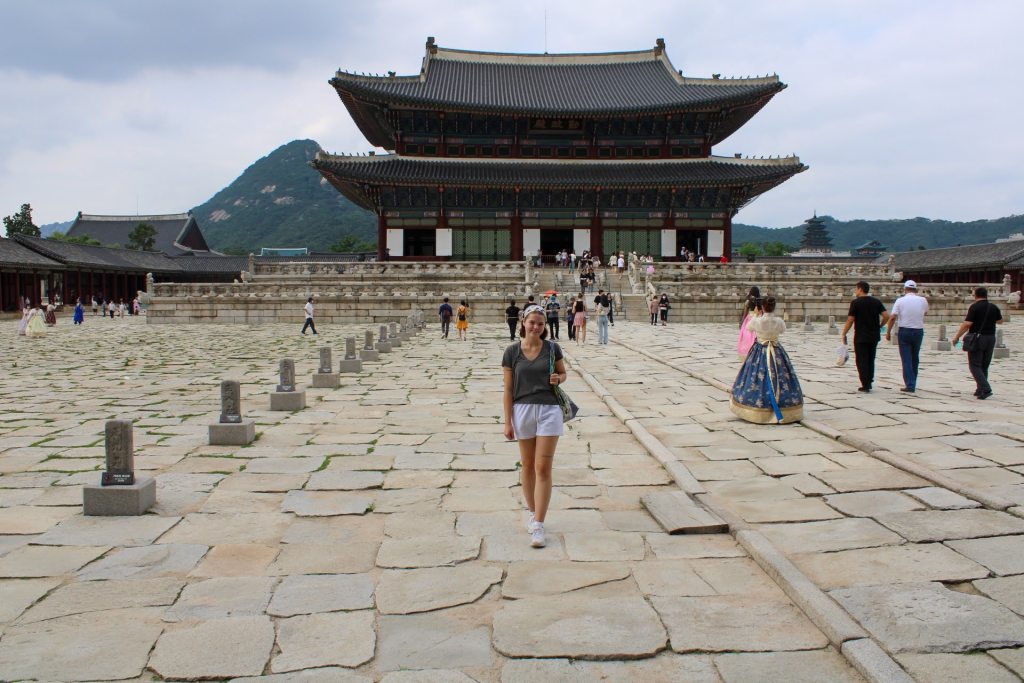 Stroot made use of every weekend in South Korea to explore the country’s diverse landscape and dive into the culture. She and her roommates visited Jeju Island to hike the tallest peak in South Korea, tour some of the world’s largest lava tubes, and taste Jeju’s famous Hallabong tangerines. Stroot also participated in the Boryeong Mud Festival, where she learned about the role Korean coastal mudflats play in biodiversity preservation, water purification, carbon sequestration, and erosion prevention.

“Study abroad was a big growth experience for me because there was a language barrier I learned to navigate, I was a minority for the first time in my life, and the social culture is very different,” Stroot says. “It’s a time to learn that it’s okay to feel uncomfortable. I think in all my time as an undergraduate, study abroad really prepared me for life after college.”