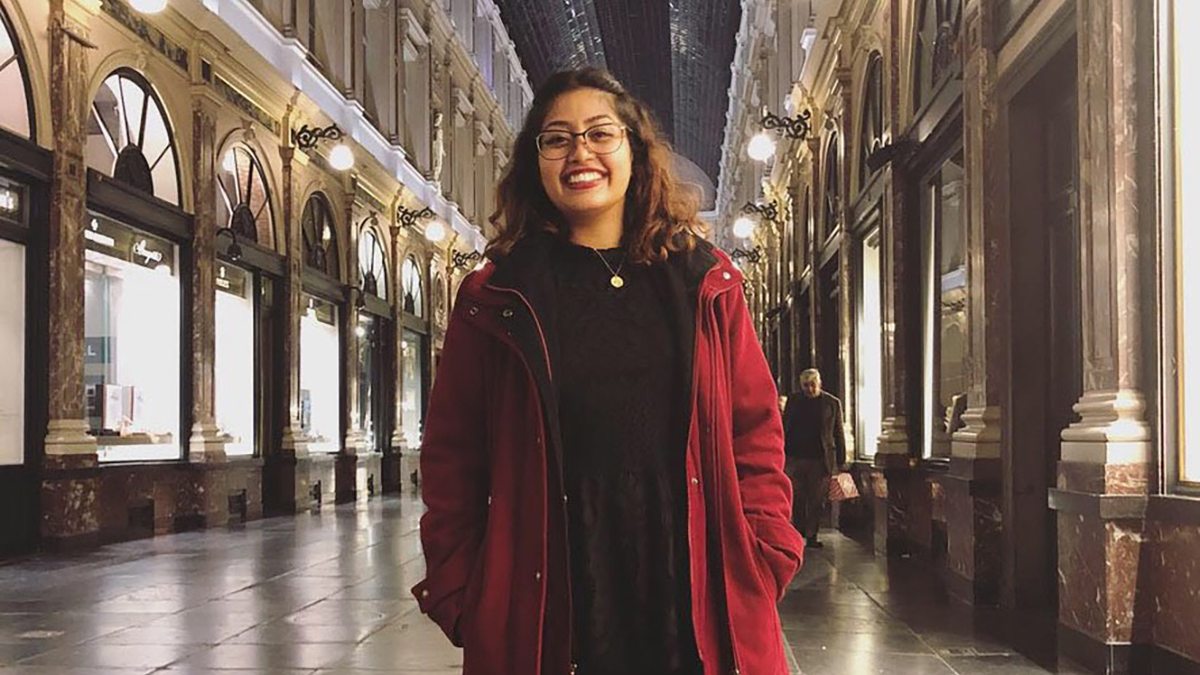 To say that Sweta Karlekar’s four years at Carolina have been packed is an understatement. She had internships at Disney, Yelp and Facebook. She was a part of Google’s AI Research Mentorship Program. She presented her research at international and domestic conferences. She spent a semester in Silicon Valley.

Still, despite the amazing experiences, one of the things she said she’ll miss the most is a familiar routine.

“I’ll miss that feeling of walking out of Davis Library at 2 a.m. with your friends, feeling that sense of accomplishment after studying for hours — and being on a campus that echoes that back to you,” said Karlekar, a senior computer science major and entrepreneurship minor.

The Ashburn, Virginia, native came to UNC-Chapel Hill as a Chancellor’s Science Scholar. It became an integral part of her Carolina experience from day one.

“It’s the reason I came to UNC. Just meeting the scholars and the caliber of people in the program — they have been supportive of me the entire time,” she said. “Coming in as an out-of-state student, it made campus feel smaller.”

Karlekar got involved with undergraduate research early on; during her first year she applied for a position with the UNC School of Education working on developing science visualizations for children. During her sophomore year, she reached out to Mohit Bansal, assistant professor of computer science, and began diving into natural language processing and artificial intelligence research. She became very interested in the idea of applying artificial intelligence to improve people’s lives. She examined how to use AI to find linguistics characteristics in the speech of Alzheimer’s patients.

“Research gave me the chance to prove myself in ways I never would have imagined; it allowed for freedom, creativity and mobility,” she said. “It’s an amazing opportunity to tell other people your idea, communicate, work in teams and develop something that is truly yours.”

Through working in Bansal’s lab, she got to present research at a conference in New Orleans, and it was there that she met an employee at Disney and learned about the company’s efforts to combat cyberbullying. That conversation eventually led to an interesting twist in her academic journey.

So Karlekar made the difficult decision to drop out of Carolina for the fall semester and headed to Seattle to work for Disney. She then reapplied, came back to campus for about a week in the spring of her junior year, then left for the Silicon Valley semester through the Shuford Program in Entrepreneurship and Honors Carolina, completing an internship at Yelp. She stayed on in San Francisco through the summer and interned at Facebook, working on AI for recruiting.

She has spent her senior year on campus at Carolina, and she’ll go to work for Facebook as a software engineer after graduation.

Because she spent an entire year away from Carolina, Karlekar said she has been able to adjust to the abrupt transition to remote learning pretty well. She had already been focusing on making her senior year memorable. She reflected on the diversity of her four-year experiences, which outside of research included being involved in the Indian classical dance club, the makerspace community and mentoring refugees in Chapel Hill.

“Every moment of my senior year, I’ve felt more appreciative of Carolina. I took the time to reflect and made sure every time I spent with my friends was really special,” she said. “I’d love to see my friends again, but friendships don’t end just because we’re not in the same place right now.”

In fact, after everyone is done with finals, she and her friends are planning a Zoom party to celebrate.

Don’t give up on your dreams, she urges her fellow Carolina graduates.

“Carolina students have always been good at pushing through challenges and embracing new opportunities. Continue to do so.”