Imagine graduating from UNC Kenan-Flagler Business School after having played junior varsity basketball for one of the best college programs in the world.

Then picture heading to a remote village in Rwanda, one of the world’s least developed countries.

While your classmates are learning the ropes at investment banks and consulting firms, you’re adjusting to life without running water — or electricity — or Wi-Fi.

That’s the start of the story of Jake Mendys ’16, who worked as a Basketball Health Corps Fellow with Shooting Touch in Kayonza, Eastern Rwanda. The nonprofit uses the power of basketball to educate and empower at-risk youth to reach their full potential by providing access to basketball through courts, coaches and equipment; changing attitudes and behaviors through health education curriculum; and ensuring access to adequate care by sponsoring healthcare coverage.

As both coach and educator, Mendys taught young Rwandans about basketball as well as teen pregnancy, STDs, gender-based and domestic violence, and other basics for living a healthy life.

Basketball has been a passion and a source of lessons about leading and mentoring for Mendys, who was both player and vocal leader for Carolina’s JV basketball team.

“What drew me to the Shooting Touch program was that basketball has given me every opportunity I’ve ever had,” says Mendys, who earned a bachelor’s in business administration from UNC Kenan-Flagler Business School. “I wanted to give back.”

At Carolina, Mendys’ days were packed with classes, basketball and more, such as managing the men’s lacrosse team during the basketball offseason. 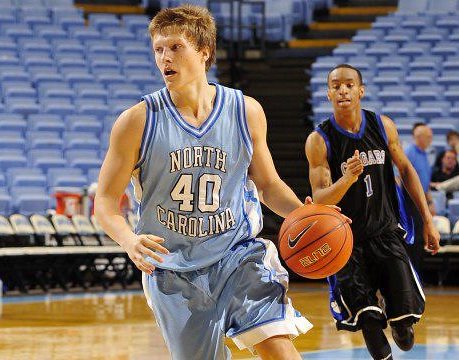 As a first-year student, he was part of the organizing team for Carolina’s Dozen Doughnut Dash, a student-run charity race benefitting the UNC Lineberger Comprehensive Cancer Center. The cause was close to Mendys’ heart since his mom had a malignant tumor on her spine, from which she recovered. By the time Mendys was a senior he was president of the organizing committee and led the most successful race to date.

His tenure was “great business practice” – navigating the red tape and logistics of putting on an event and negotiating with vendors and sponsors – to test what he learned in class. The experience helped him recognize that while being adept with numbers was important, solid management and people skills were critical, too. He developed a deep appreciation for how business skills can be used to do great things outside of a strong balance sheet.

He also applied his business studies to address a real business challenge. In the STAR Program, he worked on a team with Undergraduate Business and MBA students on a strategic marketing project for Nike Golf.

“It was a taste of the consulting life,” says Mendys. “We worked long hours. There were many late nights. Then we flew into Nike World Headquarters in Beaverton, Oregon, to give the final presentation to some of the top 20 executives at Nike Golf.”

Mendys also worked as a Red Bull North America campus brand manager and had internships with Morgan Creek Capital Management as a private assets analyst and with Nike Inc. in running sports marketing. He received the James K. McLean Merit Scholarship to attend the South Africa Global Immersion Elective and graduated with distinction.

To be accepted the Shouting Touch program, he had to past a final test. It was like applying to college all over again, writing essays and making a video about his life story and dreams for Shooting Touch. Before he left the U.S., he raised financial and in-kind donations totaling more than $40,000 for Shooting Touch.

After he started his work in Rwanda in September 2016, enrollment increased by 119% as did participation hours (169% year over year). He managed a $30,000 operating budget and 16 employees across five project sites. He fundraised and provided health insurance for more than 600 families in conjunction with the Rwandan Ministry of Health.

Living the Carolina Way, Mendys wants to pay it forward for the people of Rwanda. “The people are all kind,” says Mendys, who learned enough of the local language, Kinyarwanda, to get by. 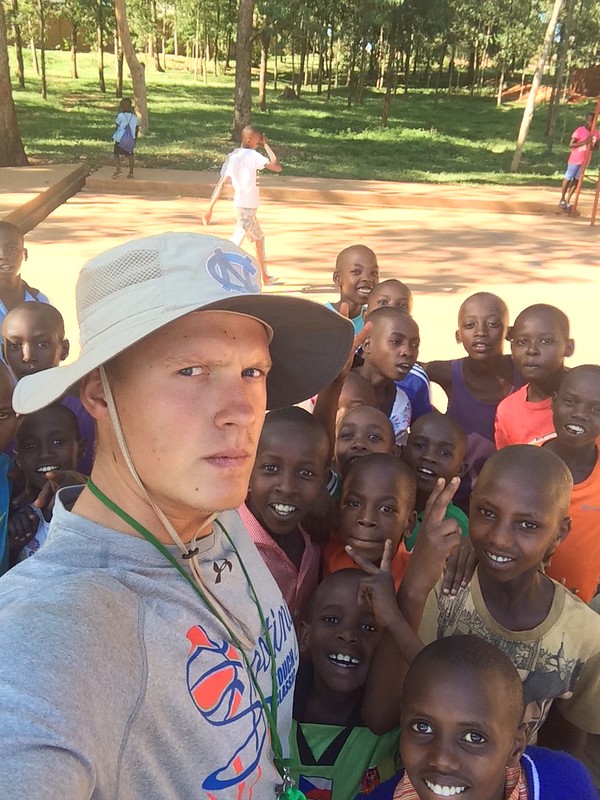 When he noticed the talent of Nkundwa Thierry, Mendys helped the student develop basketball skills and make connections to the National Basketball Association and International Basketball Federation. Thierry headed to Mauritius with the under-16 Rwanda national basketball team to compete in FIBA’s African Championship. The NBA called on Thierry to invite him to participate in Basketball Without Borders, the NBA’s signature youth camp on the African continent, where he was the only representative from Rwanda.

Thierry is like a younger brother to Mendys. “I was the happiest person in Rwanda when we got the call from the NBA that Thierry was chosen for the camp. It was 11 at night and I ran across town, shouting, to tell his older brother the news.”

The work of Shooting Touch is so much bigger than basketball, he says.

“I am of the opinion that anyone can come and teach these kids to dribble, pass and shoot a ball. Teaching life skills – teamwork, unity, perseverance, a sense of duty to our fellow man – these require a special blend of patience, experience and empathy from the teacher as well as a welcoming and inclusive learning environment.”

Back to the U.S. – and basketball

Mendys returned to the U.S. ready to apply the personal and professional lessons he learned in Rwanda – including the power of helping others reach their goals as he achieves his own.

He joined the National Basketball Association in 2018 to support various administrative processes for the NBA’s officiating program.

Now a business development and international expansion manager for the NBA in New York, he has supported and led a host of projects, spanning multiple domains and geographies.

He worked on the NBA Season Restart, informally referred to as the NBA Bubble, where he spent over 100 days living at Disney World in Orlando during the summer and fall of 2020. “I was fortunate enough to partner with another alum, Tom Ryan ’12 on the roll-out of multiple aspects of the health monitoring technology that was deployed in Orlando to help prevent COVID cases, including managing end-user experience and data integrations for the NBA MyHealth App.”

During the 2020-21 season, he was asked to complete additional health-focused work as a part of the NBA’s COVID response. He worked stretch assignments with the NBA’s legal and medical departments to design and implement the processes behind the NBA’s in-season COVID testing program for referees, assisted with the launch of several experimental COVID testing pilots and led the development of the data collection and reporting processes for the NBA’s team vaccination efforts.

Concurrently, he led the design and implementation of league governance functions – such as playing rule changes and game analytics processes – for the NBA’s upstart league in Africa, the Basketball Africa League.

He led the partnership with FIBA and NBA Africa to create the Basketball Africa League’s officiating function, including the recruitment and training of the league’s officiating staff of 22 referees from more than 10 different African countries; assisting with the hires of three new employees; and owning the P&L for the BAL officiating program.

Part of it for life 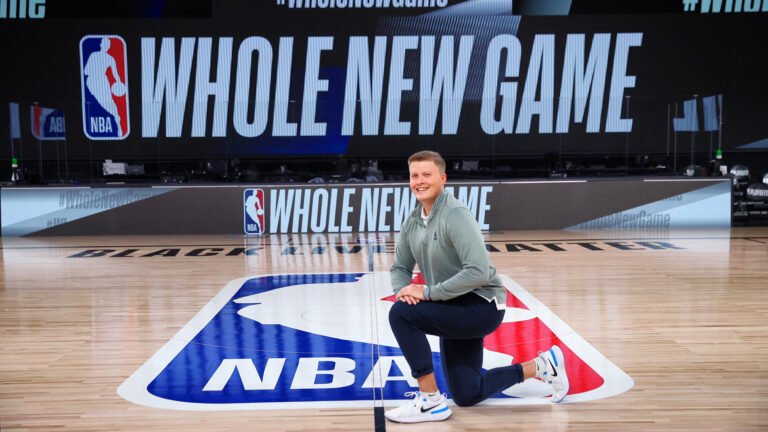 In May 2021, he returned to Rwanda for the Basketball Africa League’s inaugural season, nearly five years after his initial work there began, spending another month in a bubble-like environment, while playing a meaningful role in bringing professional basketball opportunities closer to home for kids all over Africa. The Basketball Africa League’s mission is to elevate, inspire and empower Africans through basketball by providing a platform for elite players from across the continent to showcase their talent and inspire fans of all ages, by using basketball as an economic growth engine across Africa.

“I’m grateful to my manager and department for entrusting me with so much responsibility within our department on the work for the Basketball Africa League and go beyond the scope of my departmental role to be a part of supporting so many different projects within the League’s COVID response.”

And he’s not finished with Shooting Touch. “Once you join this organization, you’re in it for life,” he says.

He serves on its Young Professional Board to help raise funds and awareness for the non-profit. He ran the New York Marathon for Shooting Touch in 2019, raising just over $6,000 for the organization while completing the race in under four hours.

“I am slated to run the Boston Marathon on behalf of Shooting Touch in October 2021,” he says. “I need to raise $10,000 for Shooting Touch to run it,” he says. “All of the money I raise will go directly towards the Boston and Rwandan programs, with $6,000 earmarked for 1,500 people I used to train and teach in Rwanda to obtain health insurance.”

And of course – wherever he is in the world – he will be cheering on Thierry and the others whose lives he touched during his hoops journey in Rwanda.