When Carolina senior Joey Lancellotti decided to take Music 269, “Music in the Community,” during the fall semester, he thought it would be a fun course that would allow him to combine two of his interests.

“I needed an experiential education credit before graduation, and I wanted to find one that I was interested in, rather than just taking it to fulfill a credit,” Lancellotti said. “Once I found Music 269, it was perfect because it combined helping the community and music, which are two of my favorite things.”

The APPLES Service-Learning course became be even more fulfilling than he thought it would be, thanks to the final project assigned by John P. Barker Distinguished Professor of Music Mark Katz. The assignment required students to complete a 30-hour service-learning project in which they designed and implemented a music-based project for any community, on or off-campus.

Lancellotti’s project resulted in “Afraid of Me,” a four-minute song written by Lancellotti and recorded by Matt Gorman, one of his close friends, that conveys the stories of pediatric cancer survivors and the strength they displayed during their respective battles with cancer.

“In one line of the chorus, it says, ‘Cancer should be afraid of me,’ and it’s the idea of being tougher than it,” Lancellotti said. “During a fight, that’s what you want to hear: that you’re tougher than the thing you’re fighting.”

Read the lyrics to Lancellotti’s “Afraid of Me”

The possibilities for the project and the communities that the students could work with were endless, but it didn’t take long for Lancellotti, who is a member of the Carolina baseball team, to decide which community he wanted to work with.

Since his first year at Carolina, he has volunteered with his teammates in the pediatric hematology-oncology division at UNC Children’s Hospital, spending time with patients receiving cancer treatments and developing a close relationship with Dr. Patrick Thompson, an associate professor at the School of Medicine and the program director for the Pediatric Hematology-Oncology Fellowship at UNC Hospitals.

“I thought, ‘What better than using this project as a way to continue those relationships?’” Lancellotti said. “I wanted to really connect with them in a different, meaningful way.”

At first, Thompson and Lancellotti thought the senior could organize a virtual karaoke night for patients or teach guitar lessons over Zoom. But when Lancellotti decided to write a song instead, everything fell into place. 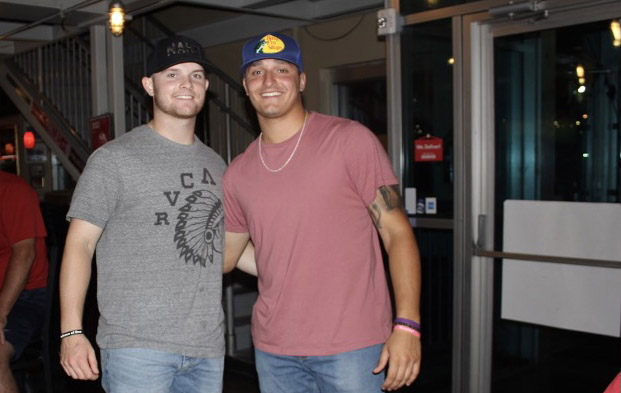 Lancellotti and Gorman grew up playing guitar and writing songs together in their hometown of Bensalem, Pennsylvania. Lancellotti’s assignment allowed them to collaborate again, this time creating a song with a more inspirational purpose than ever before.

“I couldn’t have imagined that he would end up with something so beautiful, so professional and so meaningful to the patients that he worked on it with,” Thompson said.

To write the song, Lancellotti interviewed two pediatric cancer survivors, Edward Thompson and Hannah Burns, whom he knew from his time volunteering at the hospital. The experience became more than just background for a song.

“Talking to Joey helped me process my treatment and everything I had been through,” said Burns, who was diagnosed with Hodgkin’s lymphoma in 2019. “It was really nice because he got into some aspects that people hadn’t asked me about before.”

Lancellotti’s song highlights the individual stories of each survivor, as well as universal aspects of cancer treatment, creating an end product that artfully captures what it means to be a pediatric cancer survivor.

“In that song, I felt like Joey had gone through treatment with us. It was so accurate,” said Sarah Thompson, Edward Thompson’s mom. “He actually understood it with words that really articulate what it’s like for a kid to go through chemotherapy. It’s very accurate to how Edward and other kids feel.”

Since the song was recorded, Lancellotti and Dr. Patrick Thompson have shared it with other patients and families going through cancer treatments in hopes that it inspires them, as it did for Burns and Edward Thompson.

“I know how much they’re fighting and how hard this is for them,” Lancellotti said. “I’m glad we have this song to brighten their day and that we found a way to bring a smile to their face and get their mind off things.”

Read about other projects from Music in the Community