Campus was buzzing as Tar Heels returned to classes this morning, but no place was more popular than the Old Well.

Hundreds of students lined up along Cameron Avenue to take part in the decades-old tradition of the first sip.

Legend has it that a sip from the well, which has been a focal point of campus since the University opened in 1793, brings students luck in the form of good grades. But talk to Tar Heels in line, and you’ll hear mixed reviews about the Carolina icon’s ability to manifest perfect grades. 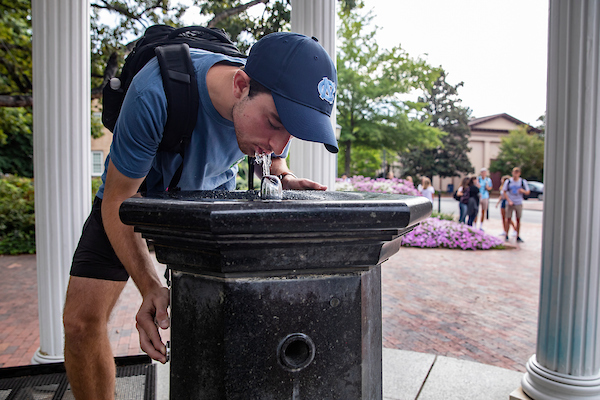 UNC students sip from the Old Well on the first day of class on August 20, 2019, on the campus of the University of North Carolina at Chapel Hill. (Johnny Andrews/UNC-Chapel Hill)

“It has never actually worked for me, but I think it’s user error, not [the Old Well’s] magic,” said senior Meghan O’Shaughnessy, who has participated in the tradition for the past four years — if not for the grades, then for the Instagram pictures. “I believe in the magic. I think this is the year, for sure. It’s going to happen this time.”

For transfer student Morgan Simmons, standing in line to sip from the well was less about the grades and more about being part of a community of students with big dreams for a new academic year.

“I’m not super superstitious, but I think it’s an important tradition,” she said. “I’ve already met a lot of people, and I just feel like this is right. I belong here.”

Whether or not the Old Well delivers on its lofty promises, students agreed that the ritual brings Tar Heels together as they enter into a new semester.

“You see everyone of every age and every culture lining up all the same,” said sophomore Eli Grossman. “It’s kind of nice to see seniors and freshmen and everyone doing the same thing, believing the same superstition. It’s nice to keep the tradition going.”