At Meantime Coffee Company on Carolina’s campus, the students behind the counter are not only baristas but also CEOs, sustainability officers and marketing directors.

The coffee bar, located in the lobby of the Campus Y, is a nonprofit business, operated by more than 35 students, that sustains itself while financially contributing to fellowships, grants and charities.

“Meantime was initially founded by three students under the framework of a social enterprise,” Moore says. “I think our growth over the last six years has been a testament that the social enterprise model works. Meantime is a special place because we’re small enough to be nimble and make strategic decisions quickly, but large enough to have a true impact.”

The coffee shop, which serves more than 2,500 students, faculty and staff per week, is on track to have a record year of sales in 2022. Of the 35 employees, six are executive team members, ten are administrative associates and 19 are baristas, although you can find Moore behind the counter pouring drinks as well.

“We stress the importance of everyone working shifts in the shop because it’s important to understand every facet of the business, and each member of our executive and administrative team works weekly as a barista,” Moore says.

“This year we’ve seen a 97% increase in reusable cups, and we recently began offering free non-dairy milk options so it’s not cost-prohibitive for those with allergies or preferences,” Pryor says. “We’ve diverted 8,755 pounds of garbage from the landfill so far.”

As a nonprofit, Meantime allocates all its proceeds to social investments. After paying all their workers the Orange County livable wage standard, Meantime donates 50% of its profits to the Campus Y reserve fund, which typically funds the Bridges Scholarship Program. An additional 10% goes to the Campus Y general fund, which is dispersed to various student organizations in the Campus Y, and the final 40% is donated to a cause voted upon by the Meantime employees. Previous recipients include the Marion Cheek Jackson Center and Time Out Youth Charlotte. 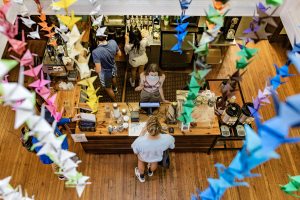 Meantime’s student-run structure also creates opportunities for Carolina students to gain valuable work experience before graduating. The chief marketing officer, Alyson Cabeza, is an English and comparative literature major who hopes to go into marketing when she graduates in the spring.

“I’ve learned the ins and outs of marketing in this position and run social media campaigns, all before graduating,” Cabeza says. “It’s really exciting to be able to apply what we learn in the classroom to a real business and see things materialize in the café.”

Moore emphasized that he and the other executive members want Meantime to function as a real business to create learning opportunities for students.

“When I began my major I didn’t know what path of environmental issues I wanted to pursue, and this experience has highlighted that sustainable business models are what I want to work on in the future,” Pryor says.

Although Meantime provides many benefits to its employees and customers, the most important part of Meantime’s corporate mission is still to serve the campus community. That mission is what sets it apart from the competition, according to Moore.

“When you come in and purchase a cup of coffee from Meantime, you’re getting a quality drink, but you’re also supporting a non-profit and the campus community at the same time,” Moore says.