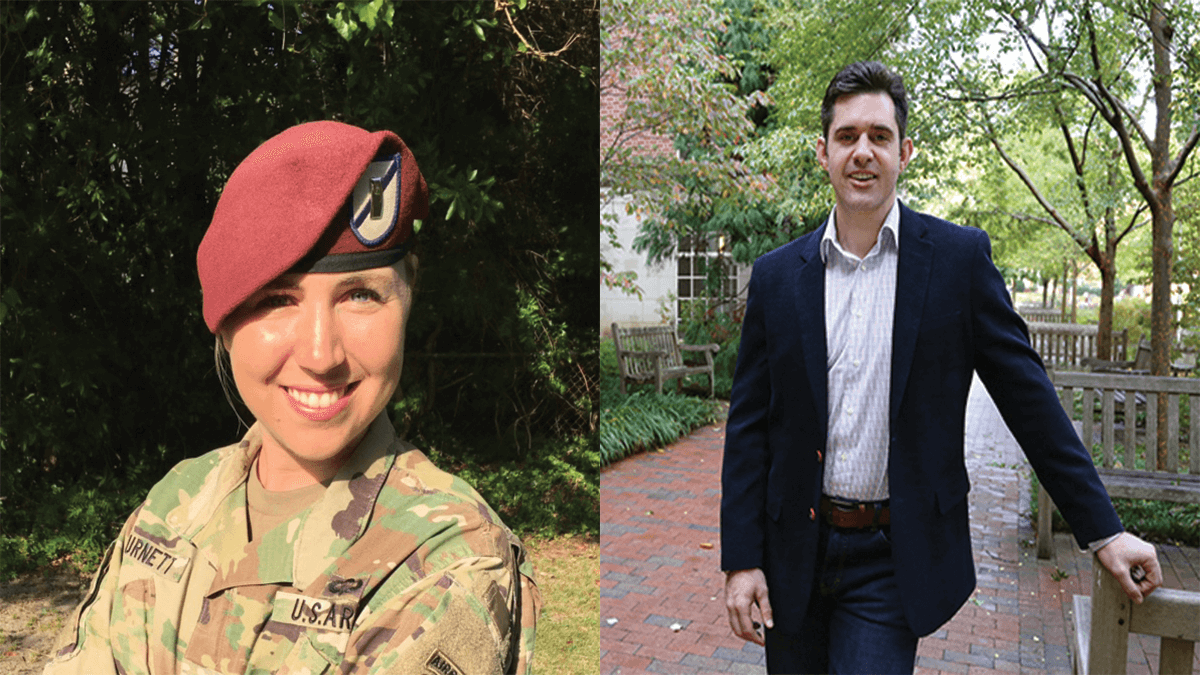 Serving others isn’t anything new for Charlotte Burnett or Karl Holt. With a combined 14 years of Army experience, the two Carolina students have made a living out of doing just that.

Now, as they prepare for the next phases of their professional lives as a business leader and doctor, respectively, they’ve been charged to continue to make an impact on the world around them.

The two were recently named Tillman Scholars by the Pat Tillman Foundation, which honors the legacy of the NFL player turned Army Ranger who died in a friendly-fire incident in Afghanistan in 2004. Holt, who is entering his third year at the UNC School of Medicine, and Burnett, an MBA student at UNC Kenan-Flagler Business School, earned the recognition for their service, leadership and potential as civilian professionals.

The scholars “believe their best years of service to our country are still ahead of them, and they are committed to making a direct impact to strengthen communities at home and around the world,” said Marie Tillman, board chair and co-founder of the Pat Tillman Foundation.

Both Holt and Burnett say the recognition serves as motivation to excel in their fields.

Burnett had always planned to follow her parents’ footsteps and serve in the military, as did four of her siblings.

She received a four-year ROTC scholarship at Wake Forest University, where she studied political science and international affairs. After graduating in 2013, she received her commission and was stationed at Fort Bragg, where she served as the human resources manager for the 97th Civil Affairs Battalion (Airborne) — a unit within Special Operations Command.

During her four years there, Burnett became interested in human capital and creating equal opportunity for women in the military. She co-founded Fort Bragg’s Women’s Mentorship Network, further igniting her passion for finding career opportunities for women.

“I saw that there was a lot of work to be done in the Army, but I also thought that the private sector was a great opportunity to drive change,” Burnett said.

Burnett had always planned to earn a graduate degree so when she left the military, she enrolled in the MBA program at UNC Kenan-Flagler Business School to begin a new career.

As a Tillman Scholar, Burnett said, her goal at Carolina is to take what she’s learning and make a difference.

“To me, it means I am charged to do something more than just go to school and get an education for myself, but to continue to use my education as a way to effect change,” Burnett said.

For Holt, a native of Anchorage, Alaska, the military was a third career after stints as a professional speaker and then working in finance.

But it was medicine that became his true passion.

After the Sept. 11 attacks left him feeling like he needed to do something, Holt enlisted in the Army when he was 29 years old and became a medic.

“I got to serve. I got to do something that I felt was meaningful or bigger than myself,” he said. “At the same time, I was completely fascinated by medicine. I loved it. … I loved everything about it. Not only the high-octane nature of it, but also the whole component of service and going to work every day and doing something that changes people’s lives.”

Holt was a special forces medic stationed at Fort Bragg until he deployed to Afghanistan in 2009. Five months into an eight-month deployment, while on a mission in the western part of the country, his unit’s helicopter crashed from 800 feet.

Holt was the only medic on board.

Even though he had a broken back and a severely injured leg, Holt treated 10 patients at the crash site until support arrived.

Back in the United States, Holt’s recovery included 32 surgeries in seven years. The experience further solidified his desire to become a doctor.

When his injuries healed, Holt became an instructor at the Joint Special Forces Medics Training Center. He enrolled at Carolina in 2015 and is training to become a surgeon. He hopes to work in critical care and trauma.

“I like helping people who just had the worst day of their life,” Holt said. “I think trauma can be the greatest gift in your life. It’s an opportunity to reset life. Something traumatic happens and everything that’s not important goes away. You realize what matters. The unimportant, frivolous aspects of life get thrown out the window.”