The UNC Symphony Orchestra’s spring concert will look a little different this year.

Due to pandemic restrictions, the normally 80-plus person orchestra has been pared down to 29 string-only members. That’s partly due to rehearsal spacing guidelines but also because of the aerosols that wind instruments generate.

Still, music director and conductor Tonu Kalam saw an opportunity to make the concert a memorable one. With funding from the College of Arts & Sciences’ music department and Arts Everywhere, he approached Maestro William Henry Curry, his good friend and Durham Symphony’s conductor, about composing an original piece for the concert.

Although Maestro Curry has built a storied career on conducting and composing, he first started out playing the viola. In fact, he plays every string instrument except the cello. “I liked the idea of composing a string orchestra piece because I’m very familiar with the timbres,” he says.

The resulting commission, titled “Dark Testament,” is based heavily on spirituals, an American musical tradition that has been disappearing. “Spirituals are incredibly important in the history of American music,” explains Maestro Curry. “I wanted to have the piece use snippets and phrases from them and develop them in my own style.”

Across three movements, Maestro Curry’s piece pays tribute to important African American women: the gospel singer Mahalia Jackson, Durham’s own activist Pauli Murray and abolitionist Harriet Tubman. His work and its focus are critical additions to the world of classical music, which has predominantly studied, performed and recorded music by white composers.

“We’re at a point where this is an important thing to pursue — to have the representation of less represented people. It’s become a big push in the classical music world in general. I think this is kind of a fortuitous side benefit,” says Kalam.

Senior violinist Sarah Davis has been playing with the UNC Symphony Orchestra since her first year at Carolina. She appreciates that Maestro Curry’s piece focuses on understudied historical figures. “I think he was invested in bringing out some strong African American voices,” she says. “Harriet Tubman, we all know, but the other two stories are a little bit less known. I think the way he’s done it is very interesting.”

It’s not just Maestro Curry’s knowledge of strings that makes him such a key part of this year’s spring concert. Performing works by living composers is important to Kalam. Like many orchestras, the UNC Symphony Orchestra regularly stages repertoire selections from classic composers, like Beethoven and Brahms, but Kalam has a vested interest in making sure students also get a chance to work on newer compositions.

“I think it’s important for students to realize that music is written by people and not just names in the cloud somewhere,” he says. It also adds to the experience of rehearsing and performing a piece when composers can participate in the process. “They can come and give you a new perspective.” 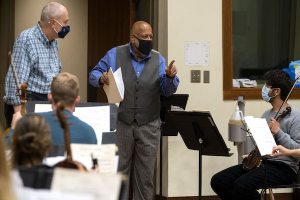 Davis has worked with composers as they rehearse a brand-new piece, and a big thrill is getting to discuss the intention and execution. “The great thing about working with a living composer is if you see something in the music, you get to be like, ‘Hey, is it supposed to be this way? What is it that you want?’” she says.

Maestro Curry has been attending rehearsals on campus, where he’s been able to share his inspiration and answer students’ questions. “The response from the students has been very positive,” says Kalam. “It has given them the unique opportunity to see what working with a living composer is like since Bill has made a few subtle changes, corrections and revisions in some of the details of the piece as the rehearsals have progressed.”

It’s a partnership that Maestro Curry also enjoys. “Teaching young people music, I’m sharing one of the things I love most in life, so it’s a win-win,” he explains.

Davis picked up on that very passion. “He loves everything about music,” she says. “Hearing his personality in the rehearsals makes some of the really big gestures in his piece make sense.”

There’s always a risk in commissioning a brand-new piece, but Kalam has been enjoying the process of rehearsing it with his students, even if it’s not the full orchestra he’s used to. “I am delighted with the way it has turned out, and I think the audience will be excited by the end result,” he says.

“Excited” is exactly what Maestro Curry is aiming for. “The bottom line always is that it be entertaining and enjoyable,” he says. “I don’t do boring music.”

Tune in to see the YouTube livestream of the concert on April 28, beginning at 7:30 p.m. The performance will be available to stream afterwards.