We rarely think about the history that lies below our feet.

But remnants of Carolina’s history, hidden in some cases for thousands of years, have burst through the soil in virtual and actual forms thanks to a new walking tour.

The Research Laboratories of Archaeology created a walking tour to show the dozen places on campus where archaeologists excavated and made discoveries about life before the University’s founding and during its first 100 years.

“Beneath Our Feet: A Walking Tour of Archaeological Sites at UNC-Chapel Hill” can be found at a website that fits whatever device you are using. A printed brochure is available for people who want to explore with paper in hand. The tour focuses on Carolina’s original campus, beginning near the Carolina Inn and visiting 12 sites where excavations were made since 1991.

“This is a lovely website — a reminder that an archaeological excavation is not just scientific activity, but also a work of art. It also gives a glimpse of what it means for a university to carry out its mission in one place for 225 years,” said Rudi Colloredo-Mansfeld, a senior associate dean in the College of Arts & Sciences whose oversight includes the RLA.

Colloredo-Mansfeld and others are particularly struck by the photos and 3D images of excavations and artifacts such as everyday items, American Indian artifacts, wells and building foundations that make the tour come to life. The 3D images can be rotated and viewed from all sides, even from an underground view. Steve Davis, a Carolina research archaeologist, and undergraduate students created the 3D images.

“The website allows us to talk about people’s lives and campus life and the history of the land before campus in kind of mundane everyday ways that people don’t bother to write down,” said Margaret Scarry, RLA director and chair of the archaeology curriculum.

Scarry was the one who suggested that the brochure be updated and a website created. “Given that we’ve already done the work, it’s fantastic to tap into some of the history of campus that will interest many people, instead of it being hidden below the landscape and available only in publications.

“The website gives us a little more room to make things come alive for people, whether they’re walking around or sitting in their home or office.” 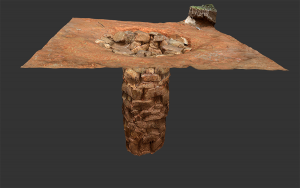 A 3D-modeling of an old well found near the Carolina Inn.

The tour begins near the Carolina Inn. There, you can see a 3D model of a stone-lined well, discovered in 2018 when workers repaved a driveway. A below-ground view shows the stones lining the well extending several feet down.

Other highlights include the Graham Memorial site, the first on campus investigated by Carolina archaeologists. In conjunction with the University’s 1993 bicentennial celebration, faculty and students worked on McCorkle Place’s north boundary. They found items from what was originally a tavern house, then hotel, then boarding house called the Eagle Hotel throughout the 19th century and into the 20th century, when it became the University Inn.

The Love House on Franklin Street was built on the site previously occupied by the home of Carolina’s second president, Joseph Caldwell, until it was destroyed by fire. A 2004 excavation proved the site was also occupied well before Caldwell’s time, with finds that included undisturbed evidence of a 1,500-year-old American Indian settlement.

Remains associated with Steward’s Hall, one of the first buildings on campus, were found near New East. Constructed in 1794 and used as a dining hall until 1816, the building was a center of University life. In 2007, excavators found numerous artifacts from the early 19th century, likely discarded trash-in the back yard of Steward’s Hall.

Work near Pettigrew in 1997 before construction of Hyde Hall found the site of a Phi Delta Theta fraternity house and, below that, of a privately-owned dormitory called the Poor House, razed before 1880.

At Old West, a crawlspace exploration yielded many everyday items and an American Indian spear point that is thousands of years old.

Along Cameron Avenue, utility work and limited excavation revealed the foundation of a portico for Old Memorial Hall, which was torn down in 1930 because of its dangerous deterioration and replaced by Memorial Hall in 1931.

Bringing the stories to life was largely the work of Davis, who worked on all of the excavations; Colleen Betti, a research assistant who works on public outreach and created the website; and Heather Lapham, a research archaeologist.

“We hope that this can be used by a variety of people, especially faculty and students who are trying to do something related to campus history or maybe public schools looking to do something on history and archaeology,” Betti said.