When A’sja Abron first stumbled across the Carolina women’s rugby team, she had no idea what she was getting into. She didn’t know anything about the game, wasn’t necessarily excited about the prospect of tackling and didn’t have cleats.

She just knew that she wanted to be a part of a club to stay active and meet new people.

Though she may not have known quite what to expect when she first stepped on the pitch, Abron found exactly what she was looking for in the team. 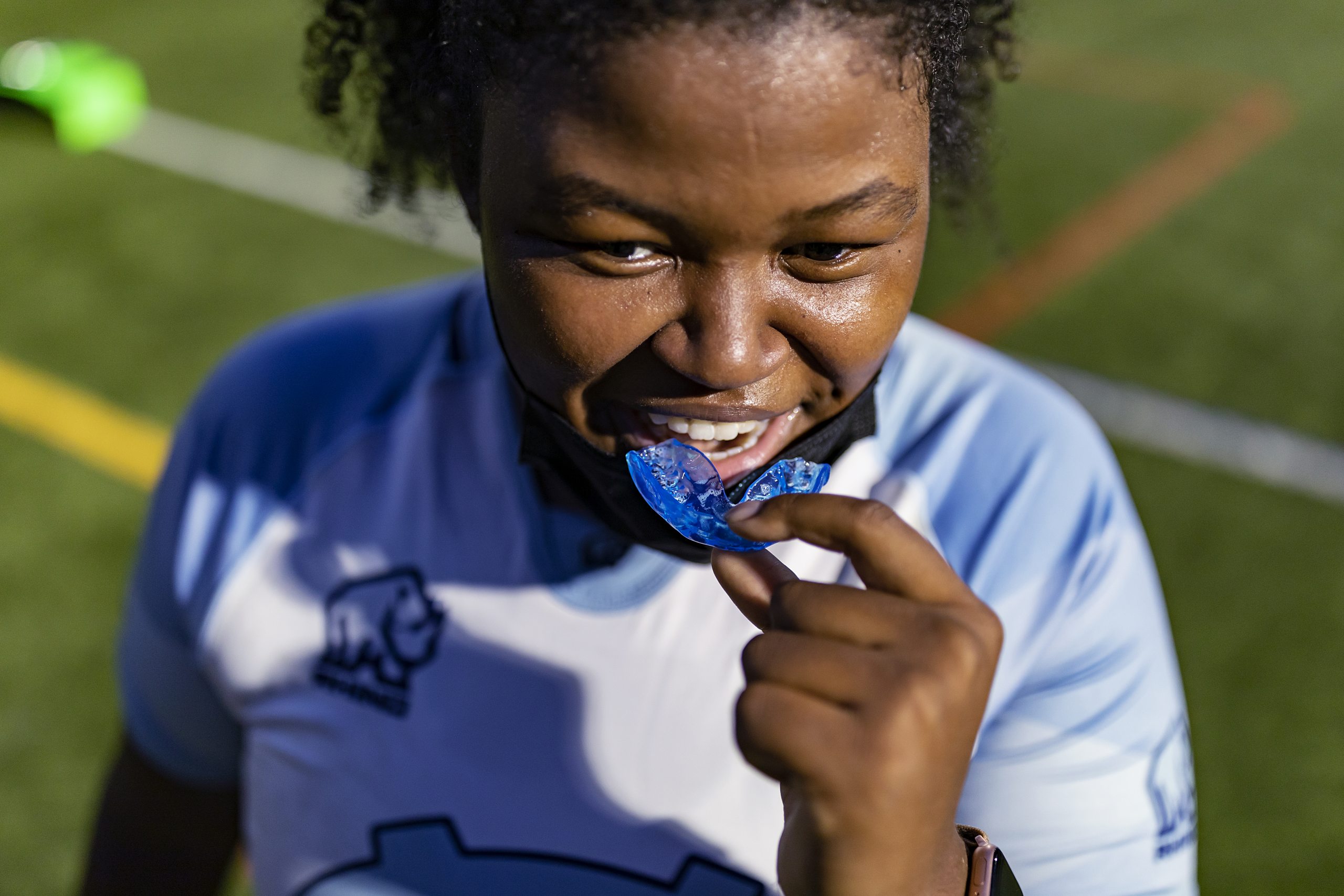 “I stayed for the people. Really, the only reason I came back out is because somebody texted me every single day that we had practice,” says Abron, a junior studying psychology and human development. “The rugby community, in general, is very accepting. After all the games, we socialize with the other team. It doesn’t really matter what happened on the pitch. You bond over this common thing.”

Abron and more than a dozen other Tar Heels have found their on-campus community while also representing the University at a high level on the women’s club rugby team.

The team is one of Campus Recreation’s 48 Sport Clubs and competes in USA Rugby Division I’s Blue Ridge Conference with Virginia Tech, East Carolina University, the University of Virginia, NC State and James Madison University. Since forming in 1993, the Tar Heels have won four state championships and advanced to the national tournament six times. They even have an Olympian as an alumna.

The team most prides itself on teaching players who are brand new to the game — which is most of them — and fostering a passion for the sport.

“I’d say 90% to 95% of our players have never held a rugby ball before, much less played rugby,” says Rebecca Lee, a junior and the team’s president.

The team spends more than a month before the season teaching the players the game and how to play safely. For many of the players, including Abron, the biggest hurdle is being comfortable tackling — and of course, being tackled. Though from the sidelines it can seem a bit overwhelming, fullback Sophia Sherman says the game is for everybody. 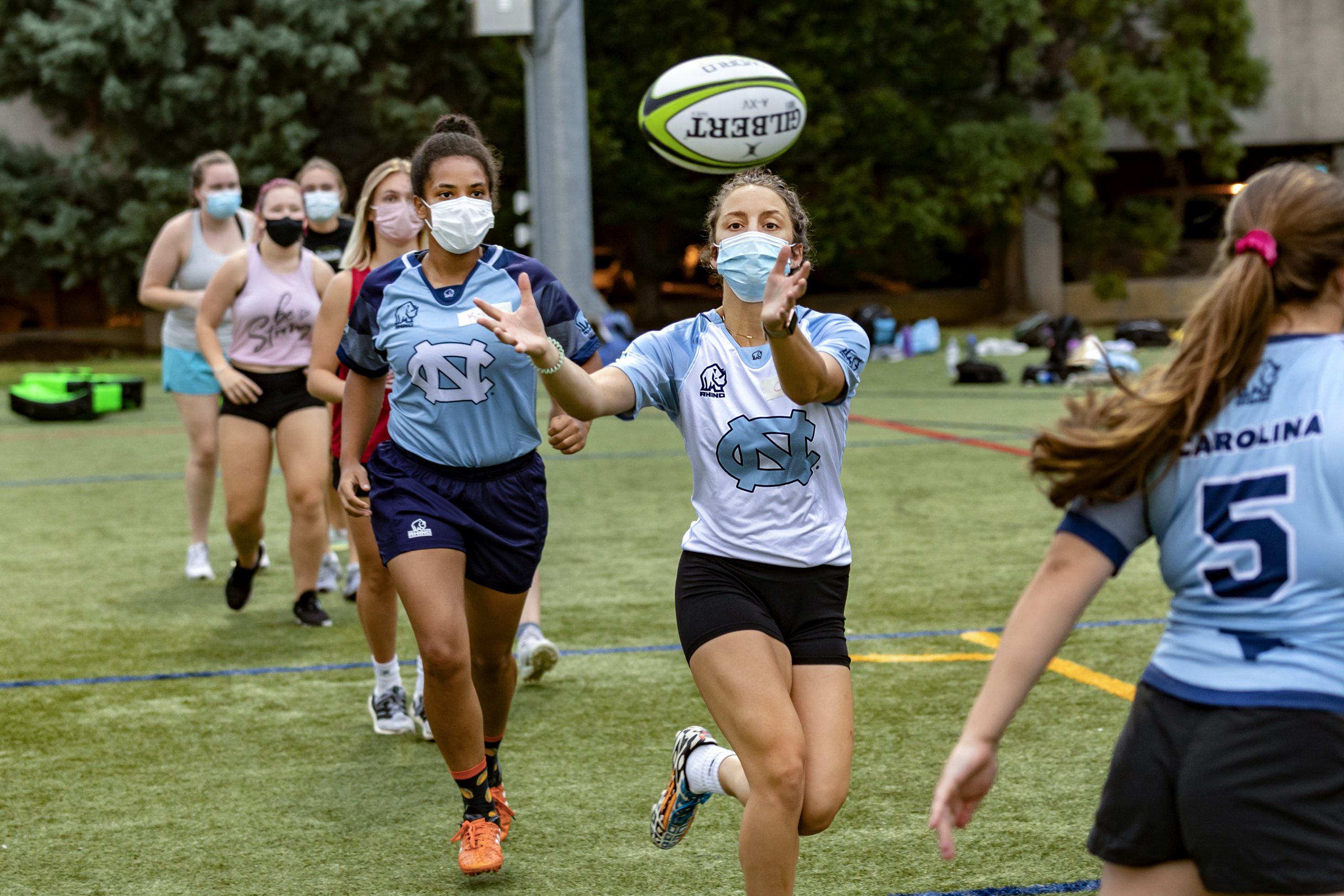 That message is at the core of the team.

“Every body is a rugby body,” says Sherman, a senior majoring in biology. “You have so many positions, and you need different body types on the field to do different things. Rugby seems a lot scarier than it actually is. Once you get into it, it’s a lot more fun than it looks.”

Among the players who have come through the women’s rugby with zero experience is Naya Tapper ’16, who joined the club as a first-year student in 2012. Though she first heard about rugby in high school, she didn’t have the chance to try the sport out until she was a Tar Heel.

As a former high school All-American in track, Tapper had an immediate edge on the field, but she learned the basics of the sports on the fly with teammates.

“It was difficult because I had never done a hand-eye coordination sport,” she says. “Learning how to catch the ball took a while. You don’t get hand-eye coordination overnight. But once I got used to catching the ball, running was the easiest part. After getting over the learning curve, it was pretty easy.”

And once she figured it out, she was dominant. Since graduating, Tapper has had a successful career as a professional rugby player and earned a spot on the U.S. women’s rugby sevens team for the 2020 Tokyo Olympics.

“I fell in love with the sport as I got better as a player. I also fell in love with the culture and the people that are around it. They’ve taught me a lot of things,” she says. “I didn’t know that this is where it would take me, and now I can share that with a lot of other people who may have the same dream.”

Though it was the practices and matches with the Carolina women’s rugby team that initially built Tapper’s passion for the sport and launched her career, it’s the social aspects of the team that she considers her best memories.

“It’s a fun experience, and it allows you to meet amazing people and find a group of girls that will allow you to enjoy college,” she says.

That social environment is what current Tar Heels continue to be dedicated to today. While the team is focused on teaching the sport and competing hard, that’s only part of the equation. Abron considers the team 60% social, 40% competition. 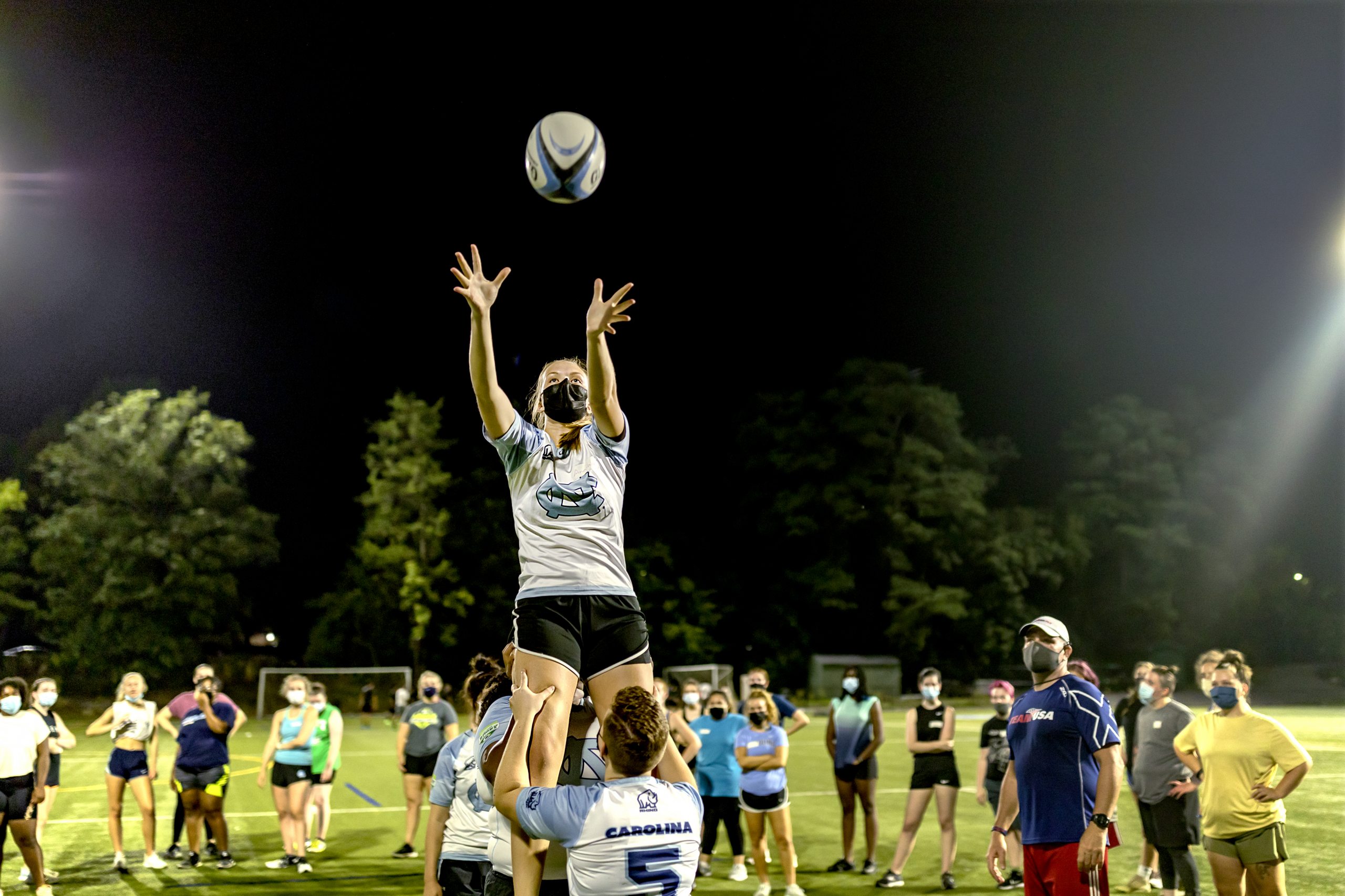 “You come to try something new, and you stay for the community we built around it,” Sherman says. “If you happen to come out of here loving the sport, that’s great. That’s what we want. But we also want to build that strong community that makes people want to come back, even if you don’t think rugby is for you. Eventually, it will be for you.

Those close connections aren’t just important for the college experience. They’re also critical for the pitch.

“Being such good friends with them, I feel a lot more comfortable tackling them, and you get better together so that when you’re out on the pitch competing against teams, you all work as one unit because you’re so close,” Lee says. 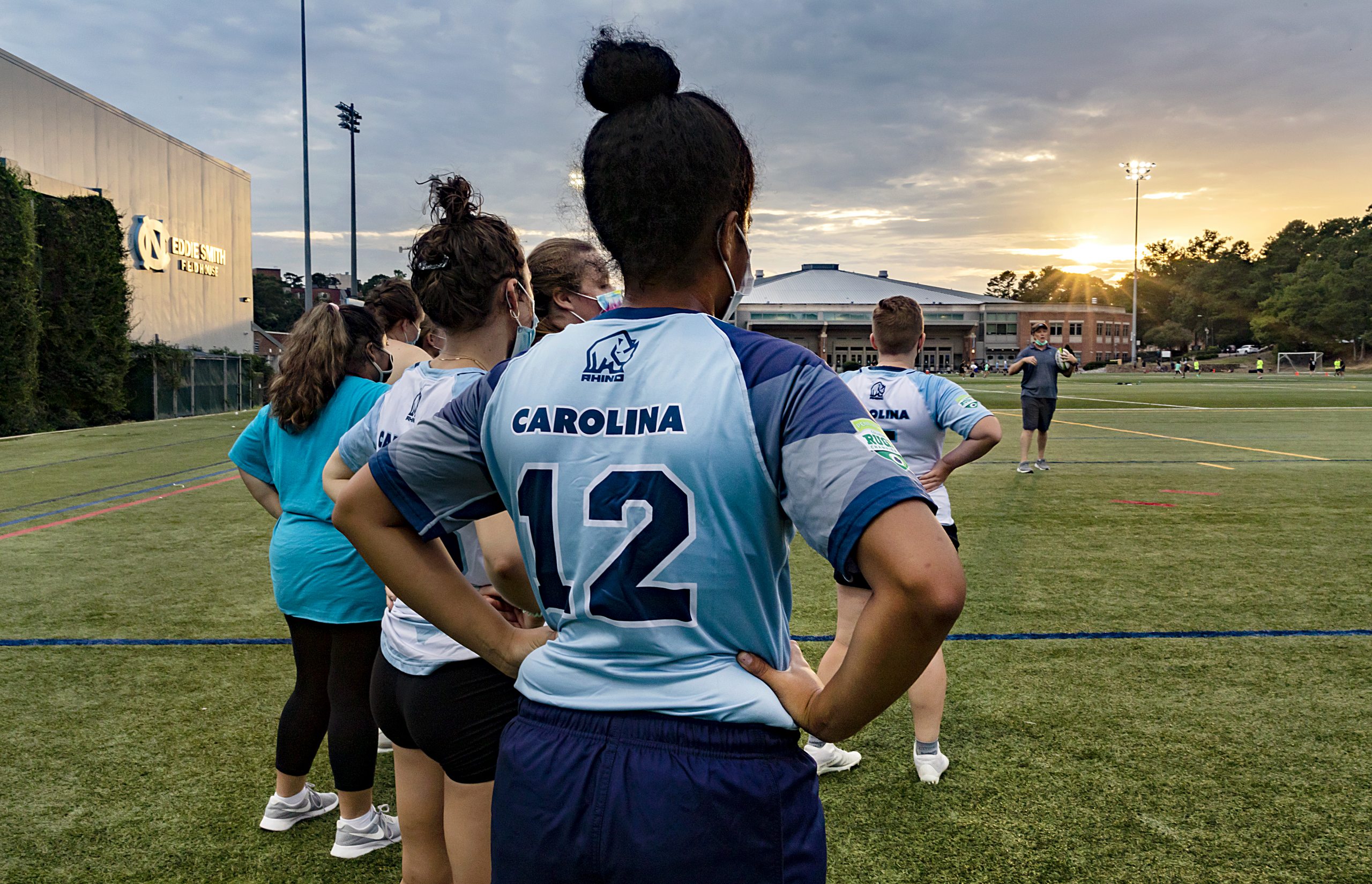 Team leaders have worked to keep their community close-knit throughout the pandemic by continuing to practice when it was safe, competing in tournaments and holding two-hand touch scrimmages. After 20 months off the pitch, the team will kick off its new season against Appalachian State University on Sept. 25 at Hooker Fields.

For Abron, Lee and Sherman, the match will be the long-awaited return to the sport they’ve grown to love, but they’re most looking forward to opening the world of rugby to the sophomores and first-year students just getting started.

“Your first game is so special,” Lee says. “It’s when you realize what rugby is.”