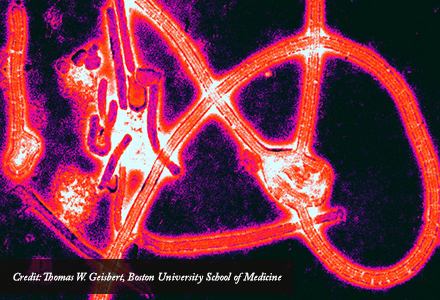 In the war against Ebola, one important hurdle has just been cleared – by a mouse.

Researchers at the University of North Carolina at Chapel Hill and colleagues have developed the first genetic strain of mice that can be infected with Ebola and display symptoms similar to those that humans experience. This work, published in the current issue of Science, will significantly improve basic research on Ebola treatments and vaccines, which are desperately needed to curb the worldwide public health and economic toll of the disease.

“You can’t look for a cure for Ebola unless you have an animal model that mimics the Ebola virus disease spectra,” said study co-author Ralph Baric, professor of epidemiology at the UNC Gillings School of Global Public Health and UNC School of Medicine. “For the first time, we were able to produce a novel platform for rapidly developing new mouse models that replicate human disease for this virus, as well as other important emerging human pathogens.”

Typical laboratory mice usually do not develop human-like Ebola disease, including the severe symptoms that can prove fatal in humans. So the researchers asked whether all mice are immune to Ebola, or whether some strains of mice are susceptible; and if some are susceptible, could they harness the power of mouse genetics to figure out what genes make someone susceptible to the disease.

To find out, the team, including researchers from the University of Washington and the NIH Rocky Mountain National Laboratory, where the research took place, were able to breed together eight genetic mouse variants and successfully test a strain of mice to permit active research on potential Ebola vaccines and treatments. This model system more accurately reflected the human experience when infected with the virus.

The team was able to show that a combination of genes were involved in producing a range of disease symptoms, such that the genetic variation of the mice directly led to the variety of symptoms that the disease produced. What’s more, the researchers pinpointed a single gene that accounted for much of that variation – a gene responsible for encoding a protein known as TEK.

“Public perception of Ebola infection typically focuses on the high mortality rate following hemorrhagic fever, but Ebola actually produces a range of disease symptoms,” said co-author, Martin Ferris, a research assistant professor of genetics in the UNC School of Medicine. “During an outbreak, it is often difficult to assess the role that genetic variation plays in determining disease severity in people. And if we’re going to develop treatments, then we need to know about this genetic variation.”

Co-author Mark Heise, professor of genetics at the UNC School of Medicine, added, “the mice were part of the Collaborative Cross initiative at UNC-Chapel Hill, which was designed to better model human genetic diversity, and it has proven to be a powerful system for studying how genetic variation affects susceptibility to a number of emerging pathogens, including Ebola virus. It has been a tremendous program with big dividends.”