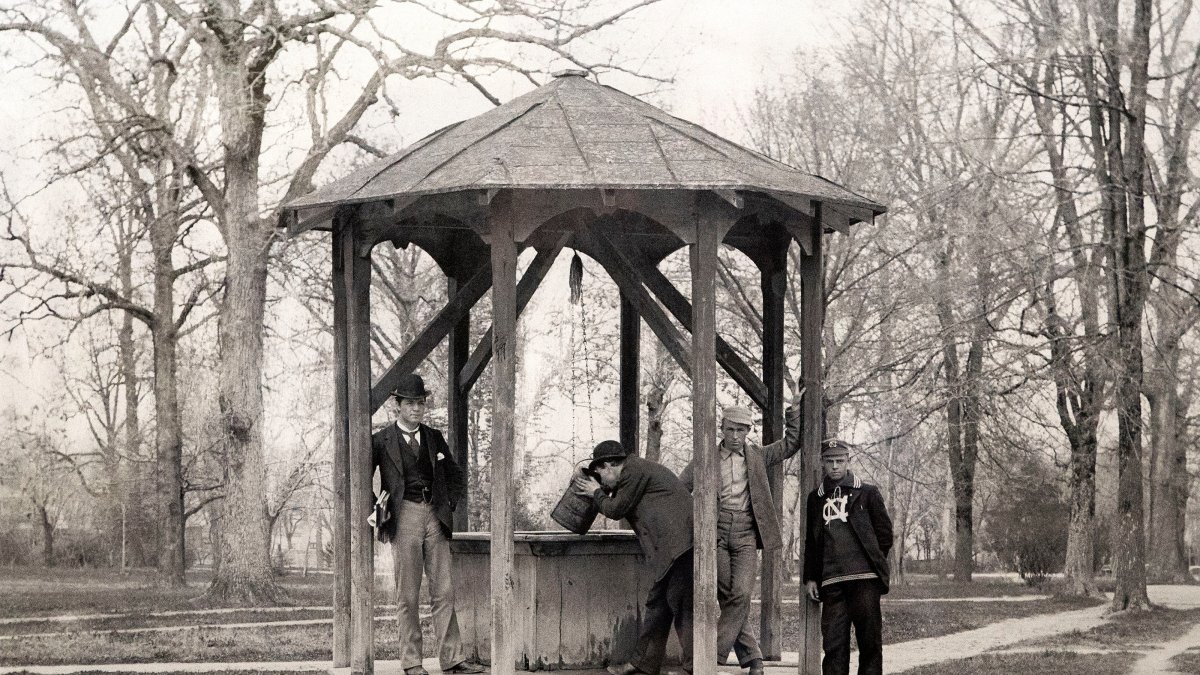 There is only one known existing image of the iconic Old Well that dates back past the pillars and marble to when a wooden structure was simply known as “the well.”

Taken for former University of North Carolina President Kemp Plummer Battle, and wedged between the pages of a 120-year-old photo album, the faded photo is among a collection of images showcasing 19th century life in Chapel Hill.

“This is the most comprehensive set of images from a set period of time,” said Stephen Fletcher, photo archivist for the North Carolina Collection. “This would be the earliest set of town scenes.”

Photograph archivists at the Wilson Library’s North Carolina Collection recently reorganized and relaunched the photo album online to give viewers a full experience of the 19th century artifact. All 74 images of the book have been scanned and formatted into a virtual album, which allows researchers the ability to flip through the book like intended when it was created in 1894.

“We made a conscious effort to be able to show the album as an album,” Fletcher said. “We didn’t just photograph the individual images. We wanted people to see what the album looks like and be able to recreate the experience of turning the pages and seeing the images.”

Part of the library’s North Carolina Collection, which focuses on history of the state and its people dating back to the 1500s, the photo album has been in possession of Carolina since the early 1900s. The book made its way to the university as part of a collection of Battle’s papers.

Produced by Richmond-based “Foster, Artist and Photographer,” the album was given to as a gift to Battle, who served as president of Carolina from 1876 to 1891.

“We think most of the photos in here were taken in about 1892,” said Patrick Cullom, visual materials processing archivist. “The book itself was put together in 1894, but there are pictures in there that date as early the 1840s.”

With images ranging from the dirt road of Franklin Street and the ramshackle well to portraits of faculty and university organizations, the album portrays a full snapshot of Chapel Hill life in the 1800s.

From Carolina’s archivists, more than just notable landmarks are captured in the scenes. The clothing, technology and landscape are key details that shed insight on the time period.

“You could pore over this thing,” Cullom said. “Each image in here has so much information in it. … I think there’s always more in the picture. There’s stuff that gets captured in there that didn’t seem important at the time, but flash forward a hundred years and its ‘Oh, there’s tree behind that building, but now it’s a parking lot.’ ”

Although the album’s images have been online for years, Cullom recently completed the book’s online finding aid, which showcases the artifact — not just the photos.

A unique aspect of the album is the writing scribbled around the photographs. Written next to a photo of Carolina’s old gymnasium tells the anecdote of “built when public opinion was outraged by ‘dancing on the campus.’ ”

Cullom believes the album was most likely kept in an office to show off, allowing individuals to add their own notes. While this added historical context, it also contributed to the aging of the photos.

“The images are faded, and what that says to me as a photo archivist, is that it was used,” he said. “It was something that was put out for people to look at. You have to think back. This book is neat now, but a hundred years ago it was just a photo album. People put coffee on top of it — it sat in an office. I think that it was kind of ornamental.”

While the North Carolina Collection consists of a variety of documents from the 19th century, the Battle photo album is the only material that captures the campus during that time period in vivid detail.

“I can tell you that there’s people out there playing baseball on a field, and you’re going to bring your preconceived notions of what that might look like, whereas here you see it as opposed to trying to imagine it,” Fletcher said.