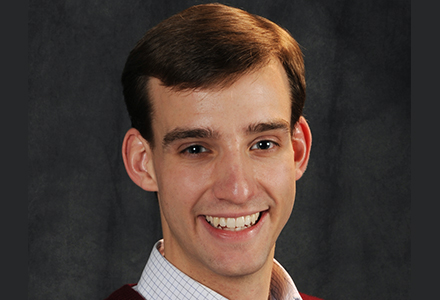 James Williams was 14 years old when he first ventured out of his hometown of North Andover, Massachusetts and halfway across the globe to China.

To the high school sophomore, the Asian country was shrouded in mystery. But its language and culture immediately left a lasting mark on him.

It was on that trip that Williams discovered the passion that would lead him to master Mandarin — and to the University of North Carolina at Chapel Hill to study economics and Chinese language.

“As I was flying out of Bejing, I felt overwhelmingly confident that China would be a part of my long-term plan,” he said. “I gained a lot of clarity that it would be a focus of mine.”

Guided by that plan, the Carolina senior will now follow his passion to England as a recipient of the Marshall Scholarship — an award that provides university fees, cost of living expenses, annual book grants, a thesis grant, research and daily travel grants, and fares to and from the United States.

Williams is one of 40 selected for the award that finances American students to study at a graduate level in the United Kingdom.

“It hasn’t fully sunk in yet — the magnitude of the fact that I’ll be living in England for two years, the fact that I’ll be able to freely study the things that I’m interested in and be apart of this network of really impressive scholars,” Williams said. “I’m sure it will sink in over the coming weeks and it will bring a huge sense of relief, as well as gratitude for being in the position I’m in. I have always been the type to shoot for the stars and landing a competitive scholarship like this is even more than I imagined.”

He is the University’s first recipient of the prestigious Marshall Scholarship in nearly a decade.

“It’s wonderful to see James Williams recognized with the exceptional Marshall Scholarship,” said Chancellor Carol L. Folt. “Few students display the energy and self-discipline that has propelled James in his study of economics and China. I look forward to following his incredibly bright future as a bold leader in U.S.-China relations.”

A Morehead-Cain Scholar, Williams is a Phi Beta Kappa member and a member of the Order of the Golden Fleece — Carolina’s oldest honorary society. He is also the recipient of Carolina’s Phillips Ambassador Scholarship.

Majoring in economics and Asian studies with a Chinese concentration and minoring in mathematical decision sciences, his interest in Chinese culture has served as the core of his education.

Williams began studying Mandarin in ninth grade and has since spent a total of one year studying, volunteering and working in China. As a sophomore at Carolina, he completed an immersion program at the Harbin Institute of Technology in China, and he was awarded the highest level of language certification (HSK 6) by the government of China.

“I never just wanted to be a linguist,” he said. “I knew I needed some sort of addition area of expertise to pair with the fluency of Chinese to be able to have an influence. The study of China was the backbone, and that never wavered.”

That additional skill comes in the form of economics and understanding connections between people of different cultures.

“It fits in really well with the study of China,” he said. “Where China is influencing the world is largely economic.”

Ultimately, Williams aspires to use his language skills, understanding of Asian culture, and grounding in economics to become a diplomat serving as a U.S. policy maker focusing on China and issues of international economics.

“James is one of the most accomplished students I have ever encountered at Carolina, and I am certain he will play an important role in future U.S.-China-Africa relations, “ said Mary Floyd-Wilson, director of Carolina’s Office of Distinguished Scholarships. “The Marshall Scholarship will allow James to further his studies in economics and contemporary Chinese studies. A remarkable scholar and leader, James exemplifies the ambassadorial goals of the Marshall Scholarship.”

While in England, Williams plans to pursue a master’s in Contemporary China Studies at School of Oriental and African Studies, University of London and a master’s in developmental economics at Oxford.

“I’m sure that I will learn a lot through the formal class element and I’ve done that here at UNC, but I’ve always had the mindset of a lot of what you learn can be simply through your environment and the people that you’re around and the educational opportunities that you seek for yourself,” Williams said.