Adriano Bellotti, a current student in the University of North Carolina at Chapel Hill’s School of Medicine, has been awarded the prestigious Gates Cambridge Scholarship, which provides full support for graduate study at the University of Cambridge in England.

Bellotti, 24, a Charlotte native, is among 36 Americans selected for the award from 800 U.S. applicants. He is Carolina’s sixth Gates Cambridge Scholar and its fourth consecutive recipient since 2013. 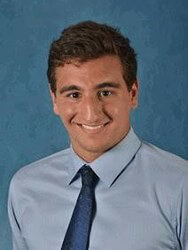 The Gates Cambridge enables academically outstanding students from outside the United Kingdom, with a strong interest in social leadership and responsibility, to pursue graduate study at the storied university.

“It is wonderful to see Adriano selected for this outstanding award that will help him advance his studies in the development and application of mathematical models to create new biomedical engineering solutions leading to breakthrough clinical treatments and technologies,” said Chancellor Carol L. Folt. “I am very excited for Adriano and know his studies at Cambridge will provide an excellent opportunity for him to continue his studies.”

As an undergraduate, Bellotti began to appreciate the pragmatic perspective and mathematical methods of research in biomedical engineering. He sought to apply this empirical approach to medicine, which led him to pursue a combined master’s and doctoral degree program at Carolina.

At Cambridge, Bellotti plans to complete a three-year doctoral degree, studying neurophysiology through computational modeling, specifically neuroplasticity in both single neurons and neuronal circuits. Using this research, coupled with his engineering background and clinical experience, he aspires to lead medical researchers in facilitating the translation of new treatments and technologies into the clinic.

“The Gates Cambridge enables academically outstanding students from outside the United Kingdom, with a strong interest in social leadership and responsibility, to pursue graduate study,” said professor Inger Brodey, director of Carolina’s Office of Distinguished Scholarships. “Adriano’s selection is quite an honor for him as well as for Carolina.”

Established in 2000, the Gates Cambridge Scholarship is funded by a $210 million donation to the University of Cambridge by the Bill and Melinda Gates Foundation.