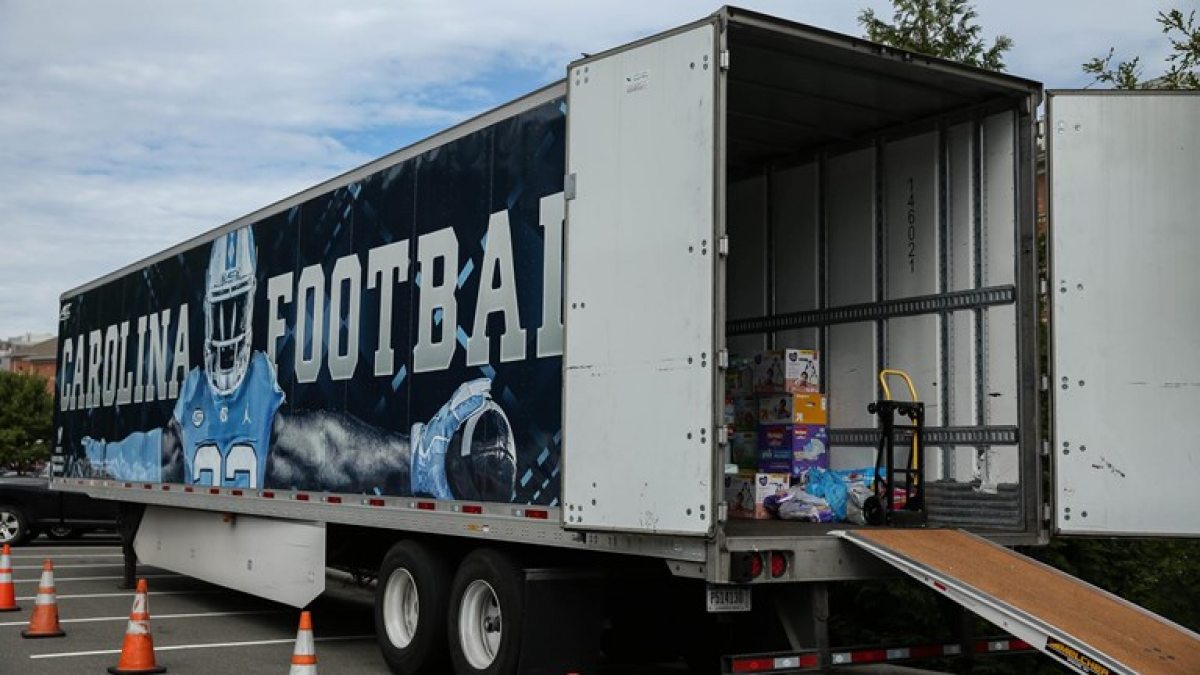 Seeing the destruction caused by Hurricane Florence since Thursday, Larry Fedora started searching for ways the North Carolina football team could support the areas affected by the storm.

So he contacted Bubba Cunningham. And after some discussion, they came up with the idea of using the team’s 18-wheel equipment truck, owned by Marrins’ Moving, to deliver supplies to the hardest-hit locations throughout the state of North Carolina.

Donations, such as non-perishable food items and pop-top canned goods, started being accepted at the Williamson Center parking lot, located directly across the street from the Dean E. Smith Center, on Tuesday morning. Several people had already donated supplies by 11 a.m., when Cunningham, Fedora, Robert Gillespie and seven players arrived.

They brought with them more donations. And for next 30 minutes, they started the process of loading the truck for its first delivery.

“We know there are a lot of people out there who are really hurting right now,” Fedora said. “And this thing is still going. We’re worried about flooding from the rivers cresting and all those things, and there are a lot of people who are displaced and worried about their homes. So anything we can do to make it a little bit easier for them, we wanted to be involved.”

Reddick, from New Bern, started a GoFundMe campaign on Friday to help his hometown, and he asked Fedora for the football program’s support. Fedora discussed that conversation with the team Monday. Subsequently, Brandon Fritts said each player donated $15 to Reddick’s cause.

“We’re just so blessed that we didn’t have anything crazy here,” said Fritts, one of the players who helped deliver and load supplies Tuesday. “Obviously, people in different parts of the state are facing a lot harsher conditions, so we’ve just got to keep them in our prayers and just do anything we can to help them out.”

People may continue to bring items to the Williamson Center parking lot until 6 p.m. Tuesday, from 7:30 a.m.-6 p.m. Wednesday and Thursday, and from 7:30 a.m.-noon Friday. A list of items people should donate can be found here.

The truck is expected to leave Chapel Hill on Friday afternoon for Lumberton, Cunningham said. After that, other locations will be determined, based on what areas the truck can reach.

Several other UNC-Chapel Hill teams are also helping people affected by Hurricane Florence. Cunningham said members of the Student-Athlete Advisory Council have discussed different relief efforts. Among those, he said some student-athletes will be collecting monetary donations at the Kenan Stadium gates before Saturday’s football game against Pittsburgh.

Cunningham said he’s been impressed by how proactive Carolina student-athletes have been with supporting the recovery from the storm.

“We always encourage our students to be engaged in the campus community, and this is an example of that,” Cunningham said. “Our “I Play For” campaign, which we launched this year, also gives our students an opportunity to think about what’s meaningful to them, and to think about the great opportunity they have to participate, get a great education and help others.

“So I’m delighted they’re engaged as much as they are.”

Not everyone knows how they can help when a natural disaster strikes. But Fedora hopes his team can set an example.

“When you have tragedy, it brings people together,” Fedora said. “It doesn’t matter what you have going on in your life, you want to help other people. We have a football game to prepare for, but that’s really not a whole lot when you think about what some of these people are going through.”