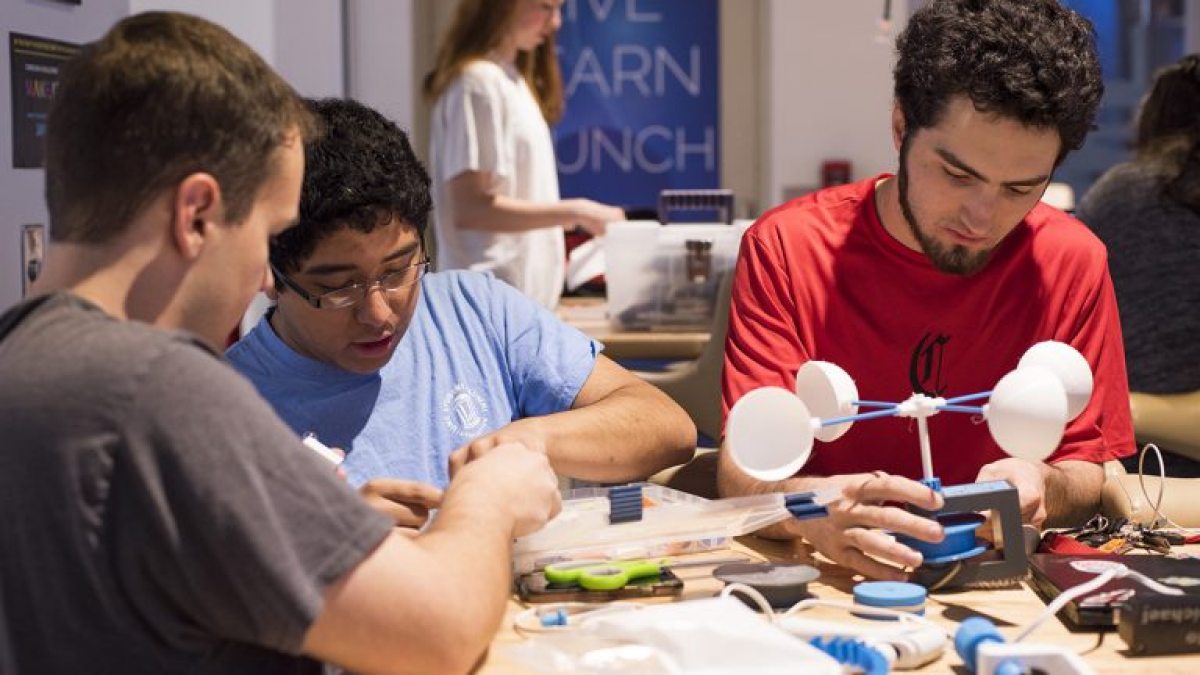 On a chilly Sunday evening when most students were wrapped up in run-of-the-mill weekend routines, Ben Morgan stood in the Kenan Science Library talking about an idea that was anything but ordinary – something that could simultaneously excite environmental advocates and closet neat freaks.

“We’re working on making a compostable shoe,” said Morgan, a doctoral student in polymer chemistry, who explained that old shoes typically aren’t donated to second-hand stores and are major culprits for cluttering closets before they stack up in landfills. “Our idea is that if you’re going to wear your shoes into the ground, turn them into dirt when you’re done with them.”

He was one of 138 students who convened in the library makerspace for the kickoff of the 2019 Carolina Challenge Makeathon, a week-long series of events, workshops and learning sessions designed to bring together Carolina innovators and makers to turn socially innovative concepts into something tangible.

The Makeathon was hosted by the Entrepreneurship Center at the Kenan-Flagler Business School in conjunction with nine campus partners, including Innovate Carolina and the Be A Maker (BeAM) initiative. It’s where students like Morgan, who teamed with senior business major Sarah Smith and biochemistry doctoral student Jeff Ehrhardt, started their week of experiential learning and making. And with 15 workshops, 27 hours of open BeAM makerspaces, 38 hours of app lab sessions and 71 available office hours hosted by 17 entrepreneurial-minded mentors, the chances to learn while building a prototype, designing an app or launching a website materialized quickly.

“We’re excited about all the resources that the Makeathon has for us – not only going to office hours to meet with people who can help us but also the space, training and workshops that we can use and learn from as we build our first prototype,” Smith said.

Many ideas and ways to learn

The number of learning opportunities was only exceeded by the diversity of inventive ideas developed by student teams. Those ideas included:

The diversity of ideas stems from teams constructed with diversity in mind. To participate, each of the 37 teams were required to involve students from at least three academic majors. In total, the Makeathon included students from 47 degree programs.

While some teams worked on building physical prototypes, many others focused on digital designs. One team named Anansi focused on building a website to raise awareness about the large influx of imitation print in Ghana while supporting those who make authentic fabrics.

Mina Yakubu, a sophomore African studies and political science major working on the Anansi team, looked to sessions like the design thinking workshop led by Professor of the Practice Chris Mumford to help develop an effective digital strategy. “I want to use the opportunities throughout the week to build an informed knowledge of who my consumer is and what we’re going to do with Anansi,” said Yakubu. “I think it’s important to be in this community of people with different ideas to be able to learn.”

A new focus on diverse teams and spaces

The sense of community is true to the brand of the Carolina Challenge, which has been made possible by a foundation created by the Stedman family, graduates of the business school. It’s long been recognized by many at UNC-Chapel Hill as a signature campus-wide entrepreneurship event that includes the annual Pitch Party during the fall semester. With its focus on diverse team formation, the involvement of numerous partners and the use of makerspaces and other campus resources, the Makeathon is the latest evolution of the Carolina Challenge.

“The Carolina Challenge has been around since 2005, but we still consider it a startup in the sense that the donors – the Stedman Family – and our Center is constantly gathering feedback from our students to have the competition stays relevant,” said Callie Brauel, Carolina Challenge director. The Makeathon, or Carolina Challenge 3.0, evolved for two main reasons, explained Brauel. It’s designed to use the new innovation spaces that have sprung up across campus, including three makerspaces and an app lab. And it’s more focused than ever on engaging students from all disciplines to help them develop an entrepreneurial mindset.

“The new innovation spaces have the resources that enable students to actually build out a physical or digital prototype, which is a huge part of the entrepreneurial process,” said Brauel. “And working on diverse teams is not only a great learning experience but also a way to better prepare students for careers post-graduation. In terms of pulling this off with the different spaces, skillsets and resources that were brought to the table, this was truly a cross-campus collaboration and would not have been possible without all nine partners.”

A new focus and format for the event is key to staying in sync with the collaborative learning experiences that students are looking forward.

“There’s a longing on campus for collaboration and direct ways for students to find teammates with diverse skills who are passionate about solving the same problems they are,” said Aspyn Fulcher, program manager of the business school’s Entrepreneurship Center, and a principal Makeathon organizer. “Our main goals were providing opportunities for students to be creative, interact with students from different majors, gain exposure to other student projects, and learn about the wealth of on-campus resources available to them as student entrepreneurs.” The culmination of the Makeathon is a final pitch competition where the student teams compete for $10,000 in prizes that they can use to take their ideas a step further.

“The hope is that ideas become businesses or products that are developed and followed through on,” said Rick Bradley, associate director of Carolina Housing, a Makeathon partner that houses the Blue makerspace in Carmichael Residence Hall. “We’re hoping that this is an incubator of ideas that allows startups to occur. You can tell that the students are really excited about being a part of this.”