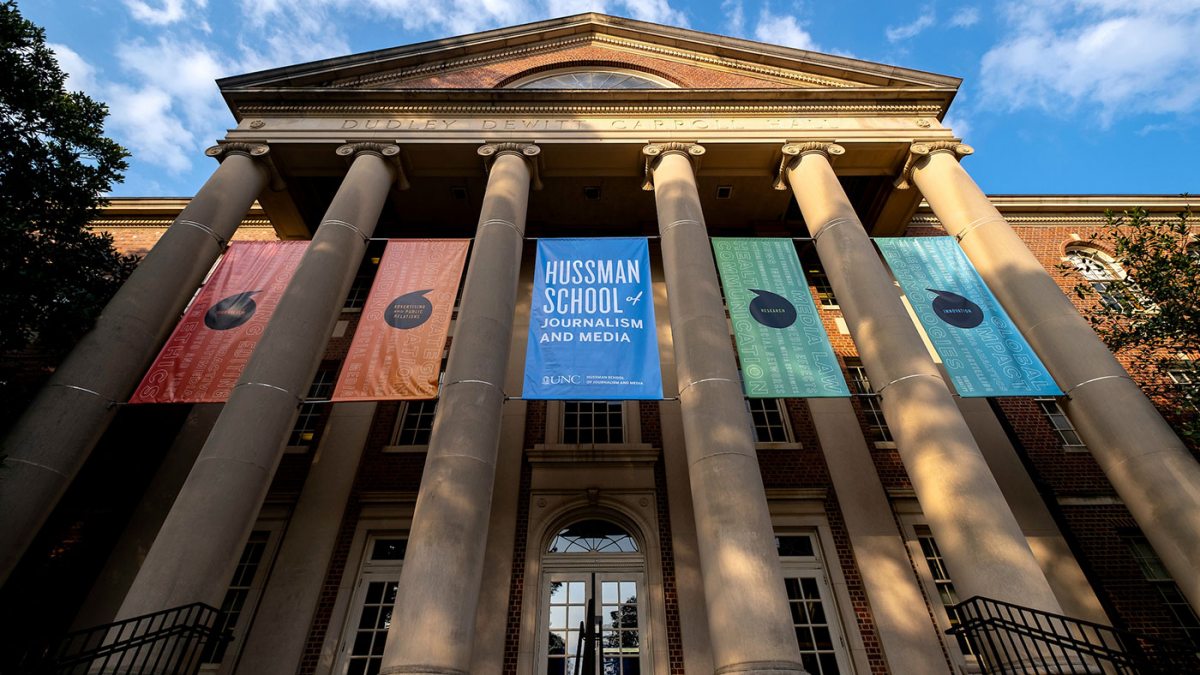 The nation’s most prestigious student journalism award has once again distinguished the UNC Hussman School of Journalism and Media as a national leader.

The students representing the school in the individual finals competitions are Lucas Pruitt in multimedia, Annabeth Poe and Jared Weber in radio, and Cambria Haro and Payton Tysinger in television. The finalists advanced from a record 1,396 entries received in this year’s 14 monthly competitions.

The individual championship competitions, consisting of assignments selected by Hearst judges, will be held virtually this week.

“Careers are made with Hearst Awards. This strong group of 2020 Hearst winners have earned the national spotlight.  They follow in a long tradition of Hussman grads who have built strong careers with the confidence learned in this competition,” said Susan King, dean of the school. “The natural talent of these students is coached, mentored and challenged by our faculty, and that is what makes the difference.  Faculty like Charlie Tuggle, Pat Davison, Chad Heartwood, Adam Hochberg, Paul Cuadros, Kate Sheppard and John Robinson,who invest their best so that our students can be the best.”

Often referred to as the “Pulitzers of college journalism,” the William Randolph Hearst Foundation holds year-long competitions in writing, photojournalism, radio, television and multimedia for journalism undergraduates. The awards program was founded to foster journalism education through scholarships for outstanding college students. Since its inception, the program has distributed more than $13 million in scholarships and grants for the best work by student journalists.

“In the absence of prominent national rankings for media and journalism schools like the US News & World Report’s annual rankings of universities in which Carolina always places near the top for public universities, one important measure of our school’s leadership position is our students’ performance in national competitions,” said Stembler Distinguished Professor Charlie Tuggle, the school’s senior associate dean for undergraduate studies.

For the finalists, the selection was just as personally meaningful.

“I never thought anything like this would happen to me,” said Pruit. Pruitt, who grew up in a small North Carolina town and taught himself photography and filmmaking, looks back on his choice to attend UNC Hussman as a pivotal moment. “Thinking about how different my life would have been, I’m so glad I joined the program here,” he said. Citing faculty like Pat Davison who helped him grow as a filmmaker, he added, “I came in thinking I knew everything because I was self-taught, but I was amazed at how much I learned.”

Faculty member Chad Heartwood encouraged Pruitt to apply to the Hearst competition based on projects reflecting his love of mountain biking. Pruitt put together his multimedia Medium page over a 24-hour period after learning about the competition while he was away at a Bible study camp. No matter what happens next, Pruitt says, “getting this far is the greatest accomplishment of my life.”

Radio finalists Weber and Poe, both May 2020 graduates, also highlighted their mentors and the UNC Hussman community.

“I’m so honored to be a finalist for Hearst,” Weber said. “I’m also really grateful to the professors at Hussman for teaching me how to tell stories like them, and for fostering an environment where students support each other.” Weber particularly credited faculty members Paul Cuadros and Adam Hochberg for their support.

Weber and Poe both worked on Carolina Connection, UNC Hussman’s student radio broadcast, during their time at the school.

Poe cited the show and its faculty mentorship as transformational for her journalism career.

“Under the direction of Adam Hochberg, I learned how to create a full radio show from the ground up,” she said. “I constantly felt supported to explore different aspects of radio as I was able to report, produce and anchor the show.”

Poe was working on Carolina Connection when she found out that she would be a Hearst finalist. She called her family with the news, a conversation she said was filled with tears of joy on both sides. She credits two sources of encouragement in her career at the school: Hochberg, whose “guidance and advice has been instrumental in shaping me as a reporter,” and her UNC Hussman peers. “It was an incredible honor to learn with them and from them over the last four years,” she said.

UNC Hussman hit another milestone in the television category, with first-place finalists in both features (Haro) and hard news (Tysinger), which has not happened before in the same year. Both were students in faculty member John Robinson’s Media Hub course.

Haro, who graduated in December 2019, was highlighted by the Hearst competition for her work about Peter Norton, a storyteller whose ability to speak was affected by a brutal attack, and Alexis Nye, an audiology student who was born deaf. Haro said she didn’t tell the stories for the awards, but Hearst is a special recognition.

“To me, being a finalist in the competition just means I did something right,” Haro said. “It brings me confidence in my ability to tell a story. Peter Norton and Alexis Nye are remarkable people who made their stories worth telling. I’m just happy I got to be the person to make it happen.”

Tysinger’s Hearst entries reflected his interest in creative documentary filmmaking and current events. His stories profiled the aftermath of Hurricane Dorian in the Bahamas and the declining population of red wolves in North Carolina.

Tysinger also reflected on the influence of Media Hub and Robinson. “He encouraged me to think outside the box of what traditional journalism is,” Tysinger said. He added that he was also grateful to Tuggle, who “really invested in our stories … providing me more opportunity than I ever imagined I would have.”

Like Pruitt, Tysinger said that he didn’t imagine competing on this level while he was growing up in Lexington, North Carolina. “I’m humbled and I kind of don’t believe it and don’t know how to acknowledge it,” he said.

Poe summed up many of the students’ aspirations for this week’s competition. “I feel so incredibly grateful that I was given the opportunity to participate in the competition and hope that I can continue to make my family, my community and my university proud.”

Poe needn’t worry. All of the thirty students who took part in this year’s Hearst competition have already made the university and the entire UNC Hussman community proud.