The men’s basketball team may have finished second overall in the NCAA Tournament, with a 72-69 loss to the Kansas Jayhawks on April 4. But the hundreds of fans who turned out for the team’s return from New Orleans the next day showed that the Tar Heels are still No. 1 in their hearts.

Davis thanked the fans for their support throughout the year and expressed his pride in his team. “My hope is that we represented this University, this program, at the highest level on the court, in the classroom, in the community,” he said in his brief remarks. 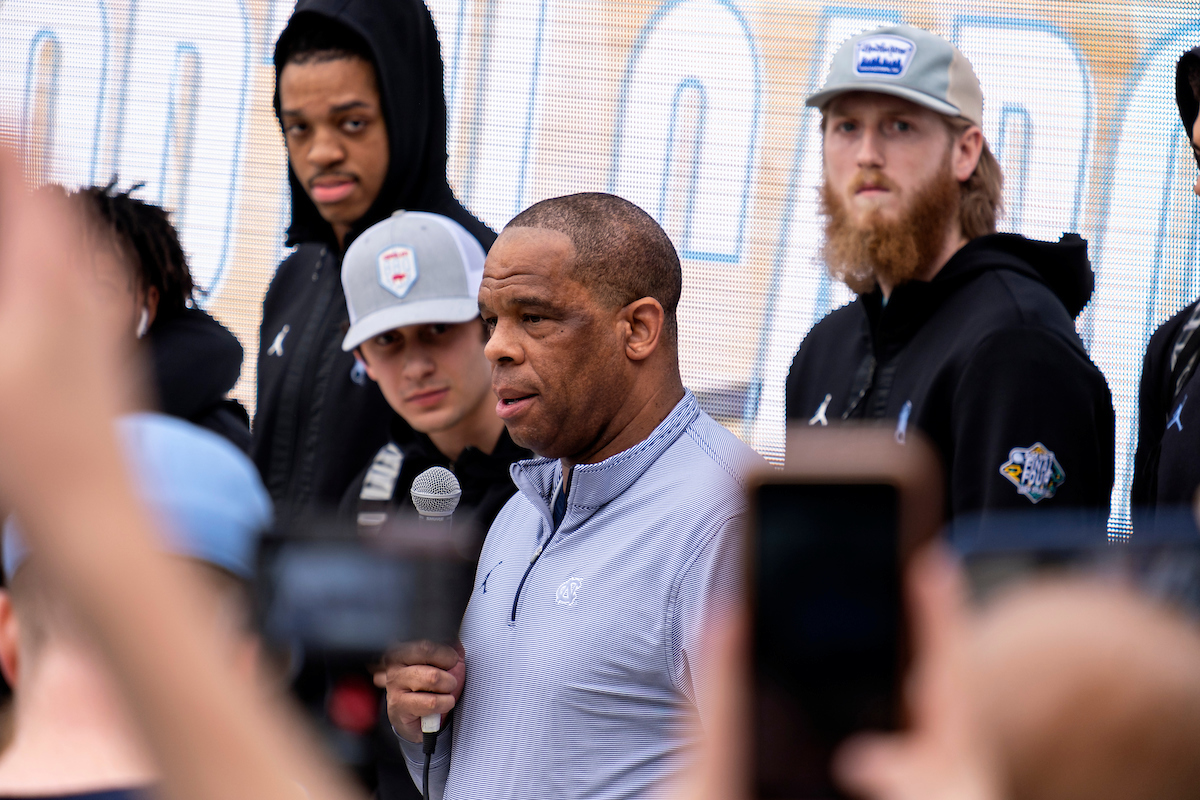 Coach Hubert Davis addressed the gathered fans during the welcome back on April 5. (Jon Gardiner/UNC-Chapel Hill)

Hours before the team arrived, Jada Williams stood in Lettermen’s Lane at the Smith Center, wearing a T-shirt and holding a poster, both of her own design, featuring photos of player Caleb Love. “I love Caleb,” declared Williams, a sophomore at North Carolina Central University. “I’ve been a fan since I learned how to talk. They are the best team.”

In a reversal of last week’s sendoff event, fans and media stood on the sidewalks surrounding the Dean E. Smith Center, waiting for the buses bringing the team home from the airport. A team photo loomed larger than life on the outside video board display until 3:11 p.m., when it was replaced with live footage from the buses being escorted down Interstate Highway 40.

While they waited, the fans recalled the scrappiness of the 2022 Tar Heels and the leadership of Davis, only the fifth head coach to reach the title game in his first season.

“They came a long way and beat a lot of very good teams,” said second-grader Gray Perry, whose family drove up from Charlotte for the welcome. His parents thought that showing the family’s support for the team after the loss would be a good “life lesson.”

“I watched Hubert Davis as a player,” said Justin Perry, a social worker in private practice and UNC School of Social Work alumnus. “I really appreciated the resilience of this team. I wanted them to feel supported and loved.”

When the team buses pulled up on Skipper Bowles Drive, fans began the call and response “Tar Heel” chant and raised their smartphones to record the moment. When Coach Davis emerged, the chanting switched to “Hubert, Hubert.”

Davis returned the love in his remarks. “We love seeing you guys out here,” he told the crowd. “It’s putting a smile on our face.”