Two hundred million years ago, before birds existed, or bees, or wildflowers, molten rock seeped into cracks below the surface of what’s now Durham, North Carolina. The North American and African continents, whose union had created the Appalachian Mountains, were slowly pulling apart. In their wake, they left rifts that filled with sand and silt washed down from eroded mountaintops, eventually forming low basins of sedimentary rock. But the molten rock oozing in from below was entirely different in composition: it solidified into a hard igneous rock called diabase that has more in common with the dark, volcanic basalts of the ocean floor than the surrounding sandstone and siltstone.

Fast forward to recent millennia, and the Eno River’s path from northern Orange County to the Neuse River hits that rock head-on. Taking the path of least resistance, the river flows around the diabase intrusion, maneuvering through the softer rock that surrounds it. The result is Penny’s Bend, a peninsula surrounded on three sides by the Eno River.

It’s more than just a striking geological formation: the diabase rock weathers into soil unlike almost any other in North Carolina. It’s mafic (has a high pH) and is richer in iron, magnesium, and calcium than many other native plants in our area can tolerate. It tends to create shrink-swell clays that harden the soil practically into concrete in summer, with little water available for plants, while in winter, the ground is gooey and swells when wet. As a result, Penny’s Bend harbors highly rare plant species that evolved to live specifically in these stressful conditions. Some of the rare species at Penny’s Bend include: 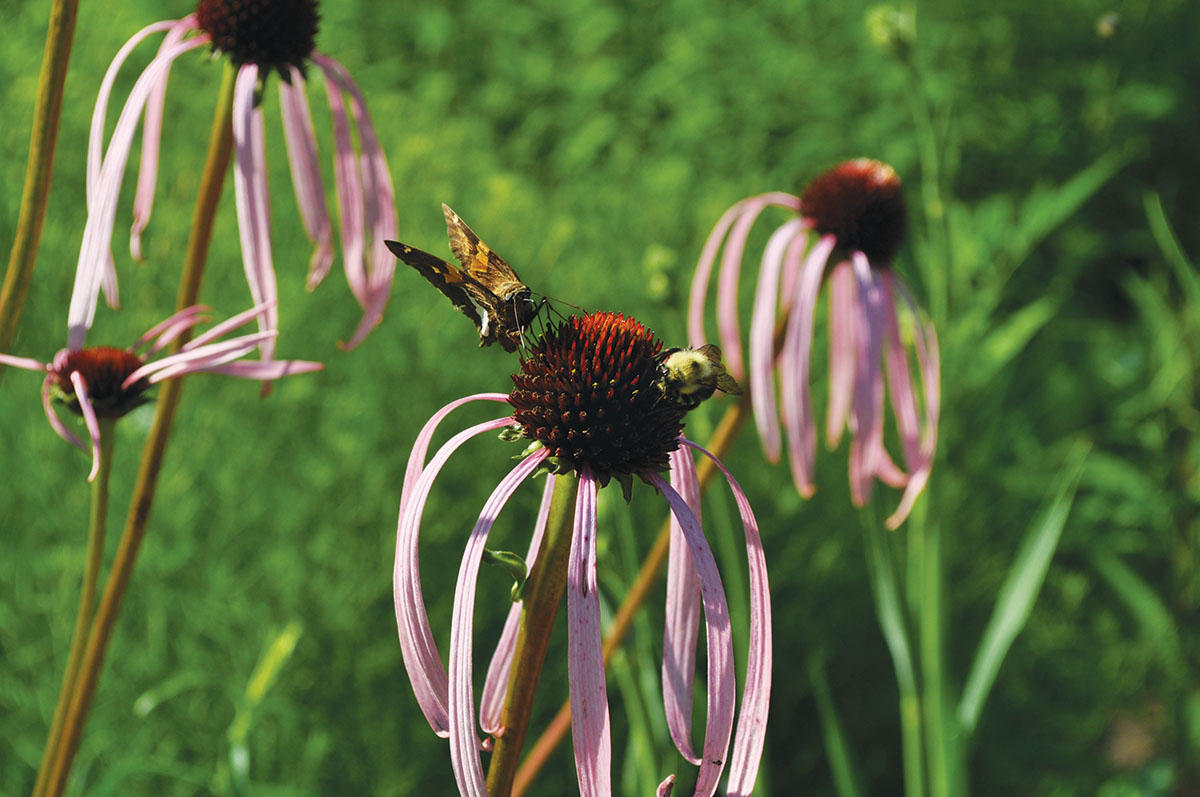 In addition to the troublesome clay soil, natural wildfires helped keep the upper meadows at Penny’s Bend clear of large shrubs and trees so these wildflowers could thrive. At various points, the Occaneechi, Shakori and Lumbee Tribes occupied the land that is now Penny’s Bend, and we can guess they hunted on the land. When Englishman John Lawson traveled to Occaneechi Village (near present-day Hillsborough) and the Shakori village of Adshusheer (near present-day Durham) in 1700, he described meals of bear and venison, hot bread, and fowl. And though the Occaneechi farmed corn, beans, and squash, the difficult soil at Penny’s Bend means it’s unlikely it was ever used to grow crops.

Penny’s Bend spent much of its time under English settlers as a pasture for grazing cattle and horses. In the 19th century, it was part of the Bennehan-Cameron family’s massive landholdings, which included over 30,000 acres in four counties and the famous Stagville plantation. Over the years, the family enslaved thousands of African Americans to work their land; Paul Cameron bragged that he “had nineteen hundred of them once.” While Penny’s Bend probably didn’t undergo the tobacco and wheat farming typical of the Camerons’ properties, the family built a grist and sawmill along the Eno at the edge of Penny’s Bend that has since been destroyed. (The origin of the name Penny’s Bend is unknown, but it was probably the Camerons who named it – it first appears in a map Paul Cameron commissioned of his land holdings in 1890.)

Through the mid-20th century, other landowners grazed cattle and raised and trained quarter horses at Penny’s Bend. The property might have met a typical fate of subdivision and development were it not for the creation of the Falls Lake reservoir in the late 1970s. Penny’s Bend met enough of the requirements for protection of nearby properties that the Army Corps of Engineers, charged with creating the lake, purchased the land outright.

Shortly after, they leased the property to the State of North Carolina, who subleased it to the North Carolina Botanical Garden Foundation. For over 40 years, the Garden has managed Penny’s Bend Nature Preserve with a directive to protect rare plants and wildlife habitats; preserve the site’s availability for non-intrusive recreation; and provide an accessible example of in situconservation in an urbanizing environment. This last goal is of particular interest.

The federal ownership of Penny’s Bend provides a unique opportunity for protecting its rare plantsin situ, or on the site where they live. Other nearby pockets of diabase rock that harbor similar species have been paved or grown over on private property. In the late 1980s, Garden curator Rob Gardner gathered plants of smooth purple coneflower and hoary puccoon destined for destruction along Wanderlust Road, which abuts Penny’s Bend, and planted them in the preserve. In 1993, Gardner and staffer Darrin Perrey propagated additional smooth purple coneflower plants from seed for the site.

When you’re restoring a plant so rare it only grows in a few sites in the entire world, a preliminary hurdle is figuring out how best to reestablish it. With funding from the National Fish & Wildlife Foundation, the Garden’s conservation department was able to propagate and plant 575 smooth purple coneflower seedlings and 1,000 seeds at Penny’s Bend in 2007. By tracking the success of seedlings and seeds in different plots across the preserve, they learned lessons that have since been applied to smooth purple coneflower reintroduction projects elsewhere.

More intensive land management was long on the agenda for the Penny’s Bend Management Advisory Committee, which to this day includes staff from the Garden, the North Carolina Natural Heritage Program, the North Carolina Plant Conservation Program, the Eno River Association, the US Army Corps of Engineers, and local botanists. They conducted the first prescribed fire in the meadow around 20 years ago to mimic the natural wildfires that had been suppressed for centuries. More recently, they have begun addressing the southern slope, which had become overgrown with loblolly pines.

Originally a wetland tree of the Coastal Plain, the loblolly pine is not technically native to the Piedmont of North Carolina. Fire suppression, clearing land for development, and the creation of tree farms have enabled its spread across the Southeast (and made it the second-most plentiful tree in the United States, after red maple). Where they take over, they block sunlight to the forest floor, preventing native wildflowers and grasses from growing. Accordingly, removing the loblolly pines from the southern slope of Penny’s Bend and sowing in their place locally harvested native seed was on the Penny’s Bend management plan for over 15 years.

In 2020, a forester was hired to clear the loblolly pines, an effort that was not without some initial controversy. “Logging operations are never ‘pretty’ – including those for ecological restoration,” said Johnny Randall, director of conservation programs at the North Carolina Botanical Garden. Staff arrived on site one day to find some logging equipment had been tampered with, ostensibly by visitors unhappy to see the downed trees.

But by summer 2021, the slope, cleared and prepared by burning, was ready for planting. Duke University Environmental Management master’s student Lydie Costes led an effort with the Garden’s conservation department to plant 800 seedlings of prairie blue wild indigo in the newly sunny area. By studying how well different plots of seedlings survive, her work will inform future plantings and restoration efforts.

In fall 2021, Garden staff and volunteers, Eno River Association volunteers, Duke University graduate students and NC Plant Conservation Program staff came together to plant seeds and seedlings of around 23 matrix species on the southern slope. These more common native wildflowers and grasses will form the basic backdrop of a Piedmont savanna, where the site’s rare wildflowers can thrive. By spring 2022, the Garden’s conservation department will have planted around 6,000 seedlings and several seed plots, thanks to funding from the Burt’s Bees Greater Good Foundation.

Where did all these plants come from? The staff of our Native Plant Materials Development Program have been hard at work collecting seeds and propagating new plants for restoration efforts around the state. For this project, they have grown new seedlings from seeds collected at Penny’s Bend specifically.  This fortifies the natural genetic diversity of the site and ensures the new plants are the right ecotypes —forms of a species that have evolved to live in a particular habitat.

Some of the native grasses and wildflowers Garden staff have grown for and planted at Penny’s Bend include:

Looking ahead, management efforts will focus on maintaining these new plantings: using prescribed burns to keep the site clear and removing invasive plants who might otherwise have a field day in the newly open soil.