Roy Williams’ Last Lecture had a distinctly flash mob vibe. At first, the April 19 talk was going to be on Zoom only, then a message from the General Alumni Association that afternoon directed attendees to an evening event that was now exclusively in-person. And without chairs.

Those who arrived early for the 7 p.m. talk spread out blankets on the Morehead Building’s west lawn and brick courtyard. They huddled in sweatshirts and quilted jackets in the unseasonably chilly air, taking out their phones to direct other seniors to the place.

“Go past the Old Well and then straight,” one senior told a friend. “We’re sitting in the front.”

The unintentionally stealth gathering seemed somehow appropriate for the former Tar Heel head coach. Williams had departed without ceremony a year earlier, the only clue to his April Fool’s Day retirement announcement the parting kiss he gave to the Dean E. Smith Center basketball court after his last home game, a victory over Duke.

“I’ve got a lot of sayings,” Williams warned the crowd, which swelled to about 400 before he began to speak.

The Last Lecture tradition began at Carnegie Mellon in 2007, when professor Randy Pausch gave a special talk after he learned that his pancreatic cancer was terminal.

At Carolina, a speaker selected by the senior class gives the Last Lecture during Senior Week as an informal talk based on the premise, “If you knew this was the last lecture you would ever give, what would you say?”

In his talk, Williams repeated a theme from the keynote address he gave the Class of 2020, when they celebrated their pandemic-postponed Commencement in fall 2021: “Be led by your dreams, not pushed by your problems.”

But he also used the Last Lecture to share joyous and painful moments from his life and the inspirational sayings related to them. Most of them involved hard work, also the title of his 2009 autobiography. 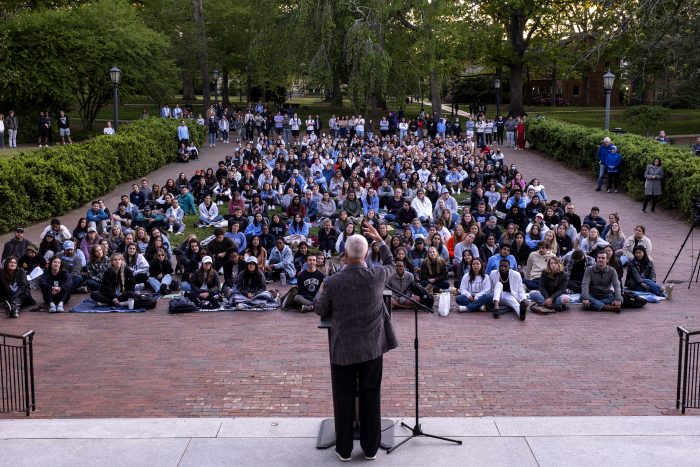 About 400 people came to hear Williams deliver the Last Lecture to the Class of 2022. (Jon Gardiner/UNC-Chapel Hill)

Williams told the seniors how he knew he wanted to become a coach because he had a high school basketball coach who said good things about him. He talked about how much Carolina meant to him because he was the first in his family to go to college, that both his parents had to quit school to go to work.

“Wanda and I have been very supportive of the Carolina Covenant because I wish they had that when I came to school here,” he said. Last year, Williams and his wife, Wanda, gave $3 million to Carolina scholarships, with half of the funds dedicated to the Carolina Covenant, which enables low-income students to graduate debt-free.

Not long after he graduated, he was a part-time assistant coach making ends meet by selling men’s basketball season schedule posters with photos of the players. “I drove 9,000 miles, sold 10,500 calendars in nine weeks, and made $2,400,” he said. “I was the best dadgum calendar seller you ever saw,” he said.

But he stuck with coaching basketball because he loved it so much, eventually racking up 903 victories, three NCAA national championships and a place in the Basketball Hall of Fame. He passed along career advice from the country music song “Buy Dirt”: “Do what you love but call it work.”

He talked about loyalty and urged them to maintain friendships with what he called “foxhole buddies.” His foxhole buddies include Wanda, his wife of 48 years, four friends from North Carolina and three friends from Kansas. The North Carolina buddies stuck by him in 2000 when he decided to remain the head coach at the University of Kansas because of a promise he had made to the players he recruited there. And after he announced he was returning to Carolina in 2003, the Kansas buddies stuck by him — unlike the folks at a Kansas barbershop who put his picture over the commode.

A recurring theme in his talk to the “kids” — “and when you’re 71, everyone is a kid” — was to live without regret. When they are celebrating their graduation in May, he will be observing his 50th college reunion. “Don’t say, ‘I wish I had done that,” he urged them. “Think about it and do it.”

One of his favorite retirement presents was a set of three dozen Titleist golf balls printed with the numbers 9, 3 and 00. At first, he thought the giver had gotten the numbers for his total victories wrong. “We won 903 games, not 9,003,” he protested.

But the giver had his own reasons for the numbers he selected. “Nine Final Fours, three national championships and double zero regrets,” Williams recalled. “I thought that was pretty damn good.”