While they were still studying for finals, wrapping up their coursework and saying their goodbyes, graduates also celebrated their years of hard work and diligence at graduations across campus.

Chancellor Kevin M. Guskiewicz joined the festivities by attending several graduations, including the Carolina Latinx Center’s Éxitos and the American Indian Center’s ceremony, to celebrate with the students. 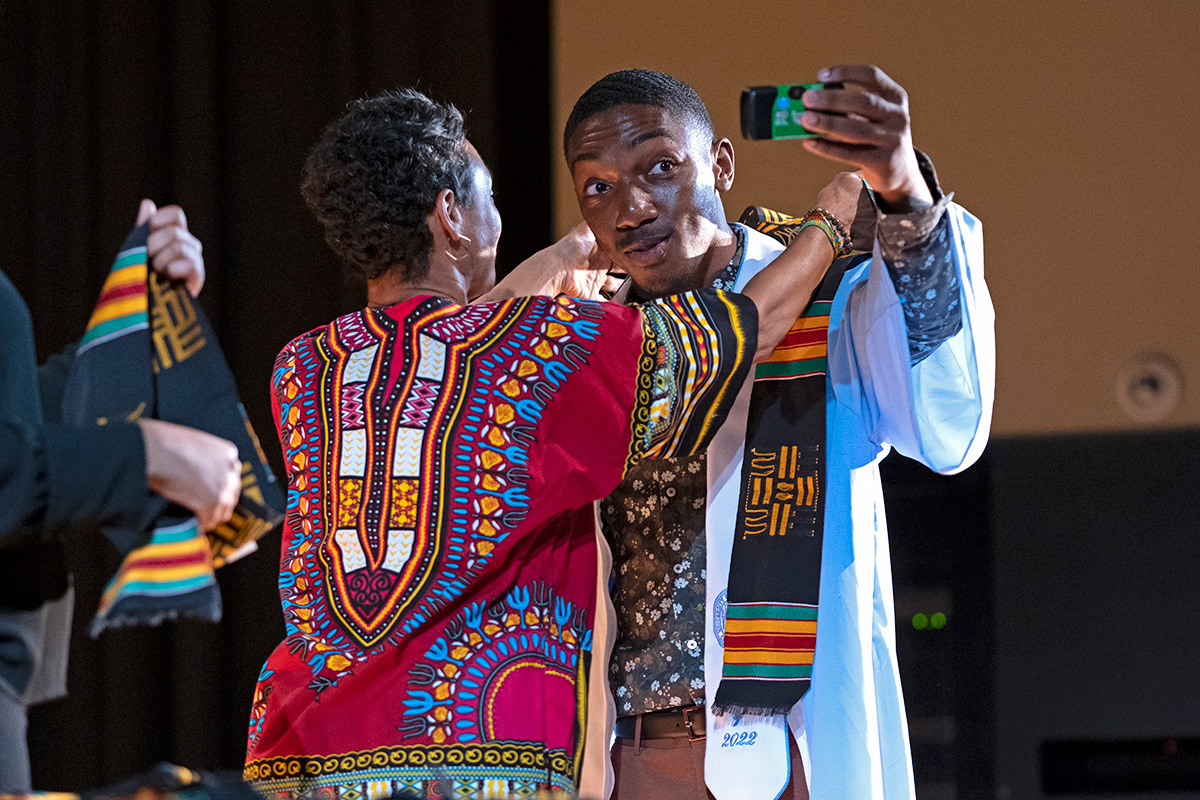 A graduate takes a selfie during the Black Student Movement and the Carolina Black Caucus graduation on May 4. (Jon Gardiner/UNC-Chapel Hill)

On May 4, the Black Student Movement and the Carolina Black Caucus hosted a graduation ceremony to recognize Black students’ achievements at Carolina. The ceremony, held at the Stone Center, was called Umoja, the Swahili word for “unity.” During the graduation, students received red, green and yellow graduation stoles.

In addition to Guskiewicz, the graduates were joined by Vice Provost for Equity and Inclusion and Chief Diversity Officer Leah Cox and Dawna Jones, the former chair of the Carolina Black Caucus and UNC-Chapel Hill’s former assistant dean of students.

“Each of you has overcome challenges, and you’ve worked hard and made it to this day,” Guskiewicz said to the graduates. “It hasn’t been easy, but through the pandemic, you have persevered. … We are so proud of you for what you’ve accomplished and can’t wait to see what you’re going to accomplish in the years ahead.”

Guskiewicz told the graduates they had made a significant, long-term impact on Carolina through their activism and work on campus and in the community.

“I’ve been so grateful to each person in this room for how you’ve continued to push this University to be a more welcoming and inclusive place,” he said. “It was helpful hearing your voices — the voices of the Black Student Movement and other campus leaders that speak on behalf of our campus community and on behalf of our underrepresented students.”

Before leaving UNC-Chapel Hill to serve as the director of the Mary Lou Williams Center for Black Culture at Duke University, Jones worked closely with many of the graduates during their years at Carolina and reflected on their growth over the past four years.

“You all have had to overcome some of the most challenging times, and you have succeeded. You should be proud of that,” said Jones, who served as the event’s keynote speaker. “I’ve had the privilege to watch you all grow into the fantastic human beings that you are before us today, and I’m so proud of ya’ll.”

Jones urged the graduates to build community wherever they go and to stay in touch with the community they built in Chapel Hill. 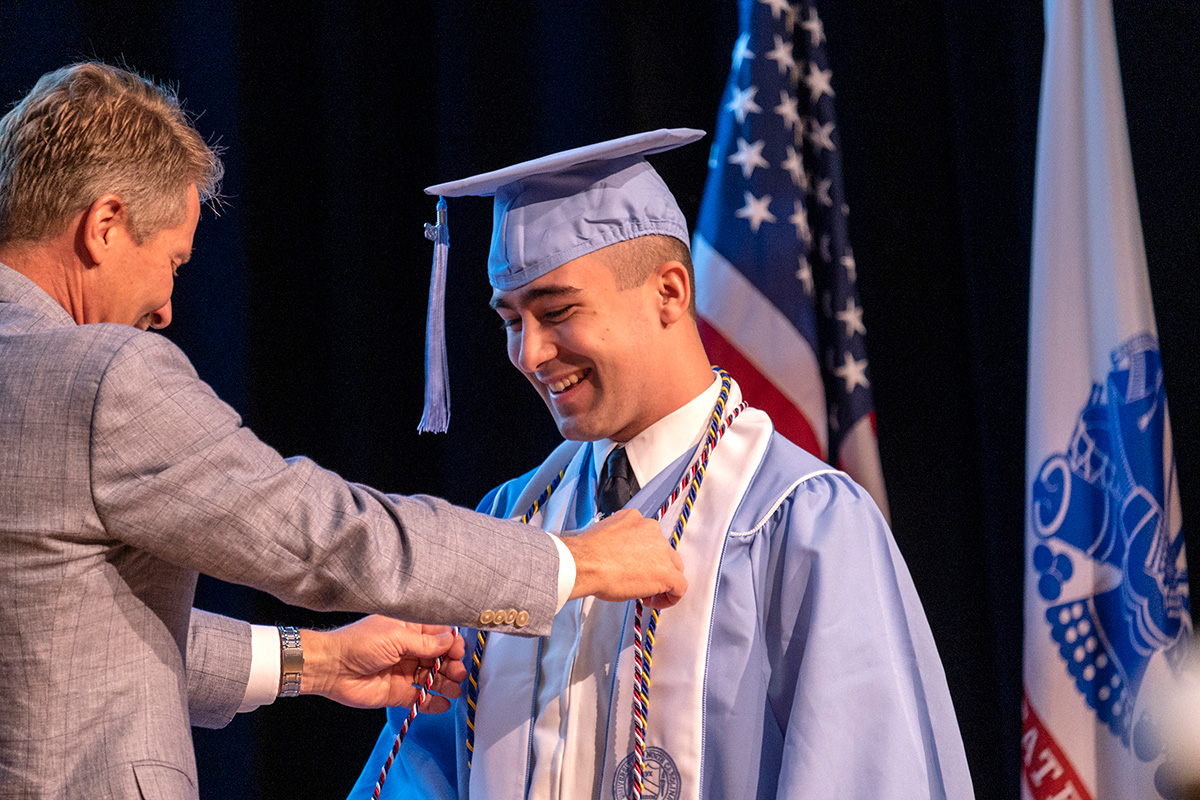 Chancellor Kevin M. Guskiewicz puts a graduation cord on a student at the Red, White and Carolina Blue graduation on May 6. (Jon Gardiner/UNC-Chapel Hill)

Later in the week, Guskiewicz and Board of Trustees member Perrin Jones joined Carolina’s graduating military-affiliated students at the eighth annual Red, White and Carolina Blue Commencement. The students, the chancellor said, are continuing a long legacy of Tar Heels serving our country.

“This special ceremony connects you with Tar Heels who have served our nation for years,” Guskiewicz said at the ceremony May 6. “From William Davie, a general in the Continental Army who founded the University of North Carolina in Chapel Hill in 1789, to now, Tar Heels have answered the call.”

Graduating students received a red, white and blue honor cord to acknowledge their military service and academic success at the ceremony. Collin O’Donnell ’20 and graduating Tar Heel Kailyn Stiffler also spoke at the event, thanking the support systems they had as students for helping them reach this milestone.

“I am blessed to be where I am today. It is thanks to our Carolina community— our friends, our family, our commanders, our NCOs — that we can stand here today,” said Stiffler, who will be commissioning into the Air Force as a second lieutenant. “You have given us the opportunity to serve and to learn. On behalf of everyone graduating here today, I wanted to say thank you for getting us here.” 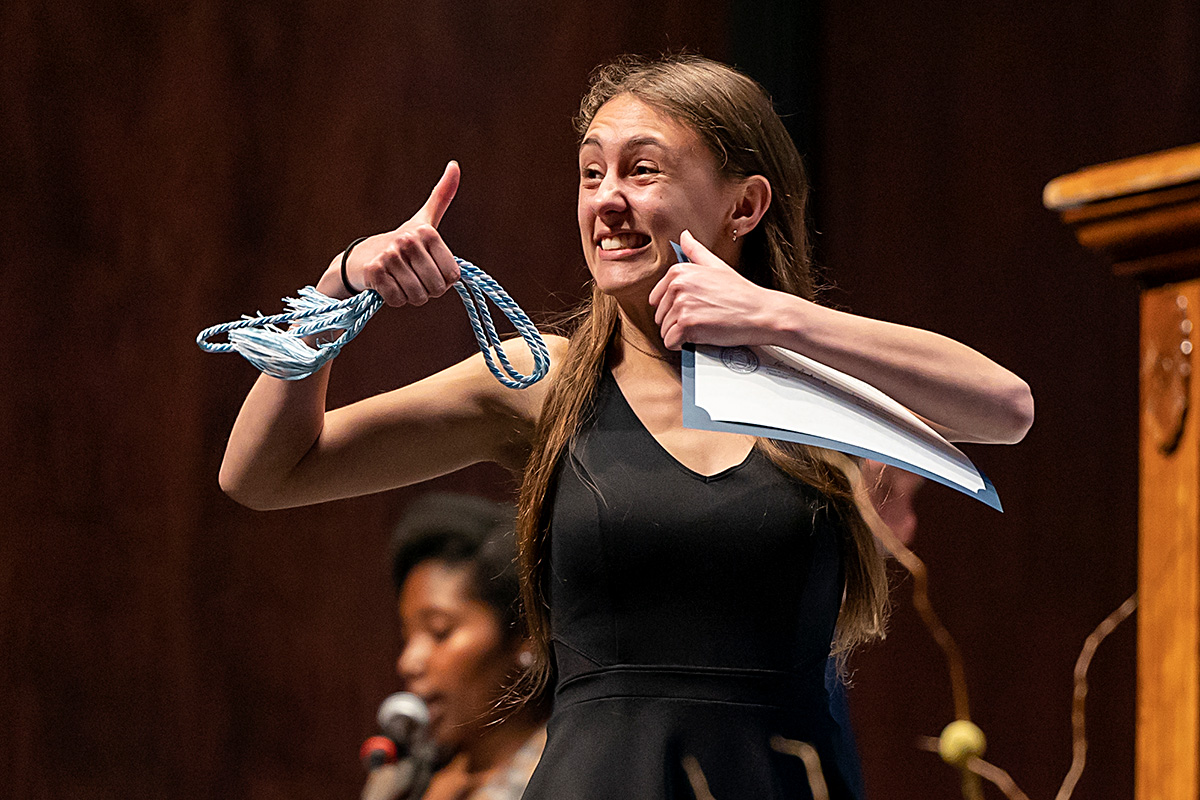 A graduate walks across the stage with a graduation cord during the Buckley Public Service Scholars ceremony May 6. (Johnny Andrews/UNC-Chapel Hill)

That evening, the Buckley Public Service Scholars celebrated its 18th class of scholars during a graduation ceremony at Memorial Hall.

Based out of the Carolina Center for Public Service and funded by the Walter White Buckley Jr. Endowment, the Buckley Public Service Scholars program provides undergraduate students with the framework to engage with local communities through service and connect their academics to giving back.

The graduating class of 202 Buckley Public Service Scholars dedicated a combined 96,000 hours to serving others during their Carolina career. Nearly 90% of those service hours benefited North Carolina. The scholars received a Carolina blue and white chord to represent their achievements at graduation.

“Since Carolina opened its doors as the nation’s first public university, service has been a focal point of our mission,” he said. “Students, faculty, staff and community partners work together with a common purpose of connecting with the community and creating change, and that change is transformational for students. The collective power of the individual can be seen in all of the ways each of you make a difference. The work you engage in touches North Carolina’s counties, as well as many communities throughout our nation and around the world.”

Guskiewicz said their efforts is a representation of the University’s mission.

“I’m so proud and deeply moved by the impact of students, faculty and staff who give back to our state and the world. You epitomize that commitment to service every day,” he said. “It has been a privilege to be a part of your journey.”