Scientists at the University of North Carolina at Chapel Hill, led by faculty-graduate student team Sheila Kannappan and Mugdha Polimera, have found a previously overlooked treasure trove of massive black holes in dwarf galaxies that offer a glimpse into the life story of the supermassive black hole at the center of our own Milky Way galaxy. The Astrophysical Journal published these findings on May 24.

“The black holes we’ve found are the basic building blocks of supermassive black holes like the one in our own Milky Way,” Kannappan said. “There’s so much we want to learn about them.”

“This result really blew my mind because these black holes were previously hiding in plain sight,” Polimera said. “Black holes are a fascinating topic. … But there’s still the lingering question: Where do such supermassive black holes come from? Our work is a teeny step closer to answering that question.”

“Just like fireflies, we see black holes only when they’re lit up—when they’re growing—and the lit-up ones give us a clue to how many we can’t see,” she said.

The research, funded in part by the National Science Foundation, used data for galaxies in two international surveys that Kannappan leads — REsolved Spectroscopy Of a Local VolumE (RESOLVE) and the Environmental COntext Catalog (ECO) — to assess the presence of these growing black holes. These surveys include ultraviolet and radio data ideal for studying star formation; most astronomical surveys select samples that favor big and bright galaxies, but Kannappan’s surveys are complete inventories of large volumes of the present-day universe in which dwarf galaxies are abundant.

Kannappan and her undergraduate research students realized that spectroscopic data used to assess the presence of a growing black hole would often be ambiguous in the same specific way for dwarf galaxies. These galaxies were typically thrown out of surveys and the ambiguity was ignored. But this ambiguity piqued Kannappan’s curiosity. She suspected that taking into account two typical properties of dwarf galaxies – their mostly primordial elemental composition (mainly hydrogen and helium) and their high rate of forming new stars – might resolve the ambiguity in favor of the presence of a growing black hole.

An astrophysics professor at Elon University, Chris Richardson, provided theoretical simulations that confirmed this suspicion: The observed ambiguity is exactly what the simulations predict for a primordial composition, highly star-forming dwarf galaxy containing a growing massive black hole. The final step in the research involved Polimera’s search for galaxies in the surveys that exactly matched the criteria—resulting in the finding that growing, massive black holes are more common in dwarf galaxies than previously thought.

The inability to see a black hole contributes to the complexity of studying them. Instead, scientists must observe black holes based on activity happening around them, such as consuming matter from around them by way of gravitational pull. However, this type of black hole activity can be hard to disentangle from similar activity from bright, young stars.

“We all got nervous,” Polimera said. “The first question to my mind was: Have we missed a way in which extreme star formation alone could explain these galaxies?”

The answer was a resounding no.

“We’re left with this result that is shocking,” Kannappan said. “Mugdha did a masterful job with the data … She has exhaustively researched every other possible explanation,” Kannappan said of the findings. “Extraordinary claims require extraordinary evidence. … She spent years exhaustively researching alternative explanations, only to be forced to conclude that the newly identified population of growing massive black holes is real.” 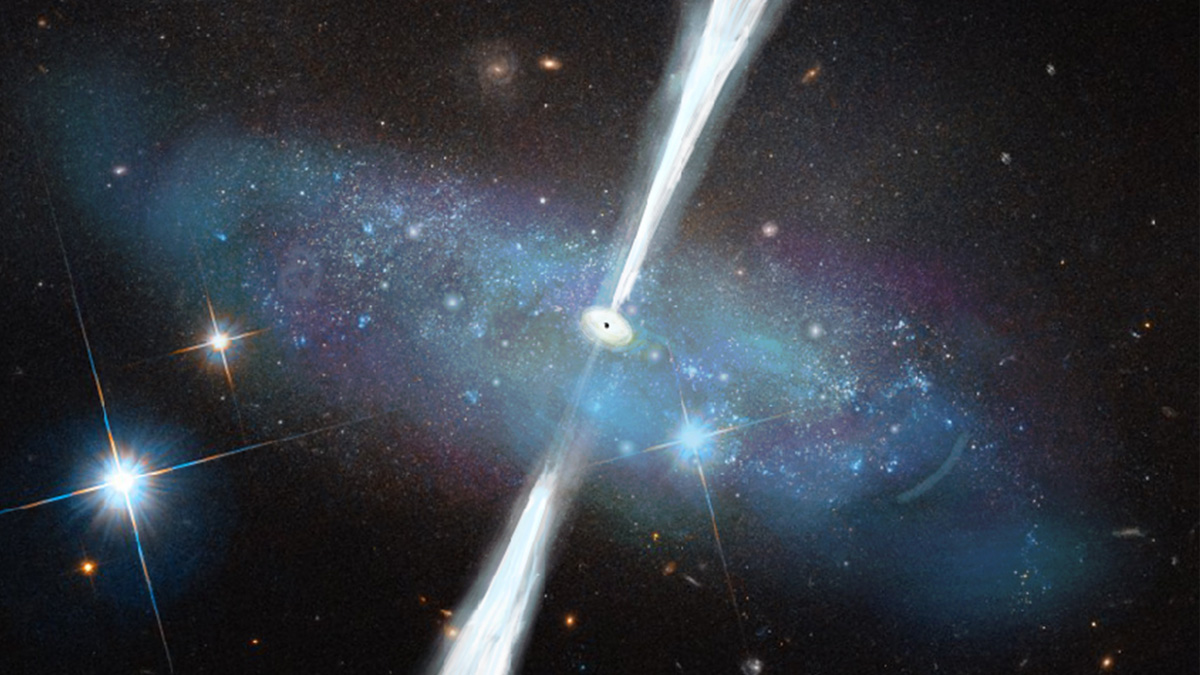 The newly discovered massive black holes reside in dwarf galaxies, where their radiation competes with the light of abundant young stars. (Original image by NASA & ESA/Hubble, artistic conception of black hole with jet by M. Polimera.)

An eye for the skies

Polimera, an international student from Abu Dhabi, and a Ph.D. candidate in the College of Arts & Sciences’ Department of Physics and Astronomy, said Indian culture and history incorporate aspects physics and astronomy, aspects of which initially drew her to the field as a child.

She recalled her father relaying mythological stories — including one of the Big Dipper and the seven stars in the Pleiades star cluster. In the Indian retelling of the story, the seven stars each represent sisters who are running to be partnered with their husbands — or, with stars that comprise the Big Dipper.

“In the past, it was really easy for people to tell a story to keep track of the stars and where they were,” Polimera said. “It’s how people remember things: You tell them a story.”

Polimera incorporates storytelling into her time as a graduate student at Carolina; she has worked to create videos for young learners to demystify what they might have learned from astronomy in popular culture, such as by watching the Star Wars or science-fiction hit Interstellar.

“That’s the part of astronomy that drives me,” Polimera said. “It’s easy to hook people and get them interested and involved in science because it’s so cool.”

As a graduate student, Polimera has received a teaching award from her department for her work teaching courses in physics, including teaching juniors and seniors in advanced electronics. Part of that work has included talking with early or undecided undergraduate students about the fields of physics and astronomy.

“That’s why I think I have stuck around in this field—it lends itself to seamlessly to the teaching,” Polimera said.

Chris Clemens, Carolina’s provost, chief academic officer and the Jaroslav Folda Distinguished Professor of Physics and Astronomy, said this remarkable research is emblematic of the dedication of faculty, graduate, and undergraduate students.

“As an astrophysicist, I know firsthand that understanding more about our universe is the result of years’ worth of rigorous research and tenacity,” he said. “What Carolina offers its faculty and students—excellence in education and providing opportunities for emerging frontiers of research—helps us begin to answer humanity’s greatest questions.”

That time to focus on her research gave her the ability to work on her dissertation and to better understand her research in context with other work in the field.

“Having summer funding gave me the time and opportunity to focus solely on the research and nothing else,” Polimera said.

“I’ve learned a lot more about statistical and data science skills from Sheila,” Polimera said. “She’s has coached me on how to associate our results with the big-picture framework of galaxies and black holes. This was mind-blowing to me since I was so new to astrophysics when I came to Carolina.”

During her time as a Ph.D. student, Polimera joined The Graduate School’s Global Grads initiative, part of its Diversity and Student Success programming. As a first-generation Ph.D. student, Polimera leaned on her parents’ support to seek educational opportunities outside of India. She and Kannappan have also worked together on diversity, equity, and inclusion initiatives; Kannappan is the associate chair for diversity and mentoring for the department.

“I never had any formal astronomy education and was asking myself: ‘Can I even do hard physics?’ And I loved it. I can’t imagine doing anything else.”